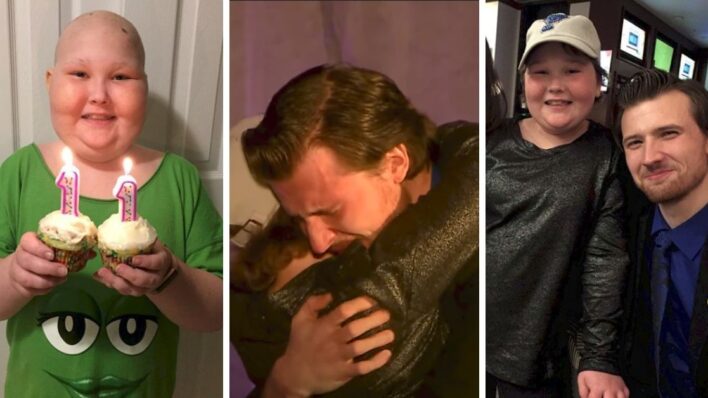 Laila Anderson was diagnosed with a extremely rare immune system disease and was saved by Kenton Felmlee who became a bone marrow donor.
By Kawter    June 4, 2020

Laila Anderson was diagnosed with a extremely rare immune system disease and was saved by Kenton Felmlee who became a bone marrow donor.

Becoming a donor is one of the highest acts of selflessness but it’s not always easy to make that decision. But when it is done, it allows another human being to have a proper chance at life.

And in some cases, like Kenton Femlee and Laila Anderson’s, it creates a new, precious bond between people who would have never crossed each other’s path.

A phone call that changed lives

Kenton Femlee, a pre-med student studying to become a doctor, was inspired by his father and his high school teacher. The latter, a high school teacher, had donated bone marrow and saved a life too. Growing up, Kenton also saw his father being treated for CVID, a disease that impairs the immune system. “There are a lot of times he’d come home from work and be extremely sick,” Kenton told KCTV.

Both his father and his high school teacher’s selflessness inspired him to become a donor too. Seeing his dad’s suffering was a decisive factor in his decision to help.

As I’ve grown up over the years, I’ve realized that he wants nothing more to have a normal life and spend time with his kids, but because of his condition, he can’t.

“That really impacted me to do my best to try to make a change in other people’s lives, so that they didn’t have to go through what my dad and my family had to go through,” Kenton added.

So he joined Be The Match Donor Registry.

Eventually, Kenton received the life changing phone call. He was the best match for a 10-year old girl. He didn’t know anything about her at the time, but the news still brought him to tears.

I had to pull over because I couldn’t stop crying. It was one of the best days of my life.

Meanwhile, on Laila’s side…

At the age of 9 years old, Laila’s childhood completely changed. “She was just a normal kid until one day, and then our whole world got flipped upside down,” Laila’s mother, Heather told USA Today.

Laila began suffering from symptoms of regular headaches and vomiting, and would sometimes become unresponsive. And one day, she collapsed as she was getting out of the car.

It took 16 months of testing, and 2 false diagnoses, before Laila’s condition was finally discovered. She suffered from Isolated Central Nervous System HLH, a very rare autoimmune disease which causes the body to produce too many immune cells. The immune cells would then attack her brain.

Basically my cells can fight the bad stuff, but they can’t really stop fighting, where my immune cells started fighting each other.

But getting a diagnosis was not the end of her battle

While they figured out the condition, there was still a long road ahead towards treatment and recovery. Laila initially had to go through chemotherapy for 10 weeks, to prepare herself for the only cure available–a bone marrow transplant.

Finding a match might not have been so simple, were it not for the St-Louis Blues hockey team. Laila, who is a self-proclaimed superfan of the team, was with her father at a Blues game when they learned about the Be The Match program. At the time, the organization was having a drive to get people to sign up to become bone marrow donors.

“That really stuck with me. And then fast forward a year later, we’re in that exact same spot, doing it for Laila,” said her father, Scott.

About 300 miles away, Kenton was at a similar Be The Match drive, signing up to become a donor. “There were a lot of times I’d be in class and I couldn’t focus because all I could think about is, there is somebody out there who, in a way unexplainable, is connected to me. I felt that connection undoubtedly,” Kenton said. Fate brought the two together.

I got the call saying that one person is a perfect match, and they not only agreed to save Laila’s life, but they said they were excited in capital letters.

On January 24th 2019, Laila received her transplant. After the operation, she had to spend one month in isolation to prevent the risk of infection. Then, months later, Laila was free of treatments.

“Now I am like any other kid. I’m a sixth grader. I go to school five days a week. The only thing I would say that’s different from everyone else is I do take medications in the morning, right when I get home from school, before I go to bed. I have blood work once a month just to see how my counts are, how my bone marrow was accepting,” Laila said.

Before Kenton and Laila met in person, the Felmlee and Anderson’s families exchanged letters. They did not know each other but they already felt connected.

And to Laila, Kenton was already a friend.

At the end of the letter that Laila had written me, she said, ‘Your best friend, whether you like it or not.’

The day of their meeting finally came on December 5th 2019, at the Be The Match Soiree in St. Louis. Kenton was hidden in a private room while Laila was backstage. She was overcome with anticipation, excited to meet the stranger who saved her life.

“I went to the bathroom a couple times, just like trying to find a way where you [Kenton] would be,” Laila admitted.

“They had people watching both me and you because they knew I was going to try to find him,” Heather said.

When the moment finally came, 11-year old Laila and Kenton ran towards each other in an emotional embrace. The touching moment was recorded on video.

He gave her a chance at life and she changed his

Kenton and Laila even attended a Blues game together. The two definitely changed each other’s lives for the better. Their touching meeting is a reminder that you never know whose life you can change by taking the step to help–no matter what it is.