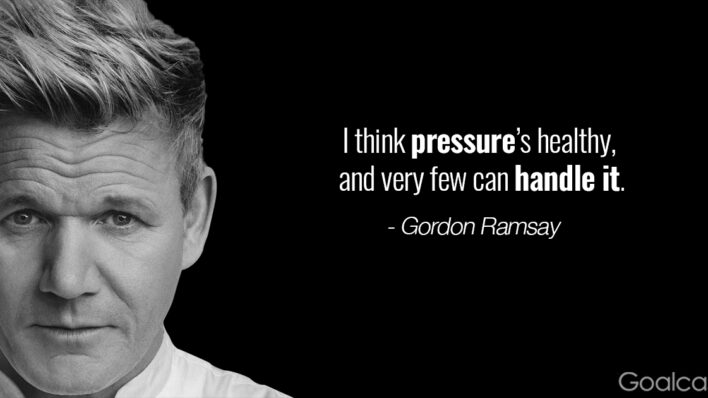 15 Gordon Ramsay Quotes to Help You Perform at Your Best

Yes, he’s that jerk that yells at his cooks. But for those who may not know him very well…there’s much
By Matt Valentine    December 6, 2017

Yes, he’s that jerk that yells at his cooks.

But for those who may not know him very well…there’s much more to Gordon Ramsay than meets the eye. Born in Scotland in 1966, Ramsay knows struggle and setbacks as well as anyone else.

Ramsay has a great passion for soccer (or football if you’re literally anywhere else in the world other than the U.S…), but when he was younger an injury caused him to prematurely put an end to his dream of becoming a professional ballplayer, forcing him to change course.

Years later, after attending college for hotel management, he went on to train with some of the world’s greatest chefs, working on his cooking craft for several years before venturing on on his own and opening his first restaurant.

Since then, he’s gone on to become a world-renowned chef and T.V. personality, earning multiple Michelin stars– the highest honor for a cook– and placing himself among the world’s most elite chefs in history.

Ramsay worked hard to get to where he is and, while he can be a hardass, it’s because he knows what it takes to win. Not to mention, he’s also incredibly humble and appreciative when he speaks outside of the kitchen (no joke). He has a lot of wisdom to share, so here are fifteen inspiring quotes from Gordon Ramsay to help you perform at your best. I don’t like looking back. I’m always constantly looking forward. I’m not the one to sort of sit and cry over spilt milk. I’m too busy looking for the next cow.

The minute you start compromising for the sake of massaging somebody’s ego, that’s it, game over.

I’ve had a lot of success; I’ve had failures, so I learn from the failure.

Put your head down and work hard. Never wait for things to happen, make them happen for yourself through hard graft and not giving up.

If you want to become a great chef, you have to work with great chefs. And that’s exactly what I did.

Swearing is industry language. For as long as we’re alive it’s not going to change. You’ve got to be boisterous to get results.

Push your limit to the absolute extreme.

Best to start at the bottom & gradually climb up. It’s much more fun, too.

Being assertive and somewhat really firm has to be backed up with being fair. I think pressure’s healthy, and very few can handle it.

I’m not critic-proof, and I still take it personally, but I take it less personally now.

Find what’s hot, find what’s just opened and then look for the worst review of the week. There is so much to learn from watching a restaurant getting absolutely panned and having a bad experience. Go and see it for yourself.

The secret is to make sure the business is running to perfection, with or without me.