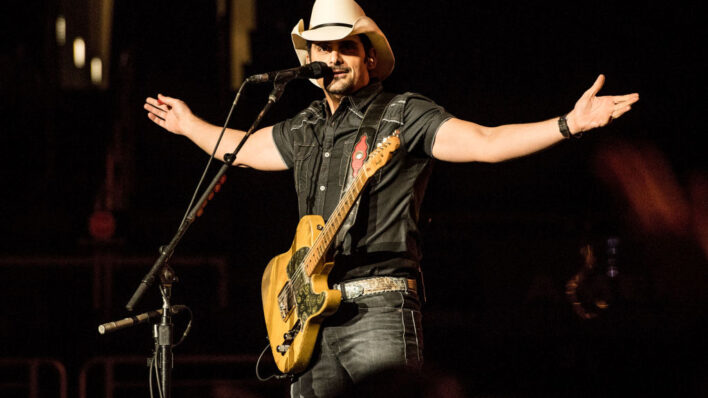 Hero of the Week: Brad Paisley Will Feed the Hungry With Free Grocery Store

Welcome to Hero of the Week, where each week we celebrate the most extraordinary stories of heroism from all over
By Eliza Theiss    April 12, 2019

Welcome to Hero of the Week, where each week we celebrate the most extraordinary stories of heroism from all over

Country crooner Brad Paisley may have sold 11 million albums and won dozens of awards, including three Grammys and 14 Academy of Country Music awards, but the 46-year-old is now capturing hearts with his charity work. Paisley and his wife Kimberly are opening a free grocery store in their hometown of Nashville that is set to feed 3,000 people a year.

The idea came to the couple while volunteering at Unity Shoppe in Santa Barbara, California during Thanksgiving. In operation for 100 years now, Unity Shoppe is a free grocery “store” that serves people in need not only with food necessities, but also with dignity and respect.

The couple, married for 15 years now, took their two sons to Unity Shoppe to “teach them about serving others and giving back to people in need,” the singer explained in a news release.

Not only did Huck and Jasper Warren (aged 12 and 10 respectively) get hands-on experience in volunteering, but their parents walked away with an idea that became The Store, Nashville’s one and only free grocery store.

Why a free grocery store and not a food bank? “We loved seeing parents making choices for their own families, rather than receiving a bag of food they might not necessarily want or need,” Paisley explained. This way, families who are down on their luck can go go The Store and have a real shopping experience, choosing their necessities and checking out for free.

The greatest privilege that anyone can ever have is to be in a position to help and serve another person.

Clients will be welcomed on a referral basis from government agencies, churches, and non-profits. They will be able to shop at The Store free of charge for one year, while they work towards self-sufficiency. The Paisleys are even thinking of adding a job-training program down the line.

“We want The Store to be a cheerful, safe place for volunteers, as well as for people who are struggling. We want those who are referred to our program to show up and feel dignity,” the country singer said.

In fact, The Store is already bringing people together to make The Store not only a reality, but a success. The country star partnered up with Nashville’s Belmont University, his alma mater for the The Store’s location. It will sit next to the university’s Ministry Center with Belmont students serving as volunteers, while the store’s design was donated by ESa, Nashville’s leading architectural firm.

Paisley’s decision to use his success to create a safe, nourishing space for people in need is a fantastic way of giving back to his community.