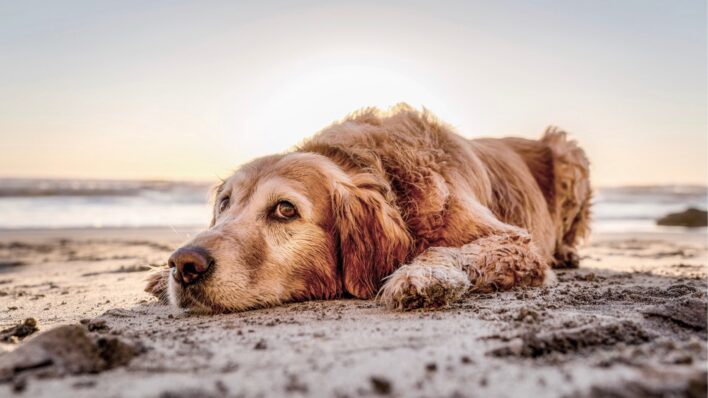 Hero of the Week: Golden Lab Saves Sleeping Owner from House Fire One Year After Being Rescued

Pampered pooches, beloved family friends, medical alert specialists, search and rescue agents — dogs play a vital role in our lives and have done so for millennia. For Muncie, Indiana resident Brad Lee, his dog is also his hero, after saving him from a house fire.

Late Monday night Lee was fast asleep, but was woken by his two-year-old Lab frantic and barking. “She was on my chest and she was barking and I was saying ‘Bella it’s not time to play,'” Lee told WTHR. He pushed her aside, but Bella was not about to give up. When Lee opened his eyes at Bella’s insistence, “the fire was on the ceiling.”

Lee’s first instinct was to run out of the house to save Bella. After he secured her leash to a pole a safe distance from the house, he ran back towards the house, hoping to attack the fire with a hose. But in the few minutes it took to get Bella to safety, the fire had blazed out of control.

Neighbors had called 911 and firefighters were soon on scene. But the fire had done its damage, especially to the bedroom where Lee had been sleeping. His bed was nothing but charred remains. But for Lee, the important thing is that both he and Bella are safe and sound. “I had maybe 3 minutes and I would have been dead. I’m just thankful to be alive and that I have Bella. She absolutely saved my life,” he told local media.

To add to the story’s heartwarming line, Bella is a rescue. Lee and his fiance had adopted her just one year ago. They had their reservations at first, since their 11-year-old pup Daisy had been diagnosed with an aggressive form of cancer. Lee and his fiance wanted to enjoy the last months they had with Daisy, but after meeting Bella, they fell in love with the brave pooch. Just one year after adopting her, Bella repayed their love and kindness by saving Lee’s life.