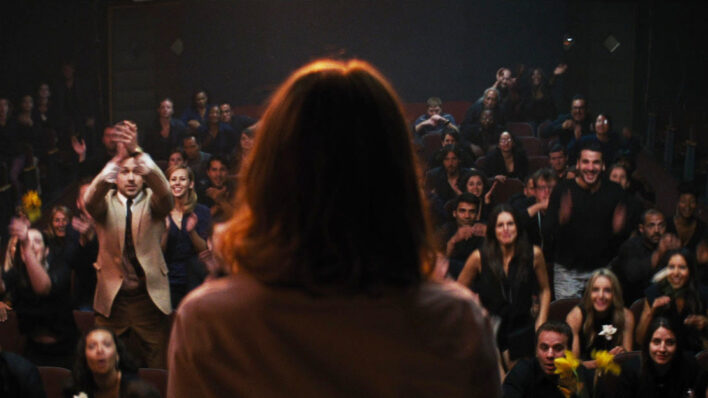 25 years ago, these high school sweethearts broke up in a coffee shop. After reconnecting at a concert, they got married at the same coffee shop.
By Aly Walansky    January 6, 2020

25 years ago, these high school sweethearts broke up in a coffee shop. After reconnecting at a concert, they got married at the same coffee shop.

Lots of young lovers have connected over conversation and steaming cups of coffee. It’s the perfect first date for many couples, and the perfect breakup for one couple in particular.

In 1992, the Dunkin’ Donuts on Grafton Street in Worcester was the site of a conversation that led to years of broken hearts… and finally, a happy ending and even a wedding, years later.

But it took decades to get there.

Why did they get married at a coffee shop?

“It had to happen here,” the groom Jason T. Roy explained in an interview with the Telegram.

“We think it’s an absolute riot,” said his new wife singer and actress Valerie agreed. “Has anybody been married in Dunkin’ Donuts before? Maybe we’ll start a trend.”

Dunkin’ didn’t even close their doors to the public during the wedding, which took place over the December holidays at 1 p.m. on a Friday afternoon.

Guests lined up and cameras clicked as regular guests at the franchise stopped by to order donuts and coffee!

One customer was confused by what was happening in the middle of their coffee run: “A wedding?”

Why they broke up

The couple had originally met at a house party at the house of one of Valerie’s friends in Grafton. Jason was attending the party with a mutual friend of theirs.

“He walked into the room, and he said to me, ‘You have the most beautiful eyes,’” Valerie recalled. “We went out for a while… We were madly in love.”

But it wasn’t meant to be– at least not back then.

Jason is “very old school,”  and when they had that 1992 coffee date, he wanted to make a concrete plan for the future where they could both succeed.

His plan? Jason was going to join the Navy. “He would acquire skills and provide a good life for us with many opportunities,” said Valerie, while she focused on developing her career in the performing arts.

But it was too much, too soon for the young Valerie, who was less sure of what she wanted.

“I felt like I didn’t know what to make of his decision,” Valerie said. “I was flattered and overwhelmed by his commitment, but equally felt he was placing a burden on himself in taking care of me.”

I said the wrong things. ‘Why are you putting so much pressure on yourself?’ I kind of crushed him. I felt awful. If he had said ‘Let’s elope’ … It was just the way he presented it.

Valerie’s uncertainty about commitment clashed with Jason’s regimented idea of what their life together would look like, and they felt they had no choice but to break up.

It was 25 years until they found each other again

Jason did join the Navy, and went on to get married and have three children. Meanwhile, Valerie focused on her career and was briefly married.

“We led two very different lives,” Valerie said. “I wouldn’t want to change a thing that happened. Jason has three beautiful children who he adores. I had a different way to give to the world through music.”

“Everything happens for reason,” Jason agreed.

But when people are meant to be, they ultimately do find each other again.

Jason and Valerie were finally reunited in February 0f 2018 when Valerie performed in a Valentine’s Day show in her hometown and there Jason was in the front row watching her performance!

He caught her eye from the front row

“I saw him sitting on the front row. I looked out almost like a deer in the headlights. I thought ‘Oh my goodness,’” Valerie said.

“When I got there I was shaking, I was so nervous,” Jason said.

Three months later, Valerie moved back home from Florida. Jason proposed to Valerie on New Year’s Eve, 2018 and they ultimately married at the same exact Dunkin’ Donuts where their relationship had ended years before.

What their love can teach us

“When you’re 18 or 19 years old you don’t understand love until you’ve lived,” Jason said. “I think we’re going to appreciate each other more so much later in life because every day is a blessing. I can’t imagine my life without him. Something led me back.”

If something or someone is meant to be, they’ll find their way back to you. In fact, the time apart made have made you better suited to each other. Never give up hope and never stop trying!