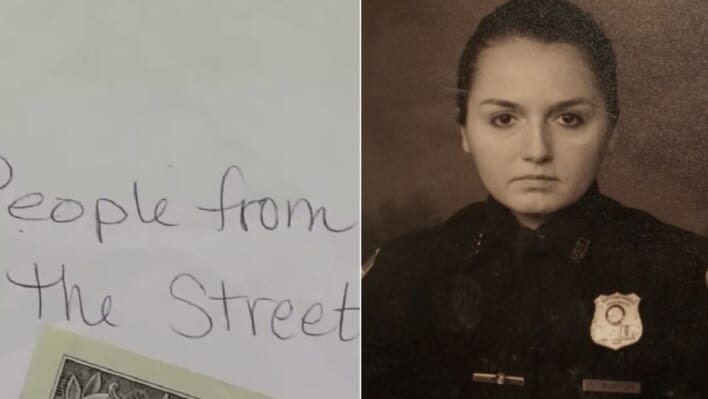 They gave everything they had. They had no idea what they would get back in return.
By Heidi Hamm    November 9, 2022

They gave everything they had. They had no idea what they would get back in return.

Four-year police veteran Seara Burton had just started her job in the K-9 department of the Richmond Police Department when tragedy struck.

She was assisting in a traffic stop when she sustained a gunshot wound to the head. Sadly, she succumbed to her injuries 39 days later.

The 28-year-old was just days away from getting married when she was shot. She had her whole life ahead of her. Described as a “warrior, a hero, and a bright star,” Burton’s death hit the community hard.

People came out in droves to support Burton, her family, and the police department. But the most valuable gift honoring her life came from an unlikely source.

A Community in Mourning Gives Everything They Have

Not long after Burton’s death, a man (who appeared to be homeless) walked into the Richmond police station. In his hand was a dirty white envelope, simply labeled “People from the Street.”

He handed the envelope to information clerk Charlotte Jones, telling her it was a donation for the fallen officer’s family.

Inside were 8 crumpled one-dollar bills — courtesy of the Richmond homeless community.

They gave everything they had – to the sum total of $8. A number that may not seem like much when you’re ordering your venti latte at Starbucks but, to those who donated, was worth everything.

“They gave that knowing they don’t know if they’re going to have another dollar tomorrow,” Richmond Police Department Lt. Donnie Benedict told CBS News. “That is as genuine as you’re going to get. I mean, that $8 was like $8 million.”

No one knows who gave the money but they do know why. The stranger told Jones that “Burton was kind and would often check in on the homeless.” They wanted to pay her kindness back.

The anonymous donor may not have left his name but what he left instead was hope.

How a Selfless Act of Kindness Inspired a Community To Give

They say that all it takes is one single drop of water to make a wave. And it turns out, it’s true. Lt. Benedict shared the story of the $8 donation at Burton’s funeral, which now sits in a frame along with the envelope and a ninth dollar bill.

“The 9th dollar that’s in this frame represents now the first dollar of the next dollar that will be given in honor of Seara.”

That dollar joins hundreds of thousands of dollars now donated to Burton and her family.

Additionally, since the funeral, donations for the homeless community have been flooding in.

“There’s hope out there,” Lt. Benedict said. “There are people out there who will give everything.” The ones in the line of duty AND the ones they serve.

Burton’s death was a horrible tragedy. But the legacy she leaves behind is proof that showing kindness to others can have a ripple effect that spreads so much further than you could ever imagine.