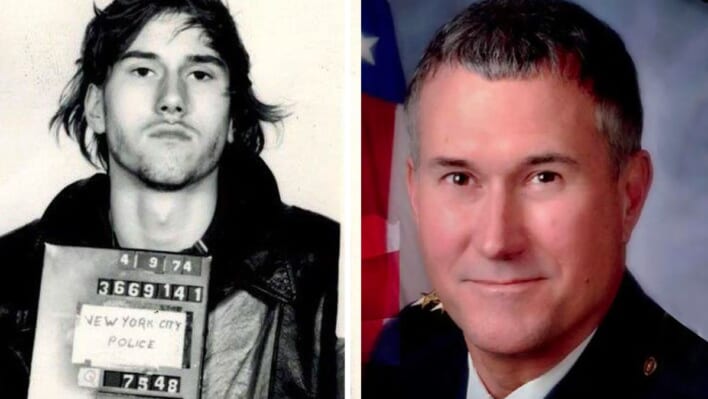 Kevin Lowry proves that it’s never too late to change.

Sometimes we have a rough start in life, or we can go down a dark path. But sometimes, it also takes us hitting rock bottom to realize we have a choice and to change how we live. This “thief-to-chief” reminds the entire world of that with his story.

Addict Parents and a Troubled Childhood

When Kevin Lowry was growing up, he lived with his parents in Queens, NY. His parents faced addiction problems, and Lowry spent a lot of time out of the house with his chosen family, members of the local gang known as the Family.

He was one of several men in the group, and the teen had already done some dangerous things. He had been arrested twice and robbed rival drug dealers and local building owners by breaking into the coin boxes on laundry machines.

At one point, he took his toddler nephew to a takedown (miraculously, no one was hurt), and he once avoided arrest by swallowing a chunk of hashish in his pocket. “It’s tough to say how high I got from it. I was probably already high before I swallowed it,” he told The New York Post. “I was struggling with self-esteem and trying to be something I was not.”

Lowry Gets a Huge Wake-Up Call

One night in 1974, Lowry hit a new and scary low. He and five other members of the Family were in the basement of a government-subsidized apartment building, and there were six guns laid out. In his memoir, From Thief to Chief: A Self-Portrait of Juvenile Delinquency and Rehabilitation, Lowry highlights how each person was supposed to grab a weapon and shoot rivals who had messed with a Family member’s cousin.

“Weather had driven the unsuspecting young men underground,” he wrote. “We called it off… that’s when I knew I had to get out.”

To get out for real, Lowry had to convince his parents to move far enough away from the Family. They relocated from Flushing to Bayside in Queens, which wasn’t a considerable distance but far enough away. “I never saw my old gang friends again,” he revealed to the Post.

Straightening Up and Getting on the Other Side of the Law

Lowry never looked back. He began working regular jobs (security officer, elevator operator) and went to college. He earned a bachelor’s degree in sociology from St. John’s University, and a master’s in criminal justice from C.W. Post. Then he did the most surprising thing: he decided to become a police officer.

“There is romance and excitement to the street,” he told the Post. “The police department promised me those things and the opportunity to do good. You have to be on the right side.”

In 1982 Lowry became a patrol officer. He spent the next 26 years working his way up to three-star chief of police and even got a law degree while attending night school. These days he’s retired from the force, owns an insurance claims company, and is just trying to do some good in his little corner of the world.

In the end, he says he owes everything to the Nassau County Police Department, who took a chance on him despite his shady past.

“I had the playbook. I knew what bad guys would do because I had done many of those things myself,” he said. “I knew how to squeeze a perp and when to give people breaks. My story is all about second chances. We need to celebrate people who take the initiative to turn their lives around.”

Everyone Deserves a Second Chance

Lowry’s story is inspiring and motivating because he shows just how far one person was able to come despite a situation that, at the time, probably looked inescapable. But by recognizing he was in a bad place and figuring out a way to leave, he could make good on his past crimes and do something meaningful with his life.

But this story is also inspiring because of the members of the police force who were willing to give Lowry that chance, despite how he might have looked on paper. By recognizing he had done the work to turn his life around and seeing how serious he was about giving back, they were able to help him make those dreams come true.

RELATED: Sunny Jacobs: The Woman Who Found Her Purpose In Prison

It’s a small reminder for all of us that people are always capable of change, which makes giving second chances an essential part of life. So the next time someone has wronged or disappointed you, maybe remember Lowry’s story and see if you can find it in your heart to forgive them and give them a second chance.

Or, if you find yourself in a dark place and are unsure how to get out of it, just consider Lowry’s story and remember there are ways and resources. Whether you reach out to those in your community, a family member, or a friend who has expressed concern, taking that first step could be the first step in achieving the life you’ve always wanted.