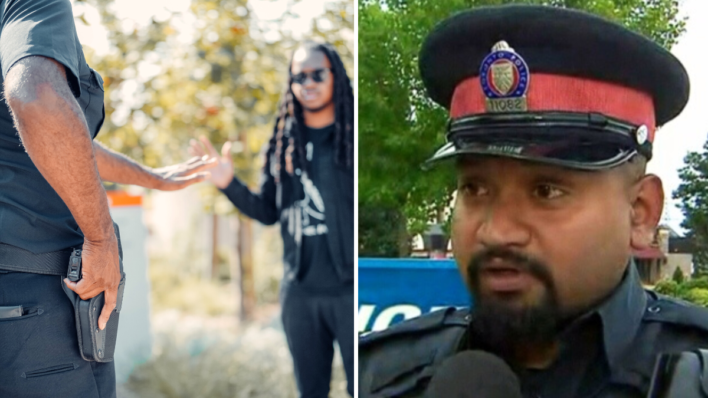 One Canadian police officer went above and beyond the call of duty.
By Amber Dowling    October 12, 2022

One Canadian police officer went above and beyond the call of duty.

Not everyone who commits a crime does so with malicious intent. Sometimes doing something illegal is the only way a person can get by, and by punishing them, you’re only pushing them further down a hole. Showing some compassion, however, can sometimes be life-changing.

Why a Struggling Man Stole Clothes at Walmart

A few years ago, employees at a Toronto Walmart called the police after the loss prevention team arrested an 18-year-old man for trying to shoplift a dress shirt, tie, and socks. Constable Niran Jeyanesan was the responding officer, and he heard the young man’s story.

“He mentioned that he had had some tough times in life. His father was sick… and they as a family were suffering with that,” Jeyanesan told CP24 News.

“This young person has been facing his own difficulties in life and he was looking to straighten out all that by providing for his family and trying to get a job.”

Rather than fining the young man or bringing him to the station, Jeyanesan decided to practice compassion instead. So he bought the young man the clothes and wished him good luck on his job hunt.

How One Police Officer Responded to a Shoplifter

Four days later, the constable confirmed the young man had landed a job. “He is starting Monday,” Jeyanesan said. “He told me he actually wore the shirt and the tie (to the interview). I’m just so happy!”

The help didn’t stop there, though. Jeyanesan also confirmed that through some friends who were willing to help out, he was able to help the young man’s father get work as well.

“This individual didn’t have any resources,” he continued. “He wanted to go get that job. That was in his mind. I think he truly made a mistake.”

How a Police Officer Proved the Power of Compassion

If we ever needed a refresher on the difference compassion rather than anger or punishment can make, this story is it. Sometimes life circumstances push people into doing things they wouldn’t normally do to get by, and sometimes that means having to do something that’s illegal or goes against their morals.

But, as Jeyanesan showed, treating people with respect and empathy and trying to help solve a problem rather than write it off can make a world of difference. The constable could have charged the teen that day and set his life on a different trajectory. But by listening and finding a solution, he was able to do something positive in this young person’s life.

It’s a reminder that we, too, should always try to listen when a situation isn’t right and understand where someone is coming from when they may have wronged or hurt you. Rather than judging someone at the outset, asking questions and trying to find the source of the problem may be more helpful for everyone involved.

And, in some heartwarming cases like this one, it could lead to a much-needed change in a struggling person’s life.