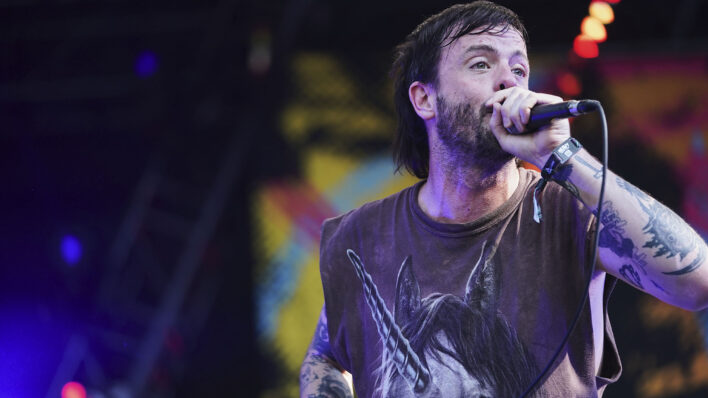 The singer and founding member of punk band Cancer Bats brought his musical dreams to fruition by going straight edge.

At 39, Liam Cormier is at the top of his game. As the singer and a founding member of punk bandCancer Bats, which he started in 2004 with guitarist Scott Middleton, Cormier has brought his musical dreams to fruition.

The Canadian band has released six critically-acclaimed albums, snagged five JUNO nominations (the Canadian equivalent of a Grammy) and toured extensively around the globe. And it all started with one important decision — a fundamental change Cormier made early in his career to become the best possible version of himself.

“I just wasn’t happy,” Cormier tells me when we meet backstage at Heavy Montréal, as he’s getting ready to perform in front of a rowdy festival crowd. “I just thought, ‘This isn’t a positive place for me to be.’”

The aspiring musician hadn’t yet started Cancer Bats, but he was already involved in the music scene. It’s a scene that often includes endless partying and excess, but he found that the drinking and drugs just weren’t cutting it anymore for him.

That’s when he discovered straight edge — a punk subculture that stays away from drinking, smoking, and doing drugs — and was inspired to make a change.

“It was definitely a process and there were a lot of positive decisions that I [needed to make] within that,” he admits.

Remembering the moment he decided to seize a new way of life, Cormier recalls: “I looked around and saw people who were straight edge who were working on bands, creating art and wanting to go on tour and I thought, ‘OK, sick! This is 100% what I want to dive into and focus my energies on.’”

Cormier jumped all in, packing up his life in Waterloo and moving 300 miles to Ottawa to be closer to his newfound tribe.

“I decided I’m moving to Ottawa and I’m going to change my whole situation,” he recalls. “I decided I’m straight edge, I’m not doing this anymore, I want to take my musical life more seriously, make this my actual focus and gravitate towards these people who are into this as well.”

He devoted himself wholeheartedly, which he cites as a major key to his successful mental shift.

“I think if I was on the fence [I might have failed], but for me, straight edge was so associated with positivity and I was just so excited about all of it,” he explains. “The language of straight edge is forever — that’s what I really loved about it.”

Cormier’s newfound lifestyle soon began manifesting positive change across all aspects of his life, which in turn gave him the drive to keep going.

As he reveals, past his second year, being around any sort of temptation became a “non-issue.”

First, there was his career

“I don’t understand how people are able to tour and drink,” he says. “Drinking and smoking were just so hard on my voice. I couldn’t even begin to imagine touring as hard as we did if I was also trying to party and drink and all of the things that would be associated with that.”

His finances didn’t hate him either

“I realized I could buy a cool BMX bike instead, which I couldn’t even have imagined affording before. I actually blew all of my money on records at that point — it was great!” he laughs. “I still have those CDs.”

Most rewarding of all were the meaningful relationships he finally built

“I think you do gravitate towards [similar] people,” he starts.

“Especially when you become busy, you’re like, ‘Well, I don’t have time if all we’re going to do is talk about nonsense.’ I don’t have time to talk about Danzig at seven in the morning with a bunch of people doing cocaine. I know Danzig is great — I can skip over that part and go to bed at two,” he quips. “You become more realistic with your time and so, naturally, you’re going to make more time for those people who are having realer conversations.”

When one of his best friends, famed chef Matty Matheson, struggled with substance abuse, resulting in a heart attack at age 29, Cormier was there to support his friend by opening both his heart and his mind.

“I was living with him when that all happened,” says Cormier, thinking back to that dark period in 2012, which sparked an entire album and a new mantra: Dead Set on Living.

“It was me being able to deal with it,” he says of the writing process. “Me being able to wrap my brain around some of these conversations that we were having and showing my friend how much it meant to me.”

“That’s how I learned about the 12 Step Program, from talking to Matty about it, and there’s so much about the step work that I think is great for everyone to keep in mind,” he notes.

“I feel like there was a point where, for me, I almost used straight edge as [an out], like, ‘I’m fine, I’m straight edge, I’ve done the work,’ but then you learn about these other things that no one’s talked to you about, like step work or Inner Quest, and you realize there’s still so much stuff that you need to come to peace with in your own life,” Cormier explains.

“We should never stop looking at why we interact with people in certain ways and how we can use this as a starting point,” he elaborates. “I think of sobriety so much differently now where it’s just the beginning. Let’s move on to bigger ideas. Let’s move on beyond money and let’s move on to how we treat each other.”

Some of that change is already happening: “We’re in more of a culture now where people want to talk about mental health.”

Cormier continues: “Male suicide is something that’s finally being talked about. [Before it was], ‘You’re not allowed to talk about mental health as a man’ and it’s like, no, you’re just a person with a brain. You can have trauma that you haven’t dealt with that’s now the reason why you’re drinking. But you have to admit that you have this trauma before you can look at why you’re even wanting to drink as a release.

“I think we’re finally in a world where we’re actually taking some of that stuff seriously.”

The most valuable lesson

Amidst everything that Cormier has learned through his own journey, there’s one early lesson that stands out, which helped put everything into perspective.

“A big thing for me was realizing that I was still having just as much fun,” he states. “I was still doing the exact same things, but the hangover side of it wasn’t slowing me down the next day or derailing me. I wasn’t missing out on any opportunities.”

Because the most valuable opportunities are the ones you’re bold enough to make for yourself.