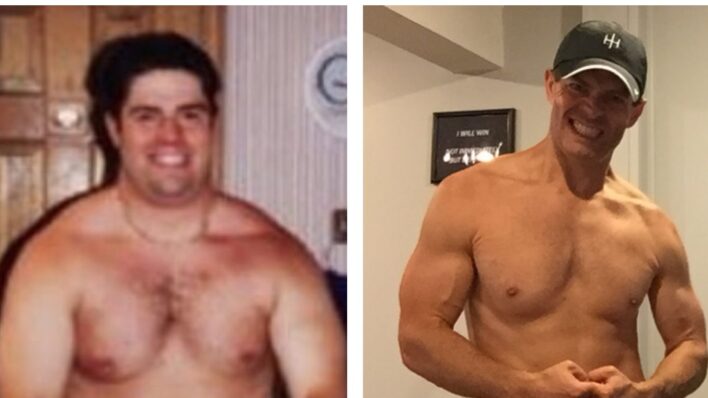 Rich Bracken is a motivational speaker, podcast host and currently working on his first book, but things haven’t always been
By MJ Kelly    August 3, 2018

Rich Bracken is a motivational speaker, podcast host and currently working on his first book, but things haven’t always been this way. As a child, he was active and healthy but in the 3rd grade was diagnosed with exercise-induced asthma. He began gaining weight rapidly and as a result, losing confidence.

“I went from playing sports year round to playing video games and eating junk food year round.” He experienced a lot of self-doubt, and those feelings ended up haunting him for years.

Up until his sophomore year of college, he struggled with his weight and self-esteem.

He was a football player and at his heaviest weighed 260 pounds. “It became my identity to be this big protector, so I worked out and ate a ton to be as solid as possible.”

After playing for a year, he gave up the sport and eventually stopped working out, but he didn’t quit his poor eating habits.

“I felt sluggish and tired all of the time and my insecurities were at their peak,” he said.

He was self-medicating by drinking and eating, which only made things worse for him. For the second time in his life, Bracken found himself in the throes of depression until he woke up one morning feeling like he couldn’t stand to feel that way anymore. “I felt like I had given up on myself, and I felt sorry for myself all of the time,” he said.

It was that one morning, in that moment, staring at himself in the mirror, hating what he saw, that he knew something had to change.

Usually one to make excuses and give up easily, his new found resolve was out of character for him but ended up guiding him throughout a journey that would completely change his life.

“I wanted to lost weight for the long haul, not a quick, short-term solve,” said Bracken. “I sought out a nutritionist and a trainer because I wanted to educate myself on how to make the change the right way.”

The concept of taking control of his life was terrifying and exhilarating all at once for the now 42-year-old. Shedding years of bad habits was daunting and seemed nearly impossible but something kept pushing him in that direction.

He lost 15 pounds quickly which encouraged him, and from then on the process seemed more do-able. “I saw the results of my choices paying off and it became my source of pride,” he said. “I started walking, lifting weights, doing yoga and making better food decisions.”

For Bracken, it was about losing weight and gaining knowledge.

“I educated myself a ton on caloric content, ingredients and other nutritional information about the foods I typically ate,” he continued. “When I pulled the curtain back on how bad it was for me, or how many calories were included in certain portion sizes, it made it a lot easier to walk away from certain foods.”

22 years later, he’s been able to keep off the 100 pounds he worked so hard to lose and has learned that he could do anything he put his mind to. More importantly, he’s learned that the only was to make important changes in your life, is if you do if for yourself.

“When you’re not doing it for your own happiness, you are subjecting your personal satisfaction to the discretion of others,” said Bracken. “Once I learned to love and appreciate myself and live from the inside out, I fully embraced happiness.”