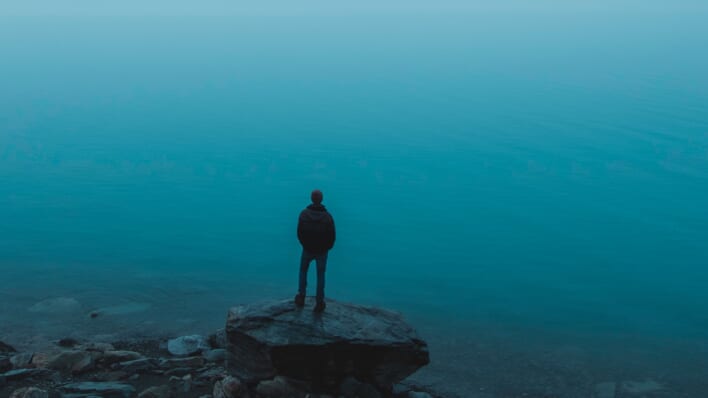 Thalassophobia: What Is “TikTok’s Favorite Phobia” and How Can You Conquer It? 

You can get over your fear and get back in the water.

What is thalassophobia, and why is it a strangely popular phobia right now? The first part of that question we can handle — as for why so many people find this phobia so interesting, perhaps it’s just that unshakable fascination humans feel for the sea. After all, what we don’t know much about tends to frighten us, and fear is, for better or for worse, compelling.

But to the phobia.

RELATED: You’ve Seen It All over YouTube and Netflix but What Is ASMR?

Thalassophobia is a fear of deep bodies of water. For many, it is specifically a fear of the ocean or the sea, but indeed it can be a fear of lakes, ponds, or even swimming pools. Phobias do not discriminate when it comes to their manifestation, but they can play crippling role in a person’s life, limiting the quality of a person’s very existence. Thus, it’s all the more ironic and unfortunate that, for many people, thalassophobia has become something of a joke, while for others it’s a source of fascination.

Anyone living with a genuine phobia of deep bodies of water will tell you it’s no laughing matter at all, and is a source of anxiety, suffering, and limitation, not a mere topic of interest. Fortunately, for this and most phobias, there are steps you can take to mitigate your intense fear of the water. You may even be able to step back into the sea, lake, or pool in time. And at least you can avoid a panic attack at the mere thought of deep water once you have worked on your fears, whether through exposure therapy, with the help of a mental health professional, or by some other methods. We’ll discuss those soon, but first let’s be clear about what a phobia is, anyway.

What Constitutes a True Phobia?

A phobia is not a dislike. It’s not a source of annoyance. It’s not a concern. It’s a source of terror, it’s not rational, and it’s something over which you feel you have no control. According to Johns Hopkins Medicine: “A phobia is an uncontrollable, irrational, and lasting fear of a certain object, situation, or activity. This fear can be so overwhelming that a person may go to great lengths to avoid the source of this fear. One response can be a panic attack. This is a sudden, intense fear that lasts for several minutes. It happens when there is no real danger.”

Phobias come in all sorts of varieties – many are officially recognized in the diagnostic and statistical manual (the DSM for short) while others are generally accepted though not specifically noted as anxiety disorders.

Someone afflicted with a phobia may have their mental health badly impacted by their fear, and they may even experience physical symptoms from it, such as nausea, headaches, shortness of breath, and more. Phobias reduce the quality of life in myriad ways.

When it comes to thalassophobia, not only can the fear cause the aforementioned maladies and more, it can also greatly limit what a person can do. Swimming in or boating on the sea or a large lake or the like is almost surely not an option, but for other people with severe thalassophobia, even flying over a large body of water may be impossible, so travel and new experiences are curtailed.

A fear of deep bodies of water can of course be brought on by life experiences. A near drowning, an experiencing of a boating accident (or even a sinking), a sighting of a shark or other unsettling animal – these experiences can all contribute to a fear of deep water.

So too can second hand exposure to such things cause thalassophobia. Just consider the effects the Steven Spielberg movie “Jaws” had on thousands of people who developed a potent fear of the water just from seeing the film. Or consider the rather morbid fascination many of us have with stories of sunken ships, most notably the Titanic. Reading about, hearing of, or watching dramatized accounts of fearful marine occurrences can bring on a real fear of the water.

RELATED: How Emotional Health and Wellness Can Affect Your Life – And 7 Tips to Improve Them

Then there is also plenty of evidence that, for some people, thalassophobia may be a veritably predetermined condition. Some people may perceive vast, open water as a cue to think on the depths of their own soul or psyche. Some people may also have a fear of the unknown, and by its very nature deep water is a vast source of that: we never know what lies beneath the water until we go there, which is very hard for a person with this phobia to do.

How to Reduce the Intensity of Your Thalassophobia

There may be no way for you to fully get over a fear of deep water, but with some effort and perhaps with some support, you can likely reduce your fears to the point to where they will not consume or control you.

With anything that negatively affects your mental health, it’s always a good idea to consider support from a professional. Cognitive behavioral therapy may help, as may medication if your anxiety is acute and persistent enough. You can also consider things like mindful meditation, calming breathing exercises, and more.

If you are considering an exposure therapy approach to dealing with your thalassophobia, start small. This can mean watching movies or reading books that will expose you to deep, open water in an imagined way, to talking about the source of your fear with others, or even via virtual reality exposure.

Next, you can try swimming in a pool before you go near the beach. You can visit an aquarium to see marine life in a safe environment. And you can stroll on the dock before you board a boat.

And then also consider this: it’s OK to be afraid of deep water, you can just avoid it. Assuming your fear is not so intense you could not even fly over the ocean in a plane, then it may be best to work mindfully toward accepting your fear and calming its intensity by simply avoiding its source. If you know you’ll never be in the open ocean or upon a vast lake, you don’t have to worry about it that much.