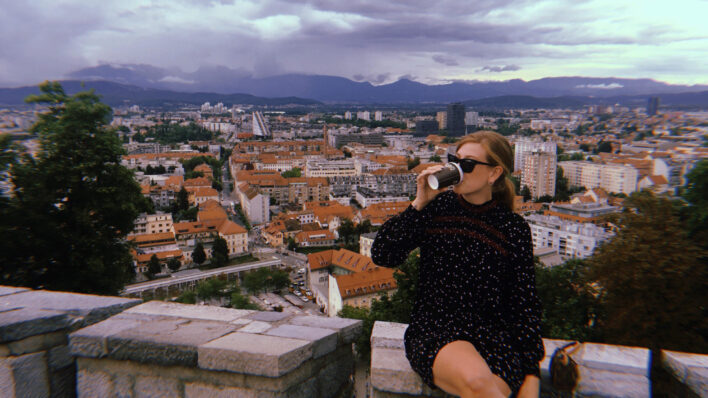 Introverted Tendencies: I Traveled to Europe with a Group of Strangers and Left All Social Media at Home

Having an introverted personality may mean that you prefer to recharge your social batteries alone, but it doesn’t mean your
By Kaitlyn McInnis    August 21, 2018

Having an introverted personality may mean that you prefer to recharge your social batteries alone, but it doesn’t mean your relationships, confidence, or ability to have fun in a group has to suffer because of it. In this column, our Managing Editor is on a mission to change how she sees herself and interacts with the world — from inward reflection to outward actions and breakthroughs both personal and through the lens of others, this is how she’s challenging self-imposed social limitations and pushing the boundaries of her own comfort zones. Welcome to Introverted Tendencies.

If you didn’t post it on social media, did it really happen? I think it’s safe to say that everybody has a complicated relationship with social media. Yes, it’s a great way to see what your friends are up to and, of course, to update them on your own life, but the all-encompassing digital world can much too easily take the front seat, sometimes leaving real life experiences in the foreground.

Having 24/7 access to social media has become an easy tool to distract yourself on the subway or while waiting for a friend, to pull yourself out of an awkward encounter, or to use as a crutch when faced with social interactions and conversations. It’s much easier to take a quick Instagram break than to sit through an awkward silence, after all.

RELATED: 6 Reasons Why Social Media Gets in the Way of Life

For me, the latter was becoming more and more of an unignorable issue in my life. I would always ensure my phone was fully charged before a party, before drinks with colleagues, even before informal dinners with my closest friends. I also carried an external battery pack, you know, just in case I was away from an outlet for longer than expected.

No matter where I went, my phone was never more than a few inches away from my fingertips — acting as a security blanket should I start feeling awkward, uncomfortable, or starved for something interesting to say.

Despite the fact that using your phone at dinner or midway through a conversation has become socially acceptable, it doesn’t mean it’s a good thing. As someone with introverted tendencies, thanks to my phone, it has become far too easy for me to escape real life when I feel the need to shy away from a social interaction.

In search of a change It was getting to the point where some of my close friends were commenting on my heavy social media use in front of them — and it was then that I realized I needed to make a change. Why was I even on social media when my closest friends were right in front of me? What could I possibly be looking at that was more important?

Not one to do things halfway, I decided that instead of putting a time-limit on certain apps or leaving my phone at home when I go for drinks with friends, I would say goodbye to Instagram, Snapchat, Twitter and Facebook and take a trip to Europe with a group of strangers for a fully enforced social media detox.

I joined fifty other travelers on Contiki’s 5-day Mini Balkan trip across Hungary, Slovenia, and Croatia. I knew Contiki was the right travel company for my personal experiment because of their emphasis on real social interactions and forging new friendships — they specifically emphasize that by the end of the trip, everyone should feel comfortable sitting next to anyone from the group around the restaurant dinner table or on the coach.

This concept sounded absolutely terrifying to me, a shy and somewhat awkward introvert, but it’s exactly why I chose to do it for my social media detox.

What if there are awkward silences?

As the date of departure drew closer, I started getting more and more nervous. I found out I would be sharing my hotel rooms with a stranger, so I wouldn’t have alone time to unwind after uninterrupted socializing all day. It also meant that I would need to have conversation starters ready from the time I woke up until the time I went to sleep.

I packed an actual deck of playing cards. I looked up conversation starter questions to have on hand. I was determined to come prepared as to avoid any possible awkward silences that I wouldn’t be able to ease by checking my phone.

Socializing can be exhausting

I arrived in Hungary and realized that the tour leaders at Contiki are extremely quick to try and break the ice among travelers. Much to my chagrin, there was no getting to know everyone over wine or even in a group setting; I had barely met up with the rest of the travelers for an hour before I learned that we were going to get to know everyone via a 2-hour round of one-on-one “speed dating” while our tour bus drove us to the next city.

The idea was to speak to each traveler for three minutes, before rotating to the next person. I felt sick with nerves for the first few rounds, but I found that after each interaction, the urge to check my phone started to go away, I started gaining confidence in what I had to say, and I ended up impressing myself with how easily it was to chat with strangers when there was no social media induced exit plan available.

That said, once the speed dating activity wrapped up and we arrived at our destination, I immediately took a nap to recover from the effort of chatting with so many new people. While it was becoming slightly easier, speaking to fifty people back-to-back was a challenge.

Where do I look if not at my phone? Luckily, I made a crew of like-minded Contiki travelers right away, which made me feel a little less afraid of being without social media — my security blanket — for the next five days, but I would be lying if I said the habit had been broken just like that.

I had become so used to checking my phone after saying something I thought could have been perceived as weird, or after running out of interesting things to fill the conversation, that I honestly didn’t know what to do with my eyes when I was at dinner with my new friends and the conversation started to naturally die down.

Usually I’d just grab my phone and start scrolling, but without my quick and easy escape, I was forced to live through whatever awkwardness I was feeling and push onto the next moment or own whatever ‘weird’ topic of conversation I put out there.

By day three, the weird topics of conversation evolved into jokes about starting a conspiracy theories podcast, conversations dissecting quirky Ellen interviews and impromptu, made up drinking games. It turns out, the crew I clicked with was just as weird as I was.

What was I supposed to do when everyone else was plugged in? Of course, I was the only one without social media on this trip. While I chose to disconnect from my world back home, everyone else still wanted to stay up to date with theirs.

So what was I supposed to do when everyone was on their phone?

I took everything in. While everyone else was updating their Instagram or messaging friends back home, I really looked out the window and watched the Slovenian countryside pass by. I took the time to fully savour the delicious food in front of me at dinner. I started writing my passing thoughts in a notebook like I used to do when I was younger, before passing thoughts became tweets.

Hear me out: while the first few days felt hard and undeniably awkward, half way through the trip it sort of felt like the first time I traveled abroad as a high school student — before there were cellphones and laptops to keep me fully plugged in the entire time.

I was able to really experience everything around me and actually appreciate what I saw, rather than scouting the next picturesque thing for Instagram and missing what might be a defining moment.

Occasionally unplugging is worth the effort Avoiding social media meant having to learn about my peers by asking questions and listening to the answers rather than looking at their social media feeds to get a feel for who they are. I met some incredible people on this adventure from all over the country, people I consider friends, people I will miss now that I’m back home.

I can’t help but wonder if these connections would still have been made if I was opting out of our interactions to check and see what was happening on Instagram.

By the end of the trip, I can safely say I didn’t miss social media as a form of punctuating conversation. I felt confident in my ability to lead conversations and although the fear of awkward silence was still there, I didn’t let it stop me from interacting, being myself and forming bonds in real life, with real people.

Despite it all, I don’t think giving up social media for good is a valid option in today’s world. While I didn’t miss the impulsive scrolling that had become a thoughtless habit, I did wish I had my Instagram to follow all the new people I met and to see their perceptions of the experiences we shared translated for their social media feeds.

With that in mind, at the airport while waiting for my flight back home, I re-downloaded social media and invited my new, real-life connections from Contiki to my digital world. Social media can be a great tool to keep in touch and stay connected. But, just like everything else in life, moderation is key.

Do you have introverted tendencies, too? I want to hear from you! Share your breakthroughs, experiences, and social challenges with me at kaitlyn@goalcast.com.