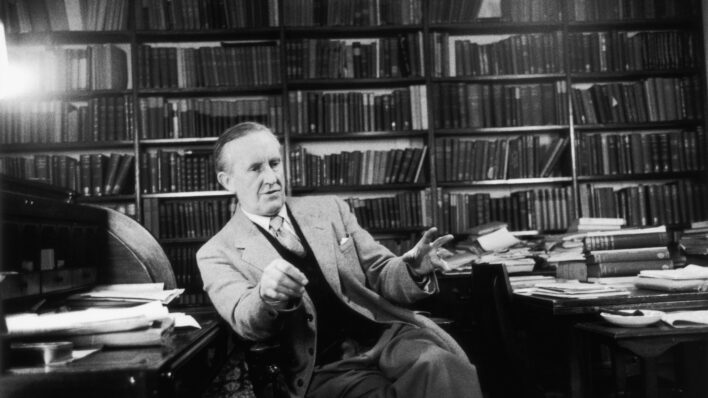 3 Lessons from Legendary The Lord of the Rings author, J. R. R. Tolkien

With March 25th being Tolkien Reading Day, it’s as good a time as any to reflect on the legend of
By Matt Valentine    February 28, 2019

With March 25th being Tolkien Reading Day, it’s as good a time as any to reflect on the legend of The Lord of the Rings author, J. R. R. Tolkien.

Originally intended as one volume but published in three parts between 1954 and 1955, The Lord of the Rings (or simply LotR for short) is considered by many to be one of the greatest novels ever written.

But the life of author and scholar J. R. R. Tolkien is arguably just as interesting, having been obsessed from a young age with language and eventually going on to develop and invent several of his own languages, serving in both WWI and WWII, and being a part of legendary writer group the Inklings, which included another famous author, C. S. Lewis.

Much of Tolkien’s life can serve as inspiration, especially for those who are working now towards the pursuit of some passion to which they can not dedicate their full time to, Tolkien himself not writing fulltime throughout most of his life; even, surprisingly, while completing The Lord of the Rings.

*Note: For a great biography on Tolkien, check out Humphrey Carpenter’s J.R.R. Tolkien: A Biography.

In 1914, then 22-year-old John Ronald Reuel Tolkien read a phrase in an old English manuscript which would inspire him to eventually create one of the world’s most beloved fantasy novels.

The word was “Middle Earth”, and from it came a short poem in which he wrote about “hobbits” and a world very different from our own.

But the road for Tolkien to realize his sprawling story wasn’t a short one. In fact, just the timeline itself is mind-blowing:

How’s that for patience? From the moment Tolkien read the old English manuscript and was inspired to the moment The Lord of the Rings was published was nearly an incredible four decades.

The thing is, the only thing in the world that can keep a person going for that long is passion.

Nowadays, much of the focus is on achieving results in as little time as possible and very little value is placed on patience and the importance of allowing things to develop.

Most of the time, you have no control when something happens. You simply need to be patient enough to allow it to happen while you continue to work and let your passion guide you and keep you moving forward.

Without a true passion for something, patience isn’t possible. And without patience, your chance of realizing any grand goal is low. Find your passion, latch on with everything you’ve got, and don’t ever let go.

2. You can create something amazing (even with your day job)

Throughout the time that Tolkien was writing and developing his Middle Earth mythos and the stories that would come from it, he was enlisted to serve in WWI, assisted in WWII, and later worked mostly as a professor at Pembroke College.

It was never his day job to write until he was later retired and, by the time The Hobbit was published, Tolkien was already well into his forties.

To me, learning this was extraordinary. So many of us convince ourselves that we need to drop everything and “venture out” to make our dream come true. Because of this, we let financial and family responsibilities stop us.

But the truth is if you’re smart and disciplined enough with your time, you can create something amazing with any amount of time.

The only true measure is consistency. Can you set up a time each day where you work toward whatever the effort is, however little? Can you track your progress and do you make adjustments over time based on that information?

If you can do that, you can do virtually anything over time with even one hour a day.

3. Know what is most important to you and believe in it no matter what

As a professor and expert philologist (the study of language in oral and written historical sources), Tolkien could have spent more of his time contributing to his field as a scholar.

However, Tolkien knew what his passion was and what was most important to him. And that is what he devoted his time to, even when his colleagues criticized him for writing children’s stories, poetry, and creating his own languages.

Many of us allow our actions to be dictated based on the believes, values, and perceptions of others. It’s hard believing in yourself when we’re programmed to look around us to others to see what we should be doing.

When we see that we’re different, we feel apart from the group and that makes us uncomfortable. In the past, physical separateness from the tribe meant literal death, so we’re still trying to shake off this old programming.

Tolkien fell in love with his self-created mythology and all of us have the fruits of his labor to enjoy for it. What could you create if you had the same belief in yourself and your own passion?