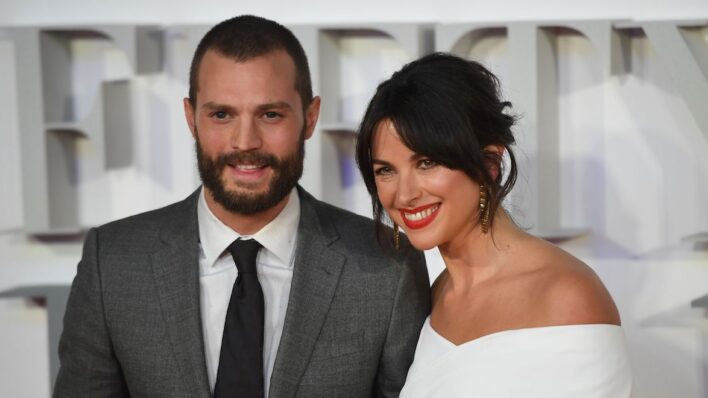 Known for playing Christian Grey in Fifty Shades Of Grey, Jamie Dornan’s real-life relationship could not be more different than his onscreen one.
By Barbara Pavone    June 26, 2020

Known for playing Christian Grey in Fifty Shades Of Grey, Jamie Dornan’s real-life relationship could not be more different than his onscreen one.

Jamie Dornan became a household name when he was cast in the Fifty Shades of Grey movie franchise in 2013 after Charlie Hunnam walked away from the role at the last minute.

Jamie played the domineering Christian Grey on screen, but as it turns out, his real love life is the polar opposite of what fans saw in the 50 Shades saga. The actor has been in a blissful relationship with British actress-turned-musician Amelia Warner since 2010 and their marriage is the epitome of supportive, unconditional love.

Here’s what we can learn from Jamie Dornan and Amelia Warner’s top-secret union:

Jamie Dornan and Amelia Warner are extremely protective when it comes to their personal life, but over the years, they have offered fans a few rare glimpses into their solid union.

According to Grazia, the pair first met at a party back in 2007 but, as the Independent reports, they didn’t officially become a couple until 2010. Jump to 2013 and the pair tied the knot and had their first child, daughter Dulcie. Daughter Elva followed two years later and, in March 2019, they welcomed Baby No. 3 whose name has yet to be revealed to the public.

In 2015, Jamie Dornan was asked if Amelia Warner had any habits that irritated him or quirks he had to get used to. In one simple answer he managed to reveal just how strong their relationship is.

I was smitten from the start, I really was. I’m more in love with her today than I was at the start, so no.

That unfaltering devotion was pivotal to navigating the tabloid rumors that plagued them after Jamie’s Fifty Shades debut. While numerous outlets speculated that the couple’s marriage was on the rocks due to Jamie’s steamy on-set encounters with co-star Dakota Johnson, the pair simply tuned everyone out.

“The more public interest there is in you, the more horrible people become,” Jamie told The Telegraph. “People start to say disgusting things about your family, about your children.” But when your bond is truly solid, no amount of negativity or speculation from the outside world can derail your relationship. Especially when you have more important things to focus on.

Opening up about her husband’s newfound superstardom, Amelia Warner revealed, “It doesn’t impact our life much in a day-to-day way. Nothing has really changed in our lives since Fifty Shades,” she reassured, adding, “The biggest change for us was having kids […] We are very removed from all the hype. I don’t see that stuff in the papers,” she concluded.

Jamie echoed that sentiment to Entertainment Tonight, telling the outlet, “You know, I sort of don’t feel like [my life] has changed that much. The making of these movies coincided with me becoming a father, and I’ve had two kids in the time we’ve made these films, so that’s changed my life immeasurably,” he explained.

“It is totally life transforming,” he continued. “So, in a way, it’s been great because […] it’s been the perfect distraction from what would be changing my life if they hadn’t come along — if it was just about this franchise.”

When Jamie Dornan was cast in Fifty Shades of Grey, not only did that push him and his wife to the forefront of the tabloid rumor mill, but Amelia had to contend with the fact that her hubby would be engaging in some seriously X-rated scenes. What’s more, she was pregnant with their first child at the same time.

Speaking with OK! magazine, Jamie sang Warner’s praises, noting how important her unconditional support was to his success.

My wife is a brilliant, hugely understanding person.

“A lot of people would have had a s*** fit at 30-something weeks pregnant hearing, ‘Darling, we’re going to Vancouver this week for four months — we’re going to have a Canadian baby and I’m going to do a film where, for parts of it, I will be naked.’ That’s a tough pitch, but my wife is an incredible person,” he gushed.

Sitting down with Jimmy Kimmel, Dornan further recalled the sacrifices his wife had to make while he pursued his career, namely doing a lot of the parenting on her own. “The first [child] we had in Canada, and I started filming three days after she was born,” he said. “The second one we had in London, and I flew to Canada ten days later and started filming the second [movie].”

Explaining that he’s “never missed a birth — I couldn’t live with myself if I missed the birth,” Jamie did admit he “was sort of at the mercy of Fifty Shades‘ schedule.” Which is why, during Amelia’s third pregnancy, he made a vow to do things differently. “I think for this one, I’m going to have a lot more control […] This time, I’m trying to take proper time off for a few months after as well,” he promised.

And the support goes both ways. When it comes to Warner’s career in the music biz, her hubby is her biggest fan. In June 2020, he promoted her latest album on Instagram, writing, “My wonderful wife @awarnermusic has an EP out today. Buy it or stream it or do what you want with it.”

Family is absolutely everything

Jamie Dornan may be incredibly secretive when it comes to his family life, but ask him about fatherhood and he can’t help but light up. He’s incredibly devoted to his wife and kids and that may have something to do with the fact that he lost his own mother at 16.

“It totally derails you and ends up having a huge bearing on who you become,” Jamie admitted in 2018. “I don’t think I really knew what the effects were at the time, but I do know I’m definitely a different man today as a result of losing my mother so young.” A man who wants to be the best person he can possibly be for his own family.

“Being a dad is the best,” the actor told the Sunday Times in 2018. “I feel a healthy and lovely duty to provide for my kids, and I really like it. It suits me,” he said.

Making my kids happy is a good thing for my wife and me to be driven by.

Which doesn’t mean everything is always perfect in the Dornan-Warner household. Admitting that, like any couple, he and his wife do occasionally fight, Jamie told the outlet, “We get frustrated at times, usually when traveling with the kids, but we’d never let anything boil and become a thing. We know couples who are plate-throwers, but that’s just not us. I’m glad it’s not us — plates are expensive,” he joked, adding, “Certainly there’s never a day that I don’t tell her I love her.”

It’s that commitment to supporting each other, prioritizing their family, and not letting anything get in the way of their love that has granted Jamie Dornan and Amelia Warner seven years of wedded bliss — and counting. When you can trust in your partner and love them unconditionally, it’s easy to block things out and not allow them to come between you. Voicing your love for one another every single day doesn’t hurt either.