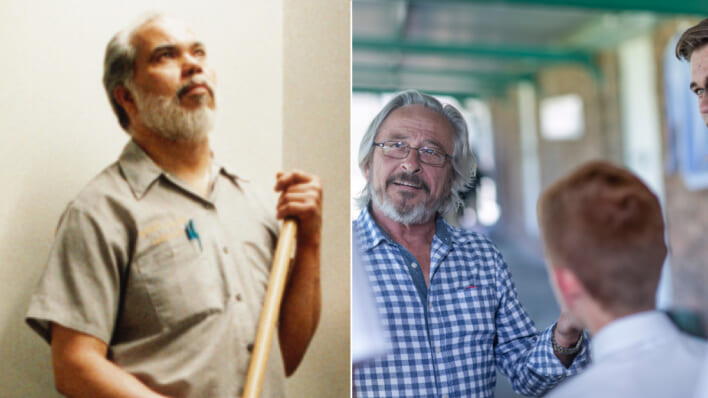 From custodian to principal, a California man named Mike Huss proved what can be achieved when you work hard and have clear goals.
By Lindsey Staub    September 10, 2022

From custodian to principal, a California man named Mike Huss proved what can be achieved when you work hard and have clear goals.

One man has become the principal at the very school he once cleaned as a janitor, proving that hard work and dedication can get you where you want to go.

Mike Huss says he feels “blessed” to have had his expansive career and to start a new chapter at Ione Elementary School in Ione, California, a small town outside of Sacramento. This new chapter consists of him leading the school as the principal, but his first chapter started as the janitor.

Why a California Elementary School Fell Loves Its Janitor

Not only did Huss keep the campus clean, but he also made a point to connect with the students.

“A lot of teachers here at Ione Elementary kept saying, ‘You’re wasting your time. Look at these kids. They are attracted to you … and they want to be around you and they learn from you. You need to go back and became a teacher,'” Huss said.

But becoming a teacher was never Huss’s plan.

He took the job as a janitor so he could support his wife Karen as she pursued her dream of going to college. For Huss, higher education wasn’t something he was interested in.

However, after he and Karen had their first child, he had a new motivation to become a teacher.

“When my son was about 3, I said, ‘You know what? I want to show my son that you can keep growing in life,'” Huss said. “I know he was young but between the encouragement from the teachers on campus and the motivation to do something to show my son nothing’s impossible, I went back to school in the late ’90s to get my teaching credential based on those inspirations.”

That’s when Huss began to balance his full-time job, his role as a father, and school. Huss would work from 2-11 p.m. on Mondays, Wednesdays, and Fridays and from 6 p.m. to 2 a.m. on Tuesdays and Thursdays, all while he attended Sacramento State during the day. This juggling act lasted four years.

“I was working 40 hours a week, coaching my niece’s softball team. I was going to school Tuesday and Thursday all day,” Huss said.

Less than a week after his graduation, Huss was hired as a teacher at Ione Elementary.

“I was literally the school janitor on a Monday. I worked a double shift. I worked from 6 a.m. till about 10 p.m. that night, getting the school ready. The very next day, Tuesday, I was in my first teachers’ meeting. Thursday of that same week, I had my first class,” he said.

How the Beloved Janitor of a School Became Its New Principal

It has only been a few weeks since Huss took over, but he has a lot of support.

“I really think that I can do this job … because I have the support of everyone,” he said. “I have to try my best every day for them. And at the end of the year, I’ve told many people if the worst thing I say is, ‘I tried my best and failed,’ I’ll try my best again next year and hopefully be even better. And I try to keep that perspective.”

The Amador Country Unified School District, his staff, and his students have helped him in his new role.

“They give me hugs and say, ‘You’re doing a great job,’ and it’s really cute to see a first grader tell you that. ‘You don’t even know what I’m doing. But thank you very much for saying it.’ But they see me out and interacting so I think to them, that’s all that matters,” Huss said.

Huss has referred to his work as “a very rewarding career” and wants others to learn the importance of schools and teachers from his story.

“What I want people to understand is that there are really good teachers out there doing really amazing jobs,” he said. “It’s just about growing a world, making it a better place.”

What Mike Huss’ Janitor-to-Principal Story Teaches Us About Effort

Huss put in the work and time, and with a community behind him, he went from being the school janitor to being its principal. His story shows what’s possible when you put your heart into achieving your goals and when you surround yourself with people who encourage you along the way.