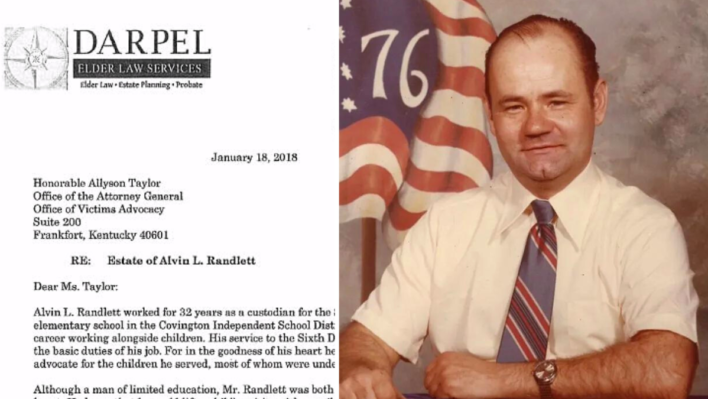 Beloved School Janitor Passes Away – Shocks Everyone by Giving Away His $175,000 Life Savings

The man continued his life’s work of helping others even from beyond the grave.
By Sophie Babinski    November 11, 2022

The man continued his life’s work of helping others even from beyond the grave.

When most of us make up our wills, we plan to leave whatever we have left to our families. Usually, bequests or donations to charities are at the bottom of the list of concerns once retirement rolls around.

However, one Kentucky janitor saw things differently. He scrimped and saved his whole life in order to make an amazing impact after his death.

How One School Janitor Was Fondly Remembered

Alvin Randlett worked as a janitor in the same school district for over 30 years before he retired. He himself had only attended school until the 5th grade, but that didn’t stop him from working hard and making an impact each day.

Alvin never married or had children, so his priority was the school where he worked and the children who attended it. He was always there for all of the children who passed through the halls, offering a listening ear and a shoulder to cry on.

RELATED: He Started As An Illiterate Janitor – Now, He’s One Of The World’s Most Successful Latino Execs

He was a staple of the school who often volunteered as a field trip chaperone, and was someone who was always remembered fondly. He rarely missed a day’s work — he retired with more than 300 days of unused sick leave.

Alvin retired and was given a pension from the school district, but he only spent what he absolutely needed. He walked everywhere instead of purchasing a car, and used the bare necessities to get by. When he passed away 15 years later, what he left behind was shocking.

How a School Janitor Left Behind a Legacy

Alvin had bequeathed his life savings — a whopping $175,000 to a local fund for abused children. The Kentucky Child Victims’ Trust Fund was the organization he chose to leave everything to. The administration and local leaders were amazed when they saw what Alvin had done.

RELATED: Students Call Deaf Janitor into Classroom – What They Did Next Made Him Break Down in Tears

Alvin wasn’t a rich man, nor did he have a fancy job or wealthy parents. He was just an average, hardworking man who made it his mission in life to be a friend to all who crossed his path. He took that one step further, making it his mission in death as well.

“It was Alvin’s last wish to help with those who can’t help themselves,” his friend Jeff Siska said.

Alvin’s story proves that you don’t need much to make an amazing impact. Of course, not everyone can donate their life savings to help abused children. However, everyone can consider their legacy and ask themselves what they can do to help as many people as possible.