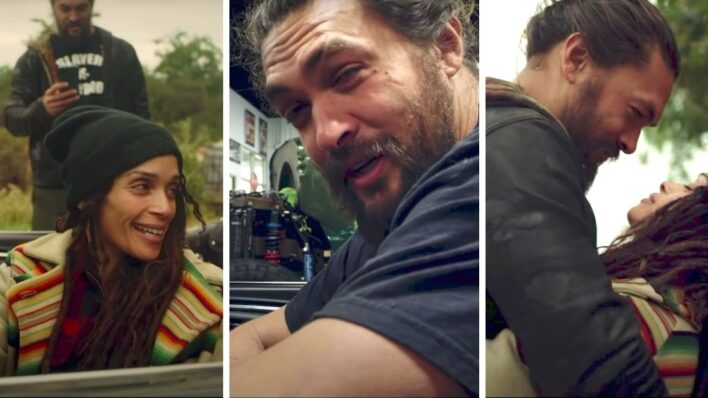 Jason Momoa and Lisa Bonet have been married for 14 years but romance is certainly not dead, as he proves with an incredibly thoughtful surprise.
By Kawter    August 6, 2020

Jason Momoa and Lisa Bonet have been married for 14 years but romance is certainly not dead, as he proves with an incredibly thoughtful surprise.

Most of us are already aware of how adorable Jason Momoa and Lisa Bonet are together. The two have been inseparable, despite the unconventional circumstances of their romance.

First, Lisa is 11 years older than Jason. To him, she always was his childhood crush. “Ever since I was eight years old and I saw her on TV [on The Cosby Show], I was like, ‘Mommy, I want that one!'” Jason admitted.

So when he first met her in 2005, after a chance encounter at a club. Jason could barely contain his excitement.

I turned around to my friend and was like, [fangirl shriek]. I had f***ing fireworks going off inside, man.

Since then, the two haven’t left each other’s side. “We have been together from the day that we met,” Lisa told Porter magazine. Their relationship defied the odds of an age difference, her already having a daughter (Zoe Kravitz) with incredibly cool ex, Lenny Kravitz and the pressures of Hollywood.

But Jason once again proved that marriage and romance are more than just butterflies and passion when he surprised his wife with an incredibly thoughtful gift.

Jason Momoa’s surprise was 14 years in the making

Lisa bought her first car ever, a 1965 Ford Mustang, 14 years ago. Over the years, the old vehicle had gone decrepit but Jason, being the attentive husband that he is, was not going to let go of it.

“This is a big dream come true because this was my wife’s first car,” Jason declares in the video.

The little documentary details Jason’s secret plan to restore the old Mustang that was so dear to his wife. At the end, he made the big reveal with their two daughters featured in the video.

To be in this passenger seat with my wife here and surprise her and our babies in the back, riding in her first car when she was 17. I’m excited to see her face.

Watch this Goalcast video on how Jason Momoa and Lenny Kravitz managed loving the same woman:

Jason keeps the romance alive, even after all these years

Jason and Lisa have been together for 14 years. For any couple, this is a long time. It might also mean the death of movie-like romance and the beginning of a routine-bound relationship. Well, not necessarily as Jason promptly shows us.

“I know we can’t relive a memory, but maybe we can rebuild one,” Jason said in the video.

When Lisa saw her old car in its new sleek and shiny form, she was overcome with her surprise. “It’s beautiful … Holy cow!” she exclaimed.

Romance is in your hands

Jason Momoa will make many women envious with his candid expressions of love and celebrations of Lisa Bonet. The truth is, he leaves us all with an important lesson about making efforts.

Not all of us are in a position to restore our significant other’s 1965 Mustang but there are many ways to keep the romance alive–some that don’t involve money at all. Whether it is by figuring out your partner’s love language or simply complimenting them, these small gestures can go a long way in keeping the flame alive.