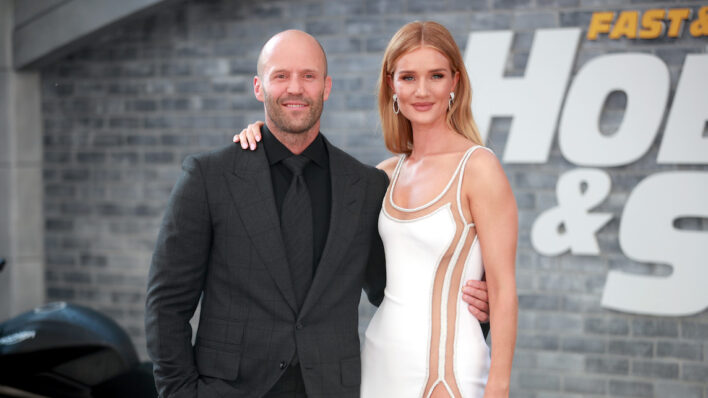 Despite a 20-year age difference, Jason Statham and Rosie Huntington-Whiteley’s relationship proves that connections really are about the right chemistry.
By Barbara Pavone    July 17, 2020

Despite a 20-year age difference, Jason Statham and Rosie Huntington-Whiteley’s relationship proves that connections really are about the right chemistry.

Getting engaged, then married, then starting a family is the traditional order that many relationships follow, but Rosie Huntington-Whiteley and Jason Statham aren’t your traditional couple.

First, there’s the age difference: Huntington-Whiteley is 20 years younger than her beau. Then, there’s the fact that they’ve been together for over a decade, have been engaged for five years (and counting), have already welcomed their first child and they’re still not married. Nor are they in a rush to walk down the aisle.

Here’s what we can learn from Rosie Huntington-Whiteley and Jason Statham’s unconventional romance:

Their age difference is no obstacle at all

It has long been reported that Rosie Huntington-Whiteley and Jason Statham met on the 2010 set of Transformers: Dark of the Moon, but that’s just not true! Statham never joined the franchise, although he was considered as a replacement for Shia LaBeouf because of his relationship with Transformers: Dark of the Moon’s leading lady. As one source explained about the casting process for 2014’s Transformers: Age of Extinction, “One of the stars being mentioned is Rosie’s boyfriend Jason Staham […] his relationship with Rosie would be an added bonus in marketing the movie.”

So how did the pair actually meet? The former Victoria’s Secret model revealed the truth about their initial encounter while answering fan questions on Instagram in April 2020. “We met at a party in London in 2009,” she wrote, adding that “it was instant chemistry.” As for the fact that they’re two decades apart in age, they never even considered it. “It’s never been an issue! Age is nothing but a number!” she proclaimed.

They laugh every day

Before she began dating Jason Statham, Rosie Huntington-Whiteley was linked to French actor Olivier Martinez and Canadian actor Ty Wood — and Statham is nothing like her exes.

Speaking with Self in 2015, the model-turned-actress gushed about their easygoing chemistry.

We’re best mates. He makes me laugh every day. I almost feel like I never had a proper boyfriend before!

She also appeared to reveal what made Statham stand out from the pack when she told the mag, “When you’re renowned for your physicality, people — not just men — tend to think you couldn’t possibly be smart or funny. I like to think I have a little bit of personality,” she noted, adding, “But I can be shy and nervous to expose myself.” Obviously, Jason saw that personality and gave her the confidence to show her true colors.

Although the pair has been incredibly secretive about their romance, what we do know is that their relationship appears to be built on a great deal of respect, admiration, and fun. As Jason once joked with Esquire, they don’t take themselves too seriously and having a good laugh is always a top priority. “We get drunk and float around the swimming pool,” he quipped.

A self-professed workaholic, Rosie admitted to ELLE UK in 2012 that she was starting to look beyond work and think about family. “I always see myself working, but definitely being a mum will be a big part of me,” she told the magazine. Getting candid, she continued, “Look, I think my career is very self-indulgent. It’s all about me. I’m not a doctor, I’m not looking after people, I’m not saving children,” she reasoned.

I’m in the entertainment business […] so it is very self-involved. I think there is naturally a point where you think, ‘I don’t care about myself as No. 1 anymore. I want to care about other things.’

That point didn’t come for a few more years and not until the pair hit another milestone first. In January 2016, they got engaged and Rosie debuted her massive five-carat engagement ring on the Golden Globes red carpet where the $350,000 piece of bling stole the show.

But rather than racing down the aisle, they decided to do things their way and fast-forward to having kids. In February 2017, the British beauty shared an Instagram photo of herself on a beach showing off a baby bump, which she captioned, “Very happy to share that Jason and I are expecting!!” That June, she posted another sweet snap, this one of her newborn son holding her finger, and wrote, “Our little man arrived! Jack Oscar Statham – 8.8lbs on Saturday June 24th.”

Marriage isn’t the be-all and end-all

Rosie and Jason are in no hurry to get married and there’s a very good reason for that. Speaking with Self, Huntington-Whiteley said, “For any couple that’s been together for a certain amount of time, there’s a massive amount of pressure to get married. I totally believe in marriage, but being in a happy relationship is much more important to me,” she noted.

When Extra! asked for an update on their nuptials in 2018, Huntington-Whiteley made it clear that, even after two years of engagement, she was cool with waiting. “I think the time will come. We’ve been so focused on our work for so long, and Jack came along,” she explained.

We definitely talk about it, we’re looking forward to that time, it’s also not a huge priority for us, we’re so happy.

She then hinted at extending their engagement, saying, “I think it will be fun to do it when the baby’s grown up a bit and he can be involved in the wedding.”

Parenthood has made their bond even stronger

In addition to focusing on building (and maintaining) a healthy, happy relationship — rather than on planning a wedding — the couple’s other top priority is their son. As Rosie told Extra!, even though Jason always plays a tough guy on the big screen, when he’s home, he shares a different side of himself.

Revealing what a fabulous father her partner is, she gushed, “He is very happy to get up at 5 in the morning and do daddy duty and let me sleep an extra hour. He’s very hands-on,” she continued.

He’s a brilliant dad. I am very lucky, he’s a great partner.

In April 2020, she offered another small glimpse into their home life, telling fans on Instagram that little Jack “has a proper English accent and he does have the same booming loud voice as Jason. The pair of them are sooo noisy!” she joked.

Like with all things in life, a one-size-fits-all approach doesn’t exist for relationships. What works for one couple might not work for another and no one should ever feel forced to second-guess what’s right for them simply because it’s not the ‘norm’.

Rosie Huntington-Whiteley and Jason Statham have embraced this fact and, from day one, they’ve done things their way. Whether it’s their substantial age difference or the fact that they’ve gotten engaged without placing a whole lot of importance on marriage, they’ve crafted their own formula for relationship success — and it’s working.