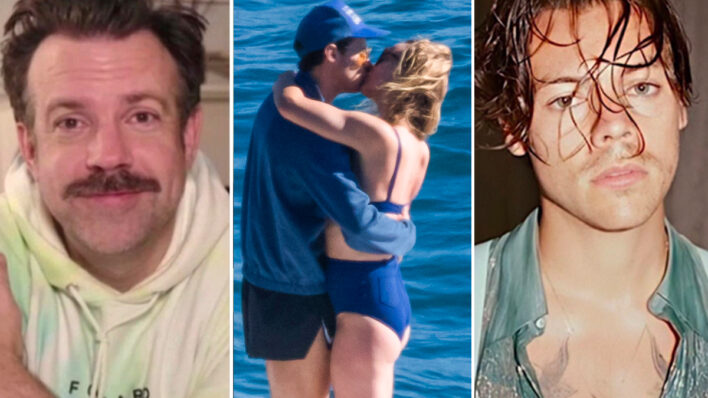 Jason Sudeikis May Have Lost Olivia Wilde To Harry Styles, But He’s Not Given Up yet

Life has a way of knocking the brightest, most vivacious personalities to the ground. You’re full of optimism one minute
By Shaoni Das    July 15, 2021

Life has a way of knocking the brightest, most vivacious personalities to the ground. You’re full of optimism one minute

Life has a way of knocking the brightest, most vivacious personalities to the ground. You’re full of optimism one minute and wallowing through the depths of despair the next. It’s precisely the kind of quandary Jason Sudeikis experienced over the last year as his world came crashing down.

Though he’s receiving heaps of praise for his titular role in Apple TV+ flagship comedy Ted Lasso, it’s Jason’s personal life that has become a target among the recent celebrity gossip mill.

The outsized level of attention has a lot to do with an odd love triangle that involves himself, his ex and baby mama, Olivia Wilde, and the hottest, most desired male popstar on the planet, Harry Styles.

There’s nothing whatsoever unusual about a Hollywood breakup, but the mysterious circumstances under which Jason and Olivia dissolved their eight-year engagement begets more than a few questions. There is also the matter of the complicated timeline surrounding Harry and Olivia’s dalliance.

Here’s what Jason had to say about the split and the toll it’s been taking on him:

Jason is still struggling to find “clarity” about the breakup, though he does take “some responsibility” for it

Right off the bat, there’s uncertainty as to how or when the couple decided to call it quits. PEOPLE magazine initially reported that Jason and Olivia had mutually agreed to separate at the beginning of 2020 and were keen on co-parenting their two children, Otis and Daisy, with love and dedication.

However, an insider allegedly close to Jason Sudeikis told PEOPLE that the press has bungled up the timeline and that Jason and Olivia were romantically involved with each other as recently as October 2020. This matters because Olivia started filming her movie Don’t Worry Darling just a month prior, which is where she became acquainted with Harry Styles.

The insider’s view is Olivia’s on-set chemistry with Harry precipitated the breakup in question and left fiancé Jason feeling “heartbroken” and shocked.

Obviously, there’s no way to confirm the exact chronology of events that led to the dissolution of their relationship, but Jason does confirm to GQ that the couple parted ways in November 2020. Olivia and Harry were photographed holding hands at a wedding just two months later in January 2021, at which point a source told Entertainment Tonight that their romance, in fact, did blossom on the set of Don’t Worry Darling.

It’s futile to keep abreast of the continual speculation about Harry, Olivia, and the genesis of their relationship. Both are fiercely private about their lives, and rightfully so. However, what’s intriguing is that Jason doesn’t mince his words when describing his fraught partnership with Olivia. He makes no secret of his utter disbelief at this drastic development.

The former SNL star was just as baffled by Olivia’s moves as the rest of the world and is still struggling to gain “clarity.” He can’t begin to imagine how it all went so wrong; he hopes the answers come to him in due course. “I’ll have a better understanding of why in a year,” he said, adding that he’ll develop a firm grasp on the situation over time, perhaps in two years, five years, or even longer than that.

He’s patiently waiting for the moment the mess is in his rearview mirror, when it goes from being “a book of [his] life to becoming a chapter to a paragraph to a line to a word to a doodle.” The wound is still raw, and he’s still coming to grips with the strange circumstances, but eventually, the pain will pass, or at the very least, become manageable. The best he can do at the moment is to look forward to a brighter, more liberating future.

That’s an experience that you either learn from or make excuses about. You take some responsibility for it, hold yourself accountable for what you do, but then also endeavor to learn something beyond the obvious from it.

Jason Sudeikis characterized the separation as his “rock bottom,” saying that your mental wellbeing ultimately hinges on how well you’re able to collect yourself amidst the agony and the distress. “You can become 412 bones or you can land like an Avenger. I personally have chosen to land like an Avenger,” he said.

He’s not too positive about what this actually entails, but he is proud of himself for emerging through the tense state of affairs with dignity and resilience. It doesn’t mean the ramifications are done with and that he’s no longer going to encounter any obstacles going forward with Olivia or his own self-esteem. It just means that he’s been able to deal with the rude awakening with aplomb and that he didn’t crumble when it would have been entirely justified for him to do so.

Furthermore, Jason is aware that he has two young children with Olivia and that personal grievances have to be put aside if they’re to provide stable and attentive care to their little ones. That’s why he goes above and beyond to pay respect to Olivia if the moment calls for it. For example, during his acceptance speech at The Critics’ Choice Awards, he gave a sweet shoutout to his ex-partner and thanked her for helping him realize his vision of Ted Lasso and urging him to adapt it into a television show. “I want to thank my kids, Otis and Daisy,” he said. “I want to thank their mom Olivia, who had the initial idea to do this as a TV show, saying, ‘You and Brendan [Hunt] and Joe [Kelly] like doing that so much. You should do it as a movie or TV show.’ She was right,” he said.

Olivia, for her part, congratulated her ex-fiancé and his co-producers on Twitter and even poked fun at Jason’s hoodie, which generated some buzz across social media during the award ceremony. Despite what the media would have you believe, the pair seem to be getting along fine – at least, judging by their public appearances.

Give yourself the time and space to process big moments

Though there’s still plenty to be unearthed regarding the Jason-Olivia-Harry conundrum, one thing is clear as crystal: you can never expect the most life-changing occurrences. They’ll happen in the blink of an eye, and you’ll be pressured to think, act, and move fast. Instead of jumping to conclusions and forcing yourself to deal with something before you’re ready, you need to extend to yourself the time and space you need to process the jarring turn of events.

What’s notable about Jason’s approach is that he understands he doesn’t have the answers at the moment but that doesn’t mean he’s clueless or naive; he’s just bothered with trying to get to the bottom of what happened. He’s perfectly content to be moving at his own pace and absorbing the change at his own pace. It’s a critical lesson: we don’t necessarily have to break down our pain into digestible little pieces to help us overcome it more effectively. As long as we’re patient with our emotions, and thoughtful with our actions, we’ll find a way out.