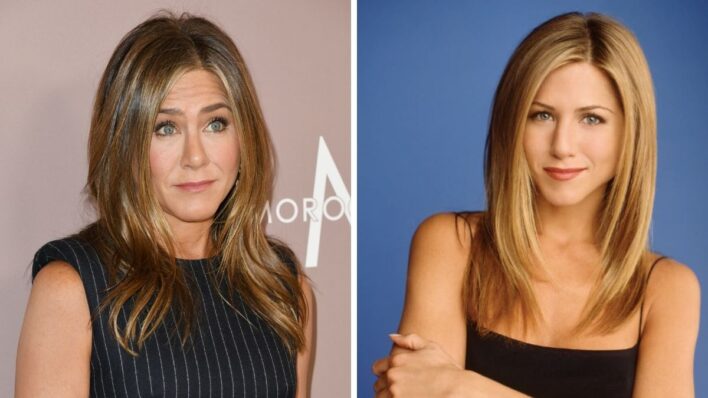 Jennifer Aniston breaks myths about aging naturally and tells society that saying someone looks “good for their age” is not a compliment.
By Shaoni Das    August 2, 2021

Jennifer Aniston breaks myths about aging naturally and tells society that saying someone looks “good for their age” is not a compliment.

It’s fair to say Jennifer Aniston is one of the most stunning women on this planet. In fact, she’s seamlessly held this unofficial position for nearly thirty years. Whether you’re 14, 32, or 48, you’ve likely had a crush on Rachel from Friends at some point in your life.

If not a crush, perhaps an unexplainable fondness. You admire her ability to stand tall in the face of adversity. You admire her illustrious body of work, the advocacy work that is second to none, a charismatic, kind personality that shines through in each and every appearance.

You admire how she’s been able to preserve her beauty over the years, her skincare regimen, her commitment to meeting exceedingly high body standards, her tendency to prioritize self-care over material possessions.

There’s a lot to like about Jennifer Aniston, and it’s all too tempting to sing praises of how she’s been able to defy aging by still being as gorgeous as in her early twenties. Yet, The Morning Show lead will be the first to tell you it’s not always empowering to compliment someone, especially a woman, for “looking good for her age.” Here’s a deeper look at her reasoning:

If Jennifer feels “physically incredible,” why should anyone comment on her age?

In a revealing interview with InStyle, Jennifer opens up, among a variety of subjects, about the perception of beauty and how it applies to older women. The actress turned 50 a few years back but isn’t remotely bothered with the connotations that accompany the milestone. Everyone expects you to be married with children by the time you hit fifty, and if you somehow manage to fail the mission and end up both single and childless, as is the case with Jennifer, you’re going to be portrayed as a bitter spinster who repulses all humanity.

Things aren’t shutting down in any way. I feel physically incredible. So it’s weird that it’s all of a sudden getting telegraphed in a way that’s like, ‘You look amazing for your age.’ I think we need to establish some etiquette around that dialogue and verbiage.

Only, the issue with Jennifer is that she doesn’t quite fit the traditional look of a spinster; she isn’t ugly, she doesn’t look ‘old,’ and she isn’t cruel or rancourous or petulant in the least bit, so audiences don’t have a way of classifying her within her age range. This lack of knowledge approaching someone her age leads to well-intentioned but misguided comments like, “you look so good for your age!” While there’s nothing wrong with these remarks per se, it does expose our mindset around older women and their desirability, or lack thereof.

Jennifer doesn’t feel any different in her fifties than she did in her thirties or forties. It doesn’t mean she hasn’t evolved or discovered new dimensions to herself, but those realizations were catalyzed by experience, not her biological clock. “Fifty was the first time I thought, ‘Well, that number,’ she said. “I don’t know what it is because I don’t feel any different.”

What we have to understand as a society is that people don’t just stop being attractive at some arbitrary number. It doesn’t make sense that you’re rosy, youthful, and desirable one second and suddenly ugly the next. Virtually nothing changes between when you’re twenty-nine and when you’re thirty. The biological changes that take place do so gradually and without some major announcement. Moreover, why does a woman have to stop being beautiful if she’s in her forties or fifties as if it’s some kind of an anomaly for women in this age group to still look appealing? If beauty is truly in the eye of the beholder, isn’t it unfair to identify some older women as gorgeous and others as average? If you’re gushing over someone for looking fabulous for her age, what does it mean for her peers who you dismiss as simply serviceable?

I’m at the age where I’m more interested than ever in my health, and my life is thriving, but according to society, this is when I should be going out to pasture. No, no, no.

This distinction goes beyond gender. In this day and age, with advancements in healthcare, skincare, fitness, and just simple lifestyle innovations, it’s not unusual for people to retain their aesthetic allure well into their fifties. You don’t have to be a multi-million dollar celebrity to ‘look good for your age; anyone can do so, and they shouldn’t be treated as some sort of miracle. If you’re a bombshell in your fifties, you shouldn’t be held on a pedestal as if you’re beating the odds; those odds shouldn’t exist in the first place. You don’t look good for your age; you just look good, period.

Jennifer firmly believes in the notion that aging is a gift, and we have to embrace it however we can. Our body will go through its changes, but the most crucial developments will be in your mind. As long as you prioritize self-care and feel good about yourself, you don’t have to feel the slightest bit of anxiety for what the years will bring. There’s plenty of gas left in the tank, and it’s up to you where you want to take the car. “It’s just sort of been a theme in my life: to enjoy the age I am and not look at aging as a negative, but as the privilege that it is,” she said. “We all age!”

Aging is natural but irrelevant to your beauty

At the end of the day, beauty is entirely subjective, and everyone is going to age in some way or the other. You don’t know how it will manifest, and you don’t have an idea of the precise year it’s going to transpire. Perhaps it starts with mild back pain, or maybe you realize your energy is depleting. However, these symptoms don’t have to signal aging at all and can be attributed to a wide number of other phenomena. That’s the crux: we need to stop connecting beauty with age as if one is completely determined by the other. Secondly, if your body is running smoothly and you still feel fit and attractive, why should society impose some inconsistent parameters on you? Thirdly, just because you’re past the reproductive age (which itself is an unreliable metric, mind you), it doesn’t mean you’re heading to your old age. You’re quite a ways off old age, and that’s a fact.

Associating aging with unattractiveness is akin to associating youth with beauty. There will always be people on both sides who don’t fit the mold, but instead of comparing them with their peers, we can remove those distinctions altogether and focus on self-belief as the guiding principle. As long as you’re working on yourself and feel comfortable in your skin, it doesn’t matter what it says on your ID.