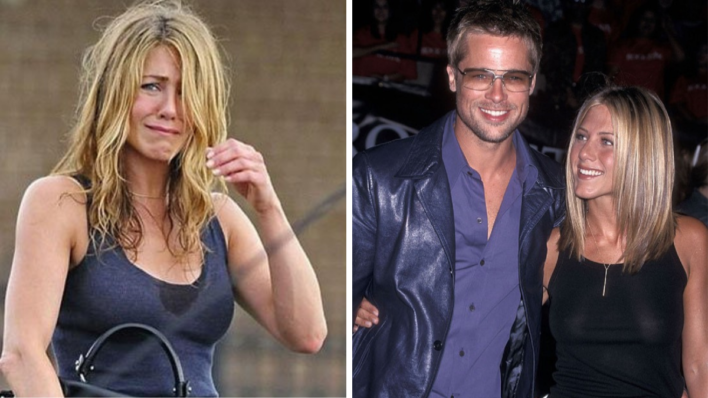 Jennifer Aniston has a few regrets when it comes to her marriage to Brad Pitt— and she doesn’t shy away from revealing it all.
By Shaoni Das    June 23, 2021

Jennifer Aniston has a few regrets when it comes to her marriage to Brad Pitt— and she doesn’t shy away from revealing it all.

Where did it go wrong for Jennifer Aniston and Brad Pitt?

It’s a question that will continue to puzzle the masses for a long time. For better or for worse, the end of Brad and Jennifer’s marriage marked a turning point for celebrity culture. Prior to this development, we’d think about famous figures only when we were watching them on-screen, or if we happened to read about them in a magazine or a newspaper. They were but an inconsequential part of our lives that we hardly paid heed to.

Upon the dissolution of Jennifer and Brad’s beloved, high-profile marriage, however, the public collectively realized that somewhere along the way, they’d build a parasocial bond with the couple. They were already familiar with Jennifer as Rachel from Friends, and Brad had strikingly established himself as one of the most charismatic, talented actors of his generation. It was perhaps inevitable that their following would evolve into a beast of its own, a personal obsession that we’re still unpacking fifteen years later.

There is a whole array of factors that triggered their scandalous split, some of which will never see the light of day, and Jennifer Aniston isn’t hesitant about expressing a few regrets. They don’t tell us the whole story, but they do shed a little light on what occurred between the two.

Jennifer reveals her one regret

In a startlingly candid interview with Vanity Fair just a year after separating from Brad, Jennifer laid out everything she could find within herself to share. A number of heartbreaking truths were disclosed, yet the actress made sure not to disparage her ex-husband and exacerbate an already toxic situation. The wounds were still fresh, so one would have exactly blamed her if she decided to go the other route and tear into Brad.

Jennifer revealed that she’d been just as blown over by the divorce announcement as the rest of us. “The world was shocked, and I was shocked,” she told the outlet. Yet, she and Brad worked together to create and deliver a statement that represented a calm, cordial front. It was necessary for Jennifer that they “exited this relationship as beautifully as [they] entered it.”

Jen experienced a whirlpool of emotions in the days, weeks, and months that followed. Brad jumped into a flagrant, oft-photographed romance with Angelina. Jennifer, on the other hand, underwent the usual stages of grief and struggled to process how her world shattered in a matter of months. She was confused, she was lonely, she was angry, but she persevered to focus on herself and wholeheartedly embrace this journey of self-discovery.

Through this trying time, Jennifer experienced a number of profound realizations that up until then had been embedded deep within her heart. Speaking about her regrets about the marriage, Jennifer said that she wished she didn’t “give over so much” of herself to the relationship, that she’d been able to hold her ground in certain circumstances and prioritize her own wellbeing.

I wouldn’t give over so much of myself, which I did at times. It was that thing about being a nurturer; I love taking care of people, and I definitely put his needs before mine sometimes.

The Morning Show actress revealed that she couldn’t help but lose herself in the process. If you don’t have a solid grasp of your identity and find yourself bending to someone else’s will frequently, it’s all too easy, unfortunately, to get wrapped up in the other person’s whims and forget about your passions and dreams. This is not dissimilar to what had occurred with Brad, and perhaps it may have played a part in alienating the two individuals from one another.

She still feels “lucky” to have been married to him, and doesn’t “regret any of it”

Jennifer added among her list of regrets that she would have taken more time off work, gone on vacations, gotten away from the hustle and bustle, and given herself the time and space to truly unwind. In their five-year marriage, either she or Brad were always working, leaving them with hardly any time to embark on getaways together.

This regret stands in stark contrast to the assumption, and later, vilification of Jennifer’s character as a ‘career-obsessed’ woman who didn’t want kids. In the Vanity Fair article itself, Jennifer said this was nothing but a misogynistic attempt to debase her and portray her as the bad guy in the fiasco.

For all the hurt that was inflicted on her through the separation and divorce proceedings, Jennifer made good on her promise to keep Brad in her heart forever. It’s incredibly resilient of her to keep the bad vibes away from the interview and direct her attention to the brilliant memories that she’d made with Brad over the course of seven years. She said she felt “lucky” to have had a lovely marriage with him for the most part, and that she’s always going to value the moments they shared and the lessons he’d taught her.

I will love him for the rest of my life. He’s a fantastic man. I don’t regret any of it, and I’m not going to beat myself up about it. We spent seven very intense years together; we taught each other a lot—about healing, and about fun.

It’s no surprise that Brad and Jen are still friendly with each other and aren’t shy to be publicly affectionate — despite the tabloids posting outrageous theories and rumors in response. We don’t know if they have closure, but one could hazard a guess that they are at a good place and have established a good friendship, which is more than what you can ask for in such an absurd state of affairs.

More importantly, Jennifer’s discoveries about self-love still hold true today. How common is it to start letting your natural identity fade as you’re trying to appease your partner and adapt to their needs and desires? It’s an “insidious” process, as Jennifer puts it. One moment you’re self-assured about your identity and what it means to you; the next moment, you’re breaking your back trying to define yourself in the most simple terms.

I feel like I’ve broken the pattern now. I’ll never let myself down like that again. I feel like my sense of self is being strengthened because of it.

Never lose sight of who you are

It’s normal, if not encouraged, to prioritize the other person when you made a serious commitment to someone. You want to make them smile, you want to compromise to make their day just a little better, you’re willing to neglect your wants to suit theirs, but there’s a fine line between giving yourself over to the other person entirely and simply adjusting to their style.

There’s value in holding back, in being more reserved with your partner. It’s not that you shouldn’t reveal all your cards; it’s about protecting your heart and putting yourself first. You’re the only one who has to live with the good, the bad, the ugly. If you can hold your head high and tell yourself that you deserve to be at the top of your priority list, you won’t be left feeling like a fool should something go wrong. Compromises come with the territory, but the most sustainable relationships are powered by a whole lot of self-love.