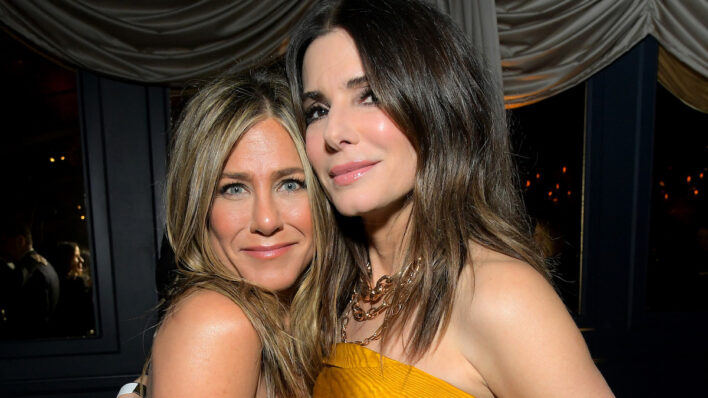 Jennifer Aniston and Sandra Bullock’s long-lasting friendship proves the power of female solidarity in the world of Hollywood.
By Shaoni Das    February 24, 2020

Jennifer Aniston and Sandra Bullock’s long-lasting friendship proves the power of female solidarity in the world of Hollywood.

Jennifer Aniston and Sandra Bullock are two actresses who have gone through their long, illustrious careers marked as beloved American Sweethearts, who have had their most personal moments splattered all over the tabloid magazines, struggled and survived through a harsh, judgmental Hollywood climate that often tends to neglect older women.

Years later, they are finally reconnecting and speaking on their friendship that has lasted through the choppy waters, the career highs-and-lows, the publicized romances and the even-more-publicized divorces and betrayals, and they are not afraid of getting real.

Both the actresses had their breakout in the 90s, with Aniston achieving global fame as Rachel Green in blockbuster hit Friends and Bullock gaining worldwide recognition as a gorgeous, competent action hero in Speed. Yet it’s their immeasurable celebrity that paved the way for the media to constantly document their personal lives as if the world depended on it.

Now both in their 50s, Aniston and Bullock try to make sense of a culture that tried to knock them down, but one that they continue to dominate anyway. Both the women are vastly different, from each other and from other actresses, yet how did their friendship endure over the years in such impressive fashion?

Coping under a vicious media

We are all quite familiar with how Jennifer Aniston’s divorce from Brad Pitt led to her being portrayed as a sad, jilted woman who’d forever be hurting for love — when that couldn’t be further from the truth.

Sandra Bullock also faced the brunt of this relentless media when it was found that her former husband Jesse James had had extramarital affairs with several women; the scandal broke soon after Bullock’s Best Actress win at the Oscars. Once again, the media began to frame the narrative of a heartbroken woman deceived by a bad-boy husband who thought she wasn’t good enough.

Both Aniston and Bullock have achieved more stardom and accolades in their career than most other actresses could ever imagine, yet it was their personal struggles that became the focus of media attention and public fascination.

Private matters that should be dealt with in solitude or with close family and friends became fodder for the media. Getting betrayed by people you love is already awful but having to go through that grieving process in the public eye is even worse.

You can either be angry or be a martyr, or you can say, ‘You’ve got lemons? Let’s make lemonade.’

They mended their hearts and moved on…

Life doesn’t stop at heartbreak, especially when there is so much to live for.

Jennifer Aniston went on to find love again with Justin Theroux–even if the relationship did not last–and her dramatic work in recent years has garnered her unparalleled acclaim from across the board. Bullock too pressed on by exploring the joy of motherhood through her two children, her career shining as bright as ever.

An unconventional perception of motherhood

Bullock decided to become a single mother at the age of 45 by adopting her son Louie, following that up with the adoption of her daughter Laila at the age of 51. As difficult as the adoption process was, she doesn’t like to refer to them as her adopted children–motherhood is not dependent on biological relations. It can merely exist and prosper through the power of love and affection.

My family is blended and diverse, nutty, and loving and understanding.

Jennifer Aniston has never pursued motherhood herself but that doesn’t mean her life is lacking in any way whatsoever. Many falsely assumed that Aniston’s decision not to have kids was the primary reason why Brad Pitt left her to be with Angelina Jolie, but she is not letting those presumptions affect her perception of motherhood.

She is not ruling out the possibility of becoming a mother but she has also emphasized that her pursuit of motherhood is not due to her feeling like she is “incomplete in some way”, as the media would have us believe.

A different approach for everyone

There is no one-size-fits-all in terms of being a parent. As women, we are often told that motherhood is the ultimate form of contentment, the only thing that could make us feel whole. Yet Bullock and Aniston’s lives both represent motherhood as a unique experience for everyone, and for some, it may not bring any additional prosperity at all.

These women are breaking the mold when it comes to motherhood, and they serve as an inspiration to all the young women who doubt whether they can subvert tradition to achieve completeness in their lives.

A Hollywood female friendship that survived the test of time

In their interview, both Bullock and Aniston address how the culture of women supporting one another is indeed new. The #MeToo movement has had a lot to do with facilitating a positive environment in which women can come together, show their appreciation for each other and lift each other up.

Bullock expresses her admiration for Aniston in how she goes through life as though she is not “afraid to lose anything”, and how she generously shares her wealth of friendships to make everyone feel included and cherished. Aniston mirrors that same love for Bullock, and the pair do not shy away from showering their love for each other.

They even bond over having dated the same man, Tate Donovan, in the nineties.  They agree that he had a type: a talented, funny, kind, introspective, generous woman. Instead of creating feelings of awkwardness or animosity, this memory becomes an opportunity for both Aniston and Bullock to convey their love for each other.

For an industry that doesn’t always cater to middle-aged women, these women continue to dominate the award seasons, the box office, and the attention of the masses. It may have taken time for such a progressive atmosphere but it is now working its wonders. The MeToo movement has played a part in that as well.

We create that. Our industry has expanded its horizons in that way, and I think it’s because women have stood up and said, ‘We’re mad as hell, and we’re not going to take it anymore.’

Jennifer and Sandra prove that age is nothing but a number

Your age should never limit you to achieving your dreams or going after what you want. Many women begin feeling powerless after a certain age but both Bullock and Aniston demonstrate through their actions and words that they will not withstand a culture that devalues them on the basis of age.

Life is riddled with all sorts of challenges, but there is always time for you to reflect and push forward. No matter what people are saying about you, you can be at peace knowing that no one knows you better than yourself. These women did not let the media narrative define their life; they progressed at their own pace, and despite the obstacles laid in their path, they found true happiness.