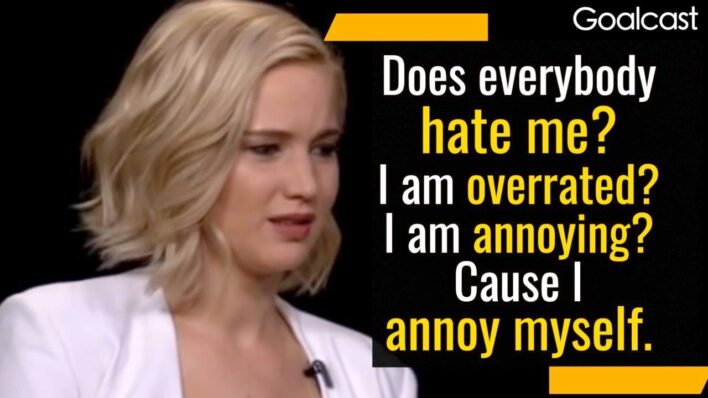 Jennifer Lawrence: Why Does Everybody Hate me?

Jennifer Lawrence speaks about how ridiculous fame is and how her career took a successful route because she listened to her intuition.

Jennifer Lawrence: Why does everybody hate me? Am I overrated? Am I annoying? Because I annoy myself. You don’t … No one should be listened to as much as I’m listened to. Nobody should be … I see pictures of me everywhere and hear everything that I’m saying. I say one thing to one reporter and it’s like bah, bah. How does this not drive people nuts? I was never happy in school. I had social anxiety, not social anxiety. I was just always exhausted. I was always looking out the window just thinking about freedom. I always felt herded like in a herd. I think back to that … It was a bizarre time being a 14-year-old trying to tell my parents I’m moving from Kentucky to New York, and I know that it’s going to work out. It really did. I’ve achieved more than I ever thought was possible. When I first started acting and I was on a sitcom, I was happy to be on a sitcom for the rest of my life. I didn’t really have these aspirations. This is so much bigger than anything I could have imagined. I’ve always had a very strong sense of once I want it, get it done. I don’t really … It won’t leave my mind until it’s just done, so I end up doing things very quickly and aggressively. My entire career is dictated by a feeling.

Interviewer: You trust your gut.

Interviewer: When you’re wrong, what do you think happened?

Jennifer Lawrence: Everything’s fine. It happens. In business, there’s ups and downs. I would much rather blame myself though than go I shouldn’t have listened to that person. At least I go, well, you learned. But also having in mind, this is important for growing up, is having in mind who you want to be. I remember thinking that and not being able to do it and then slowly developing and growing and feeling very sure about this thing and hearing no a million times and going, no, it’s there. I’m going to make it happen.