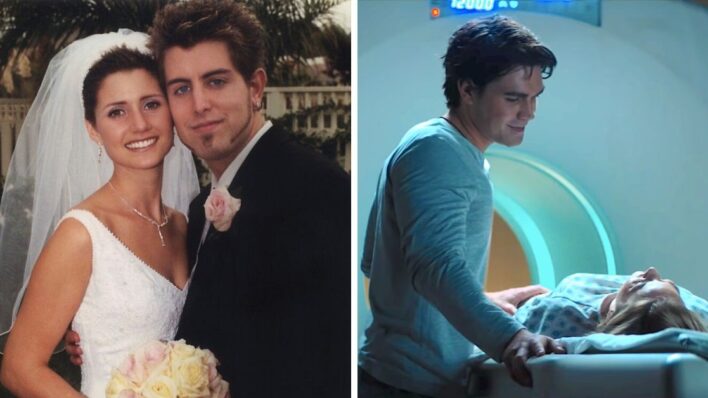 Jeremy Camp’s relationship with his first wife is an incredible tale of love and loss. Having inspired the movie “I Still Believe,” named after the song he wrote on his experience, Jeremy’s decision to marry his wife despite her terminal illness is a testament to the power of love.
By Shaoni Das    March 16, 2020

Jeremy Camp’s relationship with his first wife is an incredible tale of love and loss. Having inspired the movie “I Still Believe,” named after the song he wrote on his experience, Jeremy’s decision to marry his wife despite her terminal illness is a testament to the power of love.

We’ve all heard of sweeping epic love stories that survive the test of time, the ones that are able to overcome all the obstacles in their path and achieve a state of eternal bliss no matter what. It melts our hearts and makes us believe in the true power of love — the kind of love that conquers all and leaves everyone cowering under its glory.

But Christian rock singer Jeremy Camp pursued a romance that was in many ways doomed from the beginning. By all intents and purposes, his relationship with Melissa Henning followed the same motions of a traditional courtship: boy meets girl, boy likes girl, girl likes boy, and then boy and girl get married.

Yet, looming under that seemingly sweet love story was the threat of a life-changing incident, something that ultimately ended up wrecking their relationship for good. But not for the reasons you think.

Such is the nature of the human experience that we can’t help but seek love in all its forms. Jeremy knew very well that his love for Melissa could only bring him pain and suffering, that their romance could very well end in tragedy, but he persisted anyway.

So what is it about love that forces us to make the drastic decisions? And how do we move on when those choices end up hurting us?

He knew she was dying but he followed his heart anyway

Their love story began during a church session in San Diego, as revealed in CBN. Jeremy was signing in front of the entire mass, and Melissa was immersed in his sound, her hands raised up high. Thus developed a connection between the two that was based as much on romance it was on faith. Jeremy fell for her right away, professing ‘I love you’ very early on, even though she didn’t exactly return those feelings right away.

A few months later, she called him up and gave him shocking news that was going to shift his world off its axis: she had ovarian cancer. A reveal like that has the potential to break off a budding relationship right there and then. Jeremy could have easily walked away from her in order to save himself from getting hurt, from entangling himself into a relationship that was possibly heading towards unbearable hardship.

It brought me down to go to the hospital and when I saw her face she was smiling. I saw that heart, that’s what drew me to her, her love for the Lord.

But Jeremy chose to marry her anyway. He said that they both just knew they had to do it, that they had no other choice, that their love was too powerful to stop them. During their honeymoon, Melissa started having stomach pains and upon running tests, they learnt from her doctor that her cancer was back and there was nothing else they could do on their end.

But Melissa didn’t see this as devastation; instead, she had more of a positive outlook on this matter than anyone could ever expect. She told Jeremy that if her death would allow one person to accept Jesus Christ as their Lord and Savior, then it would all be worth it. In her final days, the pair would sing and worship, continuing to build their bond with God, and not fret about the unfortunate circumstances.

Life and death are intertwined at each and every step of the way; where there is life, there is death. It’s true that each and every individual has their own reaction to tackling impending death, but what unites us is our ability to make the most of our lives, especially when we know it’s coming to end.

Melissa’s passions lied in her faith, and in her final days, she chose to work on that faith as best as she could. As her partner in life, all Jeremy could do was support her. He chose to prioritize love, regardless of how much it could end up wounding him.

He found solace in music and in faith

Jeremy became a widower at just 24 — before he could really get his career in order. One of his first songs, ‘I Still Believe’ dealt with Melissa’s illness and the emotional difficulties that accompanied it.

According to this interview on Belief Net, Jeremy wrote this song while he was still grieving over Melissa’s death. He said that God basically told him to pick his guitar up, and even though he was at odds with that in the beginning, he finally found it in himself to pick his guitar up and start singing. The words poured out of him and he couldn’t stop them.

Making music became part of his healing process, and he learnt that sharing his feelings not only brought him closer to Melissa’s memory but brought him close to God as well. Thus ensued his extensive and illustrious career in the Christian music scene, where Jeremy managed to produce over ten albums and 32 number-one hits in the charts. Moreover, he was finally able to embrace his relationship with God wholeheartedly.

He learned not to blame his religion or God for taking Melissa away from his life. At first, he felt frustrated, he felt angry, he felt confused about why he bothered to read the bibles and sing the praise of God. But every time he felt down, his faith told him to have trust.

I had my battles. I had my times of just being upset and God would show me, ‘Hey, I’m right here, I’ll walk you through this and it doesn’t make sense now but just trust me.’ That’s where faith come in – trust.

One of Melissa’s dying wishes was that Jeremy finds someone else after her death. Two years after her death, Jeremy married fellow singer Adrienne Liesching. They now have three kids: two daughters and a son. Camp finally moved on, but it certainly wasn’t easy.

The endless expressions of love

Sometimes love can be that all-consuming natural force that pushes us on to every decision we make. For Jeremy Camp, his love for Melissa led him to take the plunge, even when they knew that things could end in calamity for both of them. But because they took this plunge and because they opened up their hearts to each other, Jeremy was able to find hope, faith and trust when he needed it the most.

Our love can exist and thrive in so many different expressions and forms. Jeremy’s love for God is what allows him to accept and practice other expressions of love, such as that of music and of family. His attitude towards life tells us that no decision built on love can be a regretful one, because love only paves the way for more love. As long as we hold trust, things will work out.