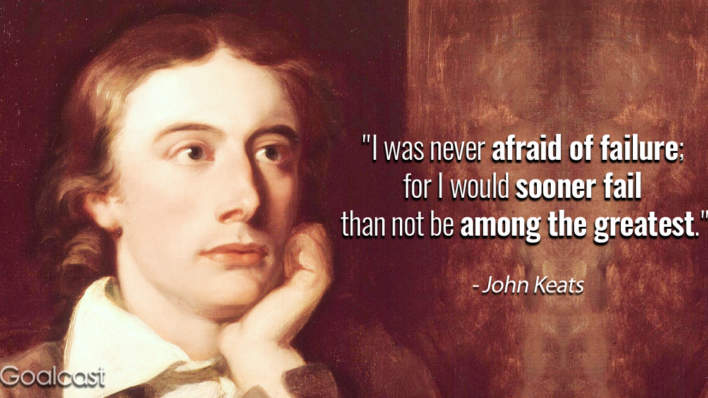 25 John Keats Quotes That Will Appeal to All Your Senses

John Keats was an English poet whose poems are marked by vivid imagery. Here are 25 John Keats quotes that will appeal to all your senses.
By Flavia Medrut    November 21, 2019

John Keats was an English poet whose poems are marked by vivid imagery. Here are 25 John Keats quotes that will appeal to all your senses.

John Keats (October 31, 1795 – February 23, 1821) was an English Romantic poet whose writings are considered to be among the finest in the English language.

Keats lost both his parents at an early age. He was eight years old when his father was killed after being trampled by a horse.

The poet’s mother remarried, but as soon as her second marriage fell apart, she left her children in the care of their grandmother. Sadly, when she came back, she did not have enough time to reconnect with her children as she soon died of tuberculosis.

Keats quickly learned about suffering and loss and used his understanding of human condition to craft his own writing style. Still, his poems also focus on the beauty of life, emotions and sensuality.

He perfected poetry as his words appeal richly to the senses. Keats’ metaphorical references bring his world vividly into his reader’s imagination.

Keats died at the young age of 25, and while he never became famous during his lifetime, he left behind a legacy that inspired many other great poets.

Here are 25 John Keats quotes that will appeal to all your senses:

I am certain of nothing but the holiness of the heart’s affections, and the truth of imagination.

Do you not see how necessary a world of pains and troubles is to school an intelligence and make it a soul?

Nothing ever becomes real ’til it is experienced – even a proverb is no proverb until your life has illustrated it.

Poetry should be great and unobtrusive, a thing which enters into one’s soul, and does not startle it or amaze it with itself, but with its subject.

I must choose between despair and energy – I choose the latter.

O for a life of Sensations rather than of Thoughts!

Beauty is truth, truth beauty,—that is all ye know on earth, and all ye need to know.

I almost wish we were butterflies and liv’d but three summer days – three such days with you I could fill with more delight than fifty common years could ever contain.

I was never afraid of failure; for I would sooner fail than not be among the greatest.

Touch has a memory. O say, love, say, What can I do to kill it and be free?

You are always new. The last of your kisses was even the sweetest; the last smile the brightest; the last movement the gracefullest.

Two souls with but a single thought. Two hearts that beat as one!

The only means of strengthening one’s intellect is to make up one’s mind about nothing — to let the mind be a thoroughfare for all thoughts.

The excellence of every art is its intensity.

A thing of beauty is a joy forever; Its loveliness increases; It will never pass into nothingness.

I have two luxuries to brood over in my walks, your loveliness and the hour of my death. O that I could have possession of them both in the same minute.

Scenery is fine — but human nature is finer.

I have had a thousand kisses, for which with my whole soul I thank love – but if you should deny me the thousand and first – ‘t would put me to the proof how great a misery I could live through.

I love you the more in that I believe you had liked me for my own sake and for nothing else.

Pleasure is oft a visitant; but pain clings cruelly to us.

I wish to believe in immortality – I wish to live with you forever.

Can death be sleep, when life is but a dream, and scenes of bliss pass as a phantom by?

The poetry of the earth is never dead.

Time, that aged nurse, rocked me to patience.

If I should die, I have left no immortal work behind me — nothing to make my friends proud of my memory — but I have loved the principle of beauty in all things, and if I had had time I would have made myself remembered.