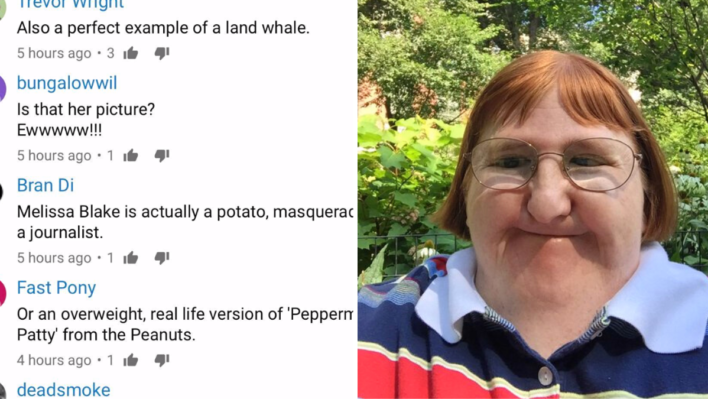 Disabled Journalist Gets Horrible Comments on Her Appearance – Instead of Staying Silent, She Decides to Expose Them

With the invention of the internet came cyberbullying, where people use the protection of their computer screen to spread hate to others.

One blogger and journalist has a lot of experience dealing with online haters, and she has something to say to them.

The Horrible Comments One Journalist Received

Melissa Blake writes about a large range of topics, from sex and relationships to her own disability. The latter has exposed her to trolls on a regular basis, so she has learned how to best deal with them

“The dig at my journalism credentials doesn’t bother me, but you know what?? I’m getting so tired of people (read: men) thinking it’s OK to insult a woman’s appearance,” Blake said. “Yes, my disability makes me look different. Trust me, I know that. I’ve known that my entire life.”

When one of her columns was discussed on a right-wing YouTube channel, Blake knew what the comments were going to look like.

“Also a perfect example of a land whale,” commented one person.

“Melissa Blake is actually a potato, masquerading as a journalist,” another person wrote.

Blake didn’t let the trolls stay hidden; she brought them out into the light. She shared screenshots of the hateful comments on twitter.

“Reminder that this is what it’s like to be a disabled woman writer on the internet AND #ThisIsAmerica in 2019,” Blake wrote.

How One Journalist Responded to Haters Online

Along with three selfies, Blake posted the following:

“During the last round of trollgate,” she tweeted, “people said that I should be banned from posting photos of myself because I’m too ugly. So I’d just like to commemorate the occasion with these three selfies.”

“Anyone who calls you ugly has a stain on their soul. Shame on them,” commented another.

From the comfort of their computer screen, cyberbullies can forget how their hurtful comments actually are.

Blake explained how the trolling has affected her own self-esteem.

RELATED: Exhausted Mom Is Sick of Being Judged – What She Does Next Puts the Haters in Their Place

“And people wonder why I’ve struggled so much with self-acceptance when it comes to how I look and our society’s notion of what ‘beautiful’ is,” she continued.

“It’s because of comments like these — comments that dismiss me and deem me unworthy. This is just one more example of the type of ableism that people with disabilities face every day and it’s something I’m constantly trying to change.”

Though it’s taken some time, and the haters haven’t helped, Blake now accepts herself for who she is. Not only does she know that she is beautiful, she also knows that her appearance is not the only, or most important, thing that makes her the strong, amazing woman she is.