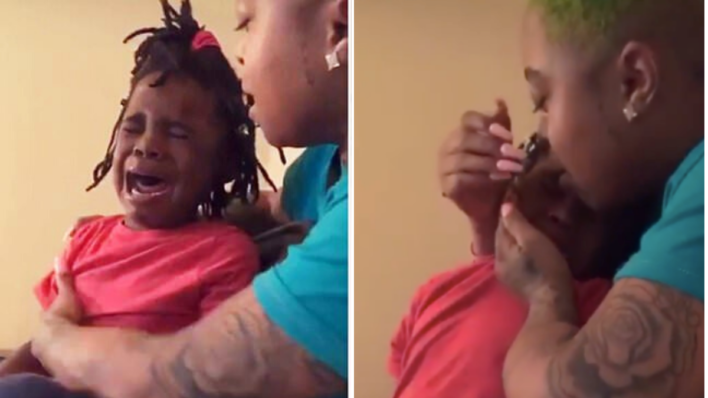 With three words, one little girl brought the world to tears and inspired a tidal wave of love you would have to see to believe.
By Bryan Liquor    December 14, 2021

With three words, one little girl brought the world to tears and inspired a tidal wave of love you would have to see to believe.

When she caught a glimpse of her reflection in the mirror, 4-year-old Ariyonna immediately stopped getting her haircut and uttered three heartbreaking words.

However, Redmond didn’t let up.

No, you not gonna cry. You are a beautiful little girl. You are the prettiest girl in class. Boom! Tell ’em straight up.

And while things might seem rough, Redmond tells her the future is bright.

“Your teacher mean to you?”

“So guess what, when you become the teacher, you don’t be mean. You be the nice teacher,” Redmond added.

While doing her hair she had alllll the energy in the world then out of nowhere she stares at herself and gets soooo discouraged 😢 it broke my heart into pieces because she has the GREATEST energy and the most beautiful smile and heart.

“I just think when kids go to school they learn and pick up so much different things that they don’t know the definition but they know the feeling,” she continued.

The video quickly went viral, gathering over 750,000 likes and thousands of comments including some friends in high places.

Actress Jada Pinkett-Smith was moved and posted on Instagram

Oscar-nominated “Hair Love” director Matthew Cherry called on #ArtTwitter to reflect Ariyonna’s true beauty, and they came out in droves.

Even former First Lady Michelle Obama chimed in with some love

“Ariyonna, you are gorgeous,” Obama wrote on Instagram. “In a world that sometimes tries to say otherwise, I want to tell you- and every other beautiful, intelligent, brave black girl- just how precious you are.”

Our children are beautiful

Well, the love shower brought rainbows. In a follow-up, the video shows a beaming Ariyonna blowing kisses to everyone who shared the love.

To Redmond, she’s not only beautiful but a force.

She’s a blessing, she’s opened doors for a lot of the young girls like her today and are afraid to speak.

Culture, classroom, history- who knows where Ariyonna got the idea that she’s anything but beautiful. One thing’s for sure: In those moments, we have to be there to lift children up.

After all, we’re shaping our future.

True beauty comes from within
“Beauty is not in the face; beauty is the light in the heart.” – Kahlil Gibran
Tags
Share
← Prev Post Next Post →