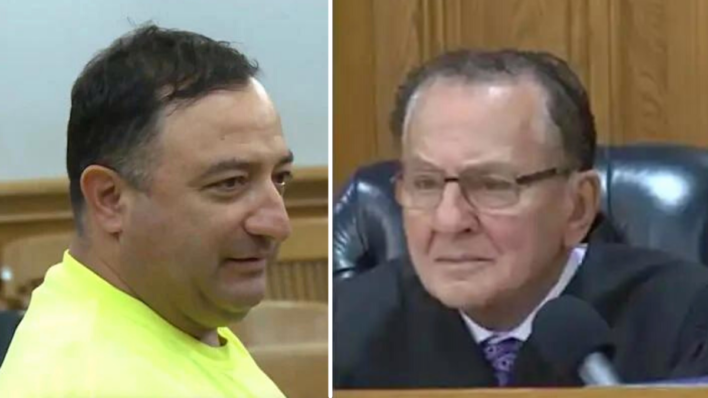 Years Later, one man returned to Judge Frank Caprio’s court and took the opportunity to thank him for changing his life.
By Amber Dowling    May 5, 2022

Years Later, one man returned to Judge Frank Caprio’s court and took the opportunity to thank him for changing his life.

There are all kinds of reasons a person may wind up in court. But in Providence, R.I., a good person in need of a break would be lucky to find themselves in Frank Caprio’s courtroom.

The kind octogenarian judge has been deemed “the nicest judge in the world” for his rulings, in which he leads with his heart. But the gavel turned around on the judge when he had an unexpected repeat customer one day.

Back in 2018, Jose Jimenez was summoned to appear in the Municipal Court because of two parking violations. One of the tickets Jimenez had paid but apparently, there was a late fee he had missed. And the other one he didn’t know anything about. In a video uploaded to the Caught in Providence Facebook page, Jimenez explained he was hoping to waive the late fee.

I want to tell you about my life.

“I have a landscaping truck business and I’ve got two trucks… I’m so tired. I do roofs, sides, decks, patios, and the guys have a party, my tenants…” Jimenez says. “I went inside and I ate dinner then I went to rest and I forgot the truck on the street… I’m here to know if I can only pay the $20.”

It seems like Judge Caprio felt the man was being sincere because he cleared him of the penalties and told him he was free to go. But the man didn’t leave. Instead, he stood up a little straighter and looked at the judge. “I want to tell you about my life,” he said.

The Mysterious Connection One Man Shared With Judge Caprio

Jimenez then explained to the judge how he wanted to thank him, because back when he was 18 years old, he stood in front of the judge under very different circumstances. In fact, Jimenez recalled how, at the time, he was in court nearly every month.

From there, Jimenez turned his life around. He got his truck driver’s license and eventually he opened his own successful landscaping company. He had the money to pay for the ticket he knew about and could have avoided going to court altogether, but he wanted to thank Caprio in person.

I want young people to think that everybody can change.

“I just had to remind him and congratulate him for all he has done and continues to do for young adolescents,” Jimenez later told The Providence Journal. “Now I want people to see, and I want young people to think, that everybody can change.”

Why Judge Frank Caprio Decided to Lead With His Heart

Throughout the entire story, Judge Caprio was smiling and actively listening. When Jimenez finished, he had even more wisdom to impart. “I wanna tell you something,” he said. “You were down, and it’s not a crime to get knocked down in life. But it’s a sin not to get up,” he continued.

It’s not a crime to get knocked down in life. But it’s a sin not to get up.

“You suffered being down and out and you were having problems. I don’t remember it. But now that you brought it to my attention, it’s something I try to do with people,” he further explained. “Sometimes people say I’m too lenient. I’m not trying to be lenient, I’m trying to help people. Trying to bring out something in them. I probably recognized something in you, that spark.”

Judge Caprio then congratulated Jimenez on turning his life around and asked him to come up so he could shake his hand. Then they hugged and even took a picture.

Judge Caprio was clearly born to do what he does, but he’s also a shining example of how compassion and understanding can go a long way towards helping somebody turn their life around. At the end of the day, we’re all human, and we all go through things in life.

Rather than looking at the law in black and white, Judge Caprio tries to understand the stories behind the actions and, as he said, bring out the best in people. His actions are a reminder that even those of us who aren’t official judges could always use a little more compassion in our lives. Rather than assume to know what a person is going through, it’s always nice to ask.

That could mean practicing your active listening skills with a grumpy friend or a family member who seems to be taking their day out on you, asking a kid struggling at school what’s up, or even reaching out to a stranger who looks like they’re having a bad day. Sometimes lending an ear and just being there to listen- without judgment- can be exactly what a person needs.

And who knows- maybe one day that’s exactly what you’ll need from someone too.