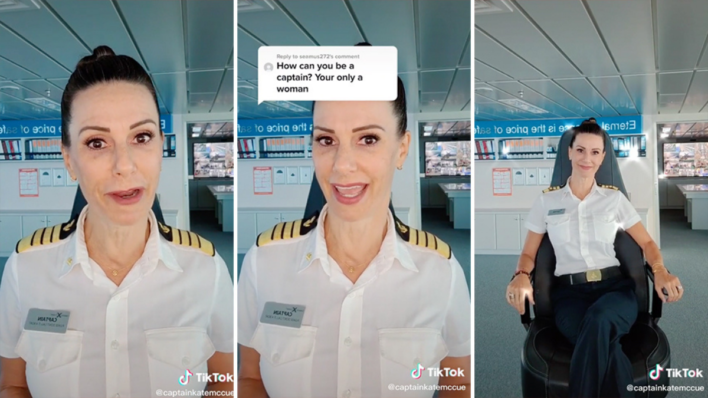 She gave him a lesson in grammar…and ignorance.

She’s damn good at what she does

In 2015, Kate McCue became America’s first cruise ship captain of a major vessel when she was given the keys to Celebrity Summit, according to People. Five years later, she moved up to captain an even bigger vessel, Celebrity Edge, where she presides over 1,400 staff.

Yet despite her accomplishments and how she’s clearly excellent at her job, she continues to get trolled on social media.

“How can you be a captain? Your [sic] only a woman,” wrote one commenter on her TikTok page.

Usually, McCue ignores these types of comments — she has better things to do. But not this time.

In a now-viral video, McCue shut down the troll, but not in the way you’d expect.

“Normally, when I’m scrolling through comments and I see something like this, I totally ignore it and move on with my life,” said McCue, speaking from her ship, Celebrity Edge. “But I think it’s about high time that I address this, because it’s 2020, and in this day and age, I’m shocked …”

After a dramatic pause, she continued, “…that someone still doesn’t know the difference between you’re and your.”

McCue goes on to give a lesson in grammar…and sexism.

“So just a quick reference: You’re — as in ‘you are’ — like, ‘you are sexist.’ Your is something possessive, it belongs to you, like ‘your ignorance,'” McCue added. “But don’t worry. I’m here for you. If you need any more clarification, you can find me here, in my captain’s chair.”

The video has received more than 3 million plays on TikTok and half a million on Instagram.

One commenter on Instagram wrote: “This is how strong and smart women do! Awesome Kate!”

Another said, “Wow…. She addressed it like a Boss… lovely.”

What McCue did was truly admirable. Instead of letting this troll get to her, she had some fun with it and made valuable points at the same time. What a great role model to show young and old what a badass woman really looks like.