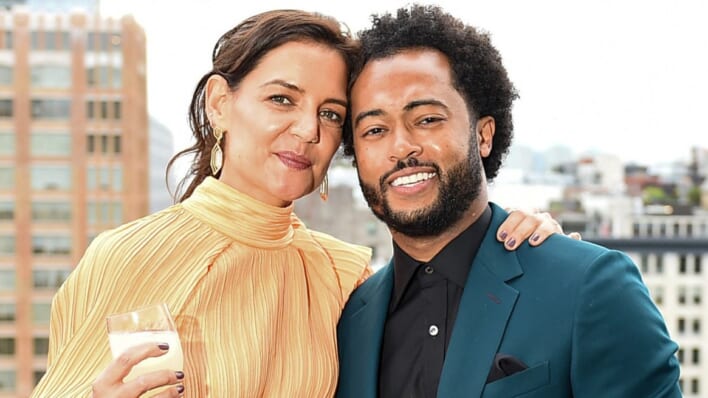 Who Is Katie Holmes’ Boyfriend? What You Need to Know About Bobby Wooten

Katie Holmes has had heart eyes these days for her new flame, Bobby Wooten III. Many will be surprised to know who Wooten is and how successful he really is.
By Bina Lee Deir    October 18, 2022

Katie Holmes has had heart eyes these days for her new flame, Bobby Wooten III. Many will be surprised to know who Wooten is and how successful he really is.

Katie Holmes is no stranger to being in the news and tabloids for people she is dating. After having been in several high-profile relationships, she has become a spotlight for celebrity dating news, and her recent flame is no different.

RELATED: What Katie Holmes Teaches Us About Getting Older and Not Taking No For An Answer

This past May, Katie Holmes and her boyfriend appeared at a gala together, sparking yet again, more dating news for the actress. The two appeared to be very happy together and it was apparent that they were very much in love. In fact, many say that Holmes seems happier than ever, which is nice to see.

As photos of the pair on the red carpet at the event made immediate headlines, fans of Holmes posed the question, who is this new flame that has her visibly swooning?

Bobby Wooten was born in New Jersey, but raised in Chicago, Illinois. He grew up playing various instruments, but he focused mainly on the keyboard and bass guitar. He was self taught, which is very impressive to say the least as his first music lesson wasn’t until he got to college.

It’s really no surprise that Wooten would be naturally gifted in music as his grandfather started a choral ensemble as a young man. He also talked about his talented dad in an interview with Bass Magazine, “My dad was doing pop music and studio work, and playing keyboards in Marcus Miller’s band.”

RELATED: How to Discover Your Natural Strengths and Talents

As he got older, Wooten and his friends would start a band where they would do covers of Blink-182, sparking his passion for music. He describes this experience as being the event that his “love for bass went deep.”

This influence and inspiration from the band would eventually lead him to teaching himself songs that ranged from Stevie Wonder to Red Hot Chili Peppers. His gift was distinct and apparent to many as he eventually went on to college to study music, attaining a degree in jazz. His love for music and in particular, the bass guitar, brought him to a point in his life where making music and playing instruments would become his life purpose.

One of Bobby’s most notable accomplishments is having been part of the original cast of the Broadway show of David Byrne’s award-winning “American Utopia.” He sang, danced, and played bass guitar while taking center stage. Being a big fan and supporter of David Byrne, it was a huge honor for him to be part of the cast on the show.

RELATED: 30 Music Quotes That Celebrate The Magic of Sound And Rhythm

Wooten’s success didn’t stop here. His producing and composing skills have come with a lot of requests from famous singers, groups, and even brands. He has produced and recorded songs for some big names including Jennifer Lopez, Mac Miller, Machine Gun Kelly, Rick Ross, Nike, and even Google. This past year, Wooten also played the bass at Coachella for Carly Rae Jepsen.

And if it wasn’t enough that he was a successful musician, he also taught music production at the NYU Clive Davis Institute and is currently an instructor at New York University’s Tisch School of the Arts. He is truly a multi-talented individual!

Although Wooten has worked with some big names and is well-known in the music composing industry, Wooten has also become quite an activist. After being profoundly impacted by George Floyd getting killed, he created an Instagram page titled “America Learn Your History.” If you go on the page, you will see short snippets of Wooten sharing history on people of color, more specifically his background which is black and Puerto Rican.

The niche of the page is to educate people on the history and misinformation of his culture while capping the videos at two minutes. The videos are very informative, and enlightening, and serves to correct a lot of politically incorrect sayings which are commonly used in society. He further pushes the envelope by calling out mandates, political views, and misinformation from historical events.

Wooten only continues to prove that not only is he incredibly gifted when it comes to music, but he has an inspiring spirit that is willing to fight for equality and to make a difference. He is putting action behind his words, which makes him that much more respectable as a human being.

The two originally met through mutual friends and hit it off rather quickly. There was quite a bit of buzz around the couple earlier this year, but they made it publicly official at the Moth Ball’s 25th Anniversary Gala this past May. While on the red carpet, Wooten even told US Weekly that he’s “happy to have [Katie] here as my date.”

Since then, it seems as though the two have had a whirlwind of a romance and it is evident that Holmes is very happy, which her fans are thrilled about. It has been several months now of the two attending weddings, meeting respective family members, and supporting each other through various events. Recently, Katie has even commented on Wooten’s Instagram posts with red hearts galore.

RELATED: As A Single Mother, Angelina Jolie Defies The Odd Of Her Broken Family

Holmes has continually affirmed throughout her chapter in life as a mother that Suri is her priority and it’s evident that she values being present and protecting her daughter. Although this is the case, it has been revealed that Bobby has met Suri and the two get along great.

With Wooten’s successful career and passion for life, it’s no wonder that Holmes has fallen for him and is visibly thriving in her romance. The two seem like a match made in heaven and there is no doubt that the two will be in it for the long haul!

Who is Adele’s Boyfriend? Here Are the Interesting Things to Know About Rich Paul