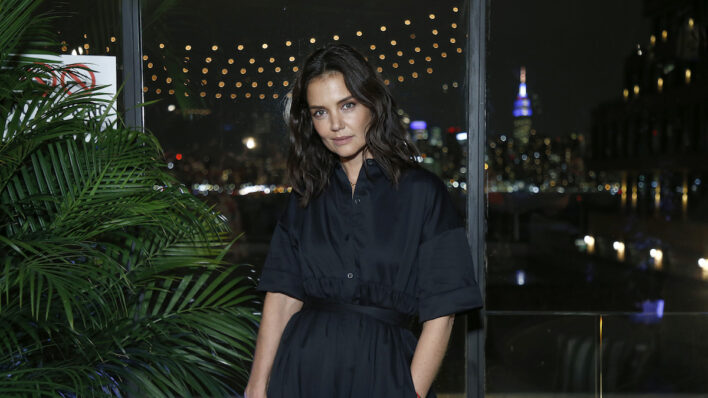 The Dawson’s Creek alum sheds light on what happens when you aren’t the fresh-faced ingenue in the industry anymore…
By Shaoni Das    December 13, 2021

Katie Holmes is realizing what it means to be on the ‘wrong’ side of forty.

Since her breakout as Joey Potter on the late-nineties teen drama Dawson’s Creek, Katie Holmes is someone who’s always been prized for her youth and beauty. A picture of femininity, naiveté, and delicacy, she’d been everyone’s crush back in the day.

It helps that when you’re a cute fledgling actress trying to maneuver your way through the industry, a lot of doors open for you without any prompting in the first place. People are enraptured by your presence, they focus on your promise and not your weaknesses, and they’re willing to give you far more leeway than they might extend towards an older actress. Even with her rise to widespread fame as Tom Cruise’s wife and later ex-wife, Katie had always been positioned sympathetically, as though she was out of his league and had been roped into his craziness.

However, at nearly 43, Katie Holmes understands the pains and the advantages of getting older.

In an InStyle interview, the actress opened up about how much her career has changed over the years and what she is discovering about herself as a single, working mom in her forties.

“Over time there’s a transition. I have my own confidence now,” she said. Speaking about her beginnings, she revealed how she’d been so shy and green when starting out that she would say yes to everyone and everything. “As a young actress, you just want to get the job. You want to be liked. You want a good take and think, ‘Was I good enough?.”

The Ohio native didn’t have the inner strength to stand up for herself and hold her ground against anyone. Thrust into the spotlight at age twenty, she had to carry the weight of a thousand impossible expectations on her shoulders, not knowing whose advice to take or how to make decisions as they pertained to her career. She just wanted to do a good job and impress her peers and bosses; she didn’t really take account of how these moments would affect her mental state.

Over time there’s a transition. I have my own confidence now. I’m not looking for somebody else to say, ‘Good job.’

The entertainment arena itself wasn’t the same, either; nowadays, Katie said, actresses have more than one avenue to express themselves and have a direct line of communication with their supporters. With the proliferation of social media, you can’t really remain “mysterious” as you could in the nineties, said Katie. “There was much less attention in the ’90s than there is now,” she said. It was a time when you were primarily known through your work, and so it was paramount to meet the right people and do as you’re told; it was the only way to advance your career.

Today, Katie is far more assured about her skill set and position, and moreover, has a profound, singular vision about each project. She doesn’t need validation from anyone else about having done a “good job” — the satisfaction comes from within. Each endeavor is a  “collaborative” process, where she’s trying to work with her colleagues to nail the scene. It’s no longer about trying to make your mark on someone; it’s about executing everything to the tee.

That being said, there are undeniable struggles associated with getting older, not the least of which is not getting what you want simply because you’re a little girl and you’re used to people taking pity on you. Katie grew up as the “baby of five,” and as such, she was treated like a princess throughout her adolescence and well into her twenties. Upon turning forty, she realized she couldn’t get away with the same behavior. “I told a friend of mine, ‘You know what’s so upsetting about the 40s? My old tricks don’t work,’” she said. She woke up one day and realized the dynamic had transformed, not just within her family but in her workplaces too.

And, of course, there is the physical metamorphosis as well — when you can see your skin losing its shine, your body losing its flexibility, and your weight becoming just a tad unstable. In a setting defined by its obsession with the young and the beautiful, you could very well see your professional opportunities dwindling post-forty. Things may be changing, yes, but it’s still nearly impossible to maintain self-love when the world is bent on bringing you down. “It’s very odd. I used to get away with no makeup,” said Katie, adding how it was actually more in vogue to not wear makeup at the time.

Katie said she often feels “superficial” for having to go through make-up and skincare routines. If that’s not a scathing indictment of the harsh standards imposed upon older women in Hollywood, we don’t know what is. No one should have to rely on cosmetics to get through the day unless they want to. They shouldn’t be pressured to increase their usage of any specific product purely because of age. In an ideal world, Katie wouldn’t have to feel superficial or phony at all; instead, she would feel like it’s her absolute choice and nothing else.

At the end of the day, Katie does embrace being older and wiser. The life experience, including that of a twenty-year career, a controversial marriage, and motherhood, have allowed her to gain learnings she wouldn’t have in her twenties, and, as a result, she is able to move forward with a new and improved lease on life. “People say you don’t really know yourself until you’re 40. I’m 41. I have seen things,” she said. She’s well-attuned to her emotions and knows her “insights are worthy.” There is very little self-doubt remaining, so much so that she’d much rather listen to herself than “defer to someone else.”

I have experienced things. I know what I’m talking about, and I know that my feelings and my insights are worthy. I’m going to listen to myself instead of deferring to someone else. That’s a big step as a human. It takes time.

Value yourself as you age

Katie Holmes’ trajectory is a fascinating example of what happens when you stop relying on your youth to get you through life’s most strenuous tests. You can’t help but turn to other areas of your life, and that’s what’s going to be more rewarding if you think about it. Youth fades, and so do its perks. The knowledge that comes from being with yourself for forty-odd years is immense: you know yourself inside out, you know what makes you happy, you know what makes you sad, and you more or less know what’s important or not important in your journey. Aging does come with its challenges, but the gift of wisdom is irreplaceable.

Loving yourself is an inside job
“In order to love who you are, you cannot hate the experiences that shaped you.” — Andrea Dykstra
Tags
Share
← Prev Post Next Post →