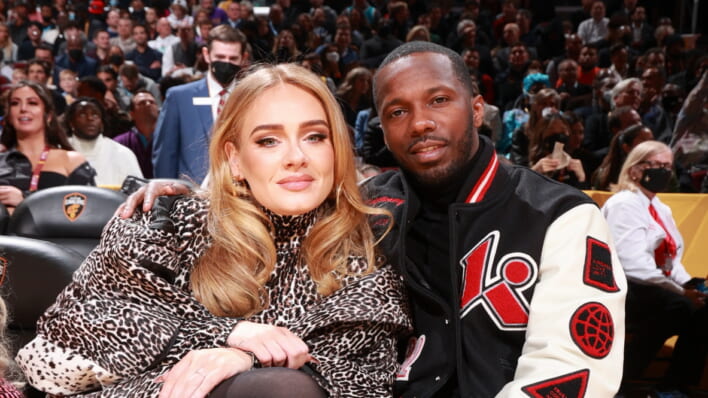 Who is Adele’s Boyfriend? Here Are the Interesting Things to Know About Rich Paul

Adele’s fairly new relationship with Rich Paul is surprisingly private with a few exceptions, but there is plenty to learn about her new flame.
By Jeff Liddell    October 8, 2022

Adele’s fairly new relationship with Rich Paul is surprisingly private with a few exceptions, but there is plenty to learn about her new flame.

The English singer and songwriter Adele is one of the world’s best-selling artists and shows no signs of slowing down. Even her relationships are moving at a quick pace. Until last year, Adele was in a relationship with charity entrepreneur Simon Konecki. They share a child togetgher and were dating for over a decade before marrying in 2018. Adele has since divorced Konecki, and as of 2021, is now in a relationship with Rich Paul.

While he is nowhere near as famous as his partner, whose impact on British culture was big enough to be crowned with her own nickname, “The Queen of Hearts”, Rich Paul is a successful part of his own industry, similar to Chris Brown’s mother, Joyce Hawkins. Paul not only found a way to make a living before he and Adele even started dating, he also managed to develop several connections to prolific athletes with fame comparable to that of Adele herself.

Who is Rich Paul? Childhood and Family

Rich Paul is an American sports agent and was born on December 16, 1981, in Cleveland, Ohio. Despite his current status in the sports world and his relationship with a superstar like Adele, Paul’s life story is certainly one of rags to riches. When he was a child, he lived in a one-bedroom apartment above his father’s store, and had to witness battles related to drug abuse thanks to his mother’s own issues with addiction. As a result, he was forced to live with his grandmother, as well as a great-uncle.

According to an interview with the New Yorker, Paul describes his younger self as “never really angry, but I was definitely protective…” He recalled seeing other kids with healthier relationships with their parents, and naturally, he craved the same. It didn’t help that Paul also lost his father to intestinal cancer when he was attending college, which led to him dropping out of school.

RELATED: The Best Love Quotes for Him and Her

LeBron James, whose more than familiar name would remain forever relevant in Paul’s life as an adult, characterized Paul as having developed his skills in the business world due to the rougher parts of his childhood. Those were primarily due to the demographic of basketball players he represented resembling the youths of both Paul and James’ own childhoods. Additionally, as an adult, Paul had three children before dating Adele, and with his accumulated wealth, he likely tries to make up for the lost time with his own parents.

It is all too common to see executives and other businesspeople commodify the arts and entertainment world without any regards for the people that actually provide the experience for the audience. While Paul is certainly on the business side of things in the sports world, he joined the industry out of passion for the games he played in his childhood.

Although he originally aspired to be a professional athlete, presumably in either basketball or football, the sports he played as a kid, his “shorter” stature for professional sports standards made him rewire his career and venture into business. Despite, his love for sports remained and eventually paid off.

LeBron James is one of the most well-known basketball players of all time and is often compared to Michael Jordan by fans who debate the best player in the history of the sport. James happens to be close with Rich Paul. The two met in 2002, and James was impressed by Paul’s authentic Warren Moon jersey, which led to the two men giving each other’s contact information.

As for Klutch Sports Group itself, the company’s history started began once the 2003 NBA draft ended, when James offered Paul to join his inner circle alongside other childhood friends such as Maverick Carter. After leaving basketball executive Leon Rose in 2012, Paul brought James with him to start a new sports agency that would become Klutch. Klutch, which represents LeBron James, proved itself to be wildly successful, primarily thanks to attorney Mark Termini, who negotiated $1.4 billion in NBA contracts for the clients represented by Klutch Sports.

As of 2020, Paul has accepted a position on the United Talent Agency’s board of directors and expanded the agency to represent players in the National Football League alongside the usual NBA players like Ben Simmons and Anthony Davis.

Rich Paul certainly lives up to his name, with a net worth of over 120 million dollars as of August of 2022. Compared to Adele, the difference between the two is 100 million more dollars in Adele’s favor. Most of Rich Paul’s wealth came from the successful contracts with Mark Termini, whose track record was especially beneficiary between 2014 and 2019. He has managed over 20 NBA players and is considered one of the most powerful basketball brokers ever.

As he told GQ, “I made the sacrifice to learn, to be a sponge, and to fail. You have to have a lot of heart to fail—to wake up with doubt and have that drive to want to fail, because within failure comes achievement and experience.”

In 2019, the National Collegiate Athletic Association changed its policy to only hire agents with a bachelor’s degree, which was seen by the media, who coined the name “Rich Paul Rule”, as a mockery of Paul’s own past as a college dropout. Paul himself wrote an op-ed for The Athletic calling the potential consequences a “ricochet” that will affect people of more impoverished backgrounds that are trying to have their big break as agents.

The NCAA was quick to go back on their decision, and post-secondary degrees are longer required for an agent to work with athletes as long as they completed a liability insurance exam and are certified by the National Basketball Players Association.

The spark between the singer and the sports agent was a recent one, but the two seem to be genuinely happy with each other. They were first spotted together while attending an NBA game. Adele and Rich Paul confirmed their relationship to their fans via Instagram. They even attended Anthony Davis and Marlen P’s wedding together. Their latest major endeavor as a couple was purchasing a $58 million home in Los Angeles, which originally belonged to Sylvester Stallone.

So far, Rich Paul’s life appears to be at its best. He bought a home with one of the world’s most financially successful singers, owns an agency that represents several top players in both the NBA and the NFL, and overall seems to be living a more than comfortable life. Paul’s future is looking brighter than ever.