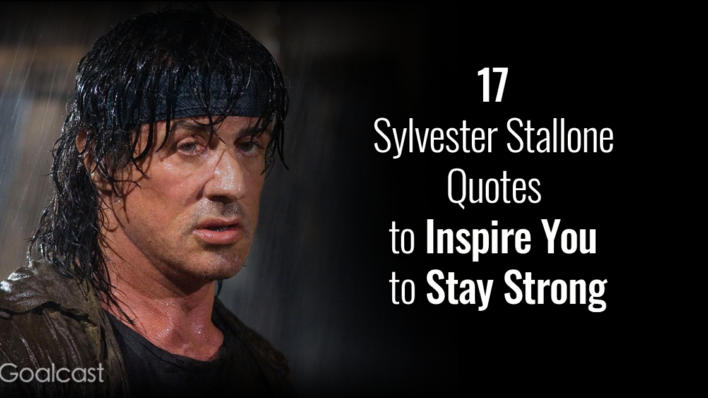 17 Sylvester Stallone Quotes to Inspire You to Stay Strong

Stallone had a tough childhood due to his parents’ hostile relationship and financial crisis and actually spent some of his earliest years in foster care.

He never gave up on his dream of becoming an actor, so while waiting for his career to take off, Stallone worked all sorts of odd jobs and even sold his dog to a family to help ends meet. Fortunately, after Rocky became a commercial success, he came back for Butkus and gave him a part in the movie.

The script for Rocky was written by Stallone himself and even if he was still financially struggling, he refused to sell it unless he was allowed to star in it. Not only he got what he wanted, but also won some well-deserved Academy Awards for his performance.

Sylvester Stallone is a true inspiration for anyone who hit rock bottom, but still believes there is light at the end of tunnel.

Here are 17 Sylvester Stallone quotes to inspire you to stay strong. Consider the source…Don’t be a fool by listening to a fool.

Your spiritual sense will make you either a winner or a loser.

The fear is the fuel that we use for overachievement. If I wasn’t afraid at times, I wouldn’t work as hard.

Remember the mind is your best muscle… Big arms can move rocks, but big words can move mountains…. Ride the brain train for success.

It would be great to be able to pass on to someone all of the successes, the failures, and the knowledge that one has had. To help someone, avoid all the fire, pain and anxiety would be wonderful. Success is usually the culmination of controlling failures.

Going on one more round, when you don’t think you can that’s what makes all the difference in your life.

I have great expectations for the future, because the past was highly overrated.

If you look back at life, I bet you will regret about 80% of your actions. But life consists of all mistakes.

Once in one’s life, for one mortal moment, one must make a grab for immortality; if not, one has not lived.

I stopped thinking the way other people think a long time ago. You gotta think like you think.

Every time I’ve failed, people had me out for the count, but I always come back.

I take rejection as someone blowing a bugle in my ear to wake me up and get going, rather than retreat.

Every champion was once a contender that refused to give up.