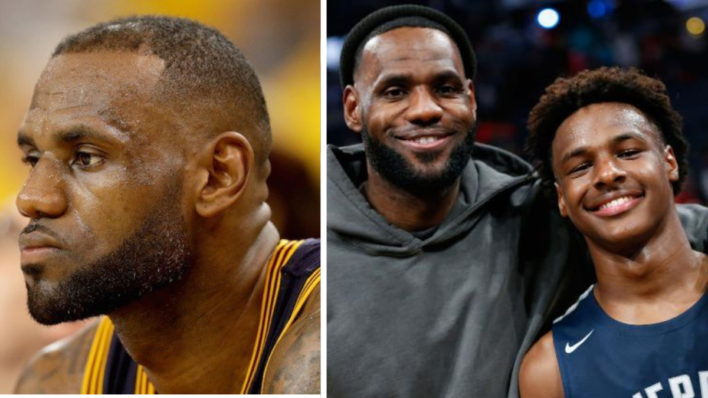 LeBron James reveals the real reason he is so involved in his kid’s lives after receiving backlash for his behavior at his son’s basketball game.
By Shaoni Das    July 15, 2021

LeBron James reveals the real reason he is so involved in his kid’s lives after receiving backlash for his behavior at his son’s basketball game.

Shame if you do, shame if you don’t. That’s a lesson LeBron James learned the hard way following a momentous occasion involving his young son Bronny.

The demanding, judgmental nature of social media has become so intimidating over the last couple of years that public figures can’t make a single move without explaining their decision-making. They’re staring down the barrel of targeted vilification and censure at every waking moment, and if they’re not able to justify their actions well ahead of time, they’re in trouble. It only takes one ill-timed rumor to topple your entire career and tarnish your reputation.

LeBron had to reckon with similarly misguided assumptions over two years ago when he attended his son’s basketball tournament. What was supposed to be a celebratory affair among the James family quickly turned into a contentious ruckus casting doubt on LeBron’s integrity and capabilities as a father.

Here’s how the situation unfolded and why LeBron became labeled as a ‘bad father’ :

In July 2019, LeBron accompanied his 14-year-old son, LeBron Raymone “Bronny” James Jr., to an AAU basketball tournament in Las Vegas. It’s nothing short of a miraculous stroke of luck to have LeBron James himself spectating a basketball game. As anticipated, people were curious to see how LeBron would conduct himself on the sidelines and comport himself at a basketball meetup that didn’t feature him as the MVP.

Well, the Ohio native didn’t disappoint. He donned his kicks and jumped into the pre-game layup lines to shoot some hoops. His incredible throwdowns — captured vividly on camera —  galvanized the crowd and gave them something to be fired up over. It’s not every day that you have LeBron James participate in a warmup routine at a youth basketball matchup, so if you’re fortunate enough to see the man in action, savor the moment.

Unfortunately, savor, they did not. The video went viral and caused quite a stir across traditional news and social media, eliciting accusations of ‘showboating’ on LeBron’s part. Many critics lambasted his activities on the court, condemning the basketball star for engaging in what they deem as undignified and inappropriate behavior. They also took issue with his loud cheering, especially his ballistic demeanor in the wake of his son’s game-winning slam dunk.

According to The Washington Post, Jason Whitlock, the host of Fox Sports 1′s “Speak for Yourself” segmented, voiced his opinion on LeBron’s layups, saying that the Lakers’ champion should be staying in his own lane and not make a “spectacle” of himself. He alleges that LeBron leveraged his son’s moment in the sun to build his “social media brand.” The commentator told his followers that parents shouldn’t “allow their thirst for fame to distract from or exaggerate their child’s performance.”

Barring an extraordinary leap of rationale on Whitlock’s part, it’s futile to expect a personality as animated and expressive as LeBron to suppress his natural energy. Besides, live sports can instigate a wide range of emotions in the most stoic of individuals, so there’s nothing wrong with LeBron boldly enlivening the mood and egging his son on.

What LeBron’s detractors don’t realize is that there’s a particular reason why the athlete prefers to take such a hands-on approach to parenthood. His dad had a number of criminal charges to his name and wasn’t in the picture, causing LeBron to grow up feeling helplessly incomplete and resentful. The absence of a solid paternal figure hurt him deeply, so he promised himself that he wouldn’t dare put his own children through the same ordeal.

I wanted to have kids early, to prove to my father that the way you did it was the absolute wrong way to do it, and I wanted to break the mold to where I want to be there and give them all the life skills.

The 36-year-old essentially took an oath to do right by his children and support them however he could. That’s partly why he wanted his eldest to bear his own name; it was about conferring respect and passing on the values that matter to him a great deal. He obviously can’t guarantee that his children would follow the exact path he’s envisioned for them, but he can hope that they’ll be able to appreciate the “life skills” he’s trying to instill in them.

LeBron will do his best to ensure his kids are able to “experience things that [he] didn’t experience” and that they’re able to seize the opportunities by the horns and succeed in whichever field they decide to pursue. LeBron admits that he can only give them the “blueprint” and lay the groundwork; “it’s up to them to take their own course, whenever that time comes.”

Setting a positive example for his children isn’t just about breaking the mold that’d been put in place by his dad. LeBron legitimately believes that the responsibilities associated with fatherhood allow him to flourish as a ballplayer. For example, he described each of his children as having distinct, divergent personalities that he must cater to in his unique ways; similarly, he must adjust his mode of communication when interacting with his teammates to get the best out of them.

The expression of love is as unique as the love itself

A parent’s love and pride is a rare thing to capture, so no parent should be ashamed for how they choose to convey their depth of love and admiration for their children’s accomplishments. As long as you’re respectful of others in your space and that the recipient of your love is in agreement, you should feel free to express your love however you please. More importantly, your way will be unique to you; it doesn’t matter how it stacks up against someone else’s behavior. Embrace your peculiarities and instincts, and the rest will work itself out.