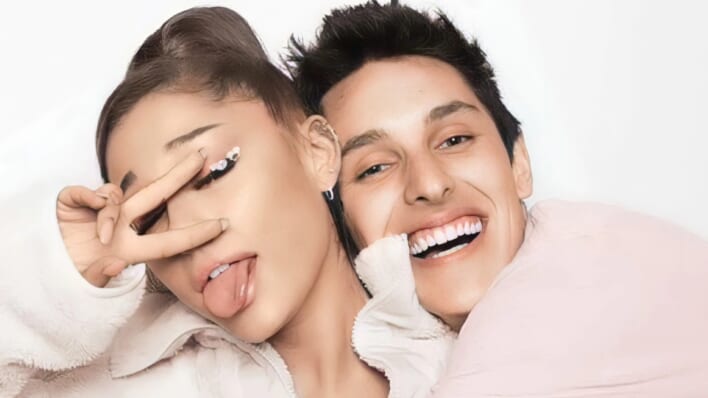 Who Is Ariana Grande Married To? Meet Her Husband, Dalton Gomez

Grande might be a global superstar, but she makes sure to keep her marriage to Dalton Gomez low-key.
By Rhea Kumar    September 10, 2022

Grande might be a global superstar, but she makes sure to keep her marriage to Dalton Gomez low-key.

Ariana Grande has had her fair share of public relationships (we’re looking at you, Pete Davidson). However, the one closest to her heart is also the one she is most hush-hush about. The singer and actress, whose four vocal octave and unique style has made her one of the most recognizable public figures in the world, prefers to keep her love life out of the limelight.

Grande married Dalton Gomez in a small ceremony on May 15, 2021. Grande confirmed to People that it was an intimate ceremony, and the room was “happy and full of love.” But many are wondering who Grande’s husband is, and when did the pair meet?

Who Is Dalton Gomez?

Ariana Grande’s husband Dalton Gomez has been a fixture in Hollywood for quite some time. He’s worked as a successful real estate agent for more than seven years with the Aaron Kirman Group, a luxury firm that boasts celebrity clientele. His profile on the business website says Gomez “holds one of the largest Rolodexes of A-list buyers,” and is known for his “extensive knowledge in the fields of architecture and luxury estates.”

If the name rings a bell, it’s because the Aaron Kirman Group was the focus of the CNBC reality show, Listing Impossible. But if you tune into the show just for a glimpse of Dalton Gomez, you won’t find the 27-year-old, because he isn’t a cast member (sigh).

No stranger to the Los Angeles social scene, Gomez shares many mutual friends with Grande. In fact, he counts singer Miley Cyrus as a close friend, and was featured in a @mileycyrus Instagram story in 2017. Gomez’s Instagram account, unfortunately, is now set to private.

Gomez is from Southern California. But while we don’t know much about his family, his older brother, Dakota Gomez, is a tattoo artist. He also has a younger sister, named Tori Gomez. His family is pretty low-key, and they haven’t said much on social media about their thoughts on the famous singer marrying Dalton.

How Did Ariana Grande and Dalton Gomez Meet?

Grande and Gomez used to run in the same social circles. But it wasn’t until Grande was looking for her current house that the two got to know one another. The singer’s team used Gomez as the real estate agent, and it didn’t take long for sparks to start.

According to US Weekly, “When she saw him, she immediately thought he was cute and very good-looking, and she asked her team to set up an in-person meeting with him… Ariana fell very hard for Dalton shortly after they met.”

While the two tried to keep their romance out of the papers, in February of 2020, the two were caught kissing in a California bar. It wasn’t long after that (March 2020) the couple became ‘public.’

Gomez and Grande Quarantined Together

Grande’s love life has always been under media scrutiny. Look no further than her engagement to Pete Davidson, and her relationship the late Mac Miller. So, many were surprised when Gomez was featured in Justin Bieber and Ariana Grande’s quarantine-inspired music video, “Stuck With U.” Gomez made a low-key, appearance dancing alongside Grande.

RELATED: Who Is Chris Evans’ New Girlfriend, and What Does His Love Life Say About Dating?

Sources say Grande stayed quiet about her relationship intentionally, and wanted to keep things private while the two quarantined together. A source close to Gomez said they were “able to get to know each other in peace.” However, throughout the couple’s relationship, Grande posted sneak-peeks into their quiet courtship.

An insider close to the Grande family says, “Ari’s family is very happy. Everyone loves Dalton. He’s great for her.”

Ariana’s mother, Joan, tweeted some love, writing, “I am so excited to welcome Dalton Gomez into our family! Ariana, I love you and Dalton so much!!!! Here’s to happily ever after! YAY! xoxoxo.”

Ariana’s brother, Frankie, also didn’t hold back his excitement for his little sister. Frankie left a comment on Ariana’s post saying, “I am so happy for you both and so excited to (officially) welcome Dalton into the family! YAY! This is the just the beginning of a long-lasting life filled with laughter and love. Ugh. I love you both! HAPPY ENGAGEMENT!”

Where Did Ariana and Dalton Get Married?

The same way the two have kept their relationship low-key, their wedding was also a lesson in sophisticated subtlety. The singer and the luxury real estate agent tied the knot at Grande’s Montecito estate, near Santa Barbara, California, surrounded by a small group of loved ones.

Grande wore a custom Vera Wang wedding gown and diamond earrings (with one earring upside down to signify “the lowest or the “upside down” moments in her life”). With less than 20 friends and family there to witness their “happily ever after” promises, the room was filled with love and best wishes.

The wedding itself was informal, even the vows appeared to be more from the heart than scripted, according to TMZ.

The fairy-tale relationship became public first through a glimpse of Gomez on Grande’s live stream. It was during that time that fans figured Grande was cozying up to someone to survive COVID-19 lockdown. It’s clear she appreciates her privacy with Gomez, and wasn’t quick to post much about him as yet.

To ring in her 27th birthday, Grande hosted a Midsommar-themed party. That night, she posted many photo-booth snaps that included Gomez.

Gomez’s birthday is on Aug. 7. So, to make it official, Grande posted a greeting on Instagram featuring a carousel of videos of the pair, and some funny photos as well.

Then, on Aug. 30, Grande shared a snap of her and Gomez holding hands following her VMAs performance, where she sang her hit “Rain On Me,” with Lady Gaga.

Ariana Grande confirmed suspicions when she posted photos with Dalton Gomez, accompanied by the caption, “Forever n then some.” Of course, it only took a few scrolls to find out that Grande and Gomez were engaged, as the singer posted a snap of her left hand with a beautiful diamond and pearl ring on it. Celebrities and fans quickly congratulated the pair, and commented on the show-stopping diamond wedding band. Gomez worked with jeweler Jack Solow to create the beautiful ring and pave diamond band.

While the singer has gone to great lengths keep her relationship with Gomez a private matter, many fans want to know the future of their marriage! Kids? A joint-reality show? Maybe Grande will take notes from Taylor Swift and co-write a few songs with her significant other. While everything is purely speculation at this point, one thing that we do know is that marriage hasn’t slowed down Ariana Grande in any way.

The singer is set to star as Glinda in the first film adaptation of the hit Broadway musical Wicked, alongside Cynthia Erivo, who will play Elphaba.

As for Gomez, the real-estate agent has kept a low profile, despite his sudden rise to fame. Maybe that’s the way things will be for a while.