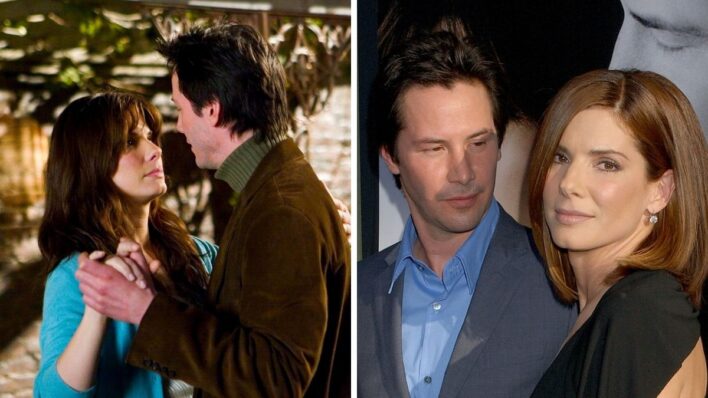 Keanu Reeves and Sandra Bullock’s on-screen chemistry was undeniable. As it turns out, they unknowingly liked each other offscreen too.
By Shaoni Das    July 2, 2021

Keanu Reeves and Sandra Bullock’s on-screen chemistry was undeniable. As it turns out, they unknowingly liked each other offscreen too.

There’s something exceedingly bittersweet about a missed connection.

You meet someone, you become infatuated, you want to follow your heart, but for some reason or the other, the moment passes, and you find yourself overcome with regret and wistfulness. You cope with your yearning by envisioning alternative realities for yourself, creating elaborate, lived-in universes that stand in stark contrast to the actual state of affairs.

Keanu Reeves and Sandra Bullock faced a similar ‘sliding doors’ moment early on in their careers.  They met while filming the classic 90’s action-thriller movie Speed and went on to forge a beautiful and compassionate friendship that’s lasted for 28 years and counting. What’s a little tragic is that they’d genuinely developed feelings for each other on set, but due to a myriad of factors, they refrained from acting on them.

So all that’s left are the ‘what-if’ scenarios and fruitless hypotheticals that inspire nothing but ill-timed disappointment. The entire situation begs the question: why didn’t it work out between Sandra Bullock and Keanu Reeves?

Sandra and Keanu’s quasi-romance came to light during the actress’s appearance on The Ellen DeGeneres Show in 2018. When asked about Speed and its enduring legacy, Sandra immediately sprung to gush about her co-star, saying that she’d been enamored by his presence from day one. Her most vivid memories of the film heavily feature Keanu, and how “sweet” and “handsome” he was.

The Proposal star stated she’d maintained such an innocent yet powerful crush on Keanu that it actively distracted her during certain scenes. All he needed to do was shoot a glance at her, and she’d turn into a mess of giggles. “It was hard for me to be serious. He would look at me, and I’d be like [imitates giggling].”

Sensing the crowd’s intrigue reaction, Ellen probed further into the matter, asking Sandra whether she and Keanu had ever dated. Sandra emphatically denied the suggestion and said Keanu never made a move, though she couldn’t come up with a legitimate reason as to why. She jokingly posited that there was “something” about her that he just didn’t like. The 56-year-old actress also rejected Ellen’s claim that Keanu may have been too “intimidated” by Sandra.

Though she didn’t delve into the particulars of her youthful crush, Sandra did provide clarity into her unwavering friendship with Keanu, saying that the fact that they did not hook up may have actually empowered their friendship to blossom in the way that it did. There’s a truth to her logic: it’s nearly impossible to preserve a traditional ‘friendship’ if you add a messy love affair to the mix. It could be bursting at the seams with passion and electricity, but it’ll still undoubtedly impact the dynamic. Sometimes, it enriches the friendship, and sometimes, it destroys it inside out. You’ll never be able to anticipate any one outcome, so is it really worth the risk?

I think we’re probably friends for that long because we didn’t [hook up].

Keanu visited Ellen’s show only a few months later and addressed Sandra’s adorable confession head-on. As it turns out, he’d also had a crush on his co-star at the exact same time. But, unfortunately, he’d had no idea that his love was reciprocated and that Sandy was likely waiting for him to take the initiative. Talk about an unfortunate twist of fate.  “She obviously didn’t know I had a crush on her either,” he said, causing shrieks of excitement among Ellen’s studio attendees.

When asked why he didn’t pursue Sandra romantically, Keanu said that they were “working,” implying that it would have been unprofessional of them to get swayed by the heat of their emotions. Keanu confirmed that their undeniable chemistry in the movie originated from an authentic place, and that it “was nice to go to work” every day.

He ended the interview by showering praise upon his longtime friend, a “wonderful person, a wonderful actress,” as he put it. He agreed that they’d missed the window, but alas, there’s nothing you can do to mitigate what many would deem a ‘wasted opportunity.’

Ever the gentleman, Keanu went out of his way to not overstep on any professional boundaries, which may seem like fairly standard behaviour today but is nothing short of commendable in a pre-Me Too era. Seeing how this was Sandra’s first leading role, she needed a friend — not a romantic entanglement — to help her manage the stress. Whether or not they’d have fared better as a couple is impossible to answer.

Perhaps they are better as friends anyway?

Ultimately, what Keanu and Sandra have managed to build over the years is far more special than a typical, flash-in-the-pan Hollywood relationship. Of course, it doesn’t necessarily mean that all celebrity romances are destined to fail. It simply means that it’s futile to pore over the hypotheticals and agonize over the roads not taken. They could have dated and struck gold, or they could have dated and crashed miserably; there’s simply no way of substantiating these presumptive ideas.

No matter what, Keanu and Sandra can rest assured knowing they have a thriving, committed friendship they can depend on at any time. Speed wasn’t their only rodeo, either. They reunited for the 2006 film The Lake House, following which Keanu delivered heaps of praise for Sandra yet again, saying that he likes her “tremendously” as a person. No wonder their scenes seem to bristle with chemistry all the time. Sandra echoed the sentiment and called him a “good person.” She’s always loved his company and is still holding out hope for a Speed reunion down the line.

I like her tremendously as a person. I always enjoy watching her work. She is funny as all heck, smart as whip…. It was great to have some life under our belts since the last time we worked together

Besides, it’s outright insensitive to root for Keanu and Sandra’s coupling twenty-five years after their initial ‘window.’ Both are happily partnered with other people, Keanu with Alexandra Grant and Sandra with Bryan Randall, so it’s safe to say that they don’t care the least about public expectations.

Some friendships are more critical than romantic love

It’s purely friendship between Sandra and Keanu, but that doesn’t mean their relationship is any less meaningful or transformative. Society has drilled into our heads that romance is the only path worth pursuing, that it triumphs over other connections such as that of friendship, community work, or professional rapports. Well, it doesn’t have to be that way.

Love can be fickle, fleeting, and, to tell you the truth, unreliable, whereas friendship doesn’t ask for anything specific — just your company and an occasional shoulder to cry on. So it’s high time we begin to nurture and prioritize friendships. Before you know it, these friendships are going to be the most consistent facet of your life.