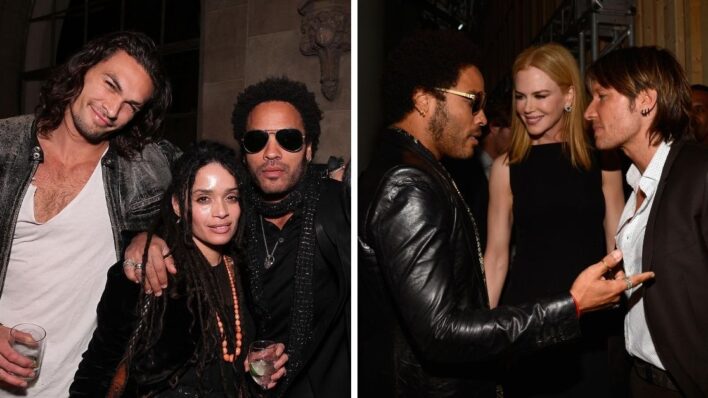 Despite his intimidating appearance, Lenny Kravitz is one of the chillest dudes out there. And his high profile breakups speak for him. From Nicole Kidman to Lisa Bonet, Lenny’s exes have nothing but great things to say about him and we should learn from that.
By Shaoni Das    August 12, 2020

Despite his intimidating appearance, Lenny Kravitz is one of the chillest dudes out there. And his high profile breakups speak for him. From Nicole Kidman to Lisa Bonet, Lenny’s exes have nothing but great things to say about him and we should learn from that.

Handsome, talented, stylish, effortlessly cool — Lenny Kravitz has been blowing our minds for over thirty-five years. He’s a rockstar through and through; just one glance at the actor today would tell you everything you need to know about his persona. But unlike other rockstars, Lenny doesn’t bother with the bad-boy act.

He’s dated some of the most famous women in Hollywood but he’s very rarely come under controversy for his relationships. In fact, some of his relationships proved to be so solid that his exes have nothing but positive words for the singer.

In a land where celebrities are throwing dirt on each other on the daily, it’s genuinely refreshing to see someone who’s managed to remain in the good graces of all his exes. Moreover, it’s even more common for female celebrities to recall their past relationships with horror.

Whereas many describe their ex-partners as abusive, rude, or temperamental, Lenny Kravitz stands out as someone who truly values his romantic connections, regardless of how they pan out. Therefore, it’s key that everyone takes a look at Lenny’s behaviour as an ex-boyfriend and takes some notes for their own relationships.

Many don’t know this but Nicole Kidman had dated and even gotten engaged to Lenny Kravitz in the early 2000s. They had managed to keep this fairly under wraps at the time, so when news broke out more than a decade later that it was indeed Lenny who had taken Nicole’s heart following her divorce from Tom Cruise, questions surfaced.

Was there something that had happened between the two of them that led to the burying of the relationship? The truth couldn’t be further from that assumption. In 2017, when Nicole Kidman worked with Lenny’s daughter Zoe Kravitz on Big Little Lies, she was asked about the experience. Thankfully, there is no bad blood between the pair.

Well, I knew Zoe because I was engaged to her father. It’s all in the family! I love Lenny; he’s a great guy.

In another instance, Nicole, Charlize Theron and Margot Robbie went to the Ellen Degeneres show and played ‘Who Would You Rather’ game as a way to jokingly pair up Charlize with another celebrity. When Lenny Kravitz’s name popped up, Nicole once again spoke about her love for Lenny.

I love Lenny. I so recommend him. He’s lovely.

The love doesn’t only flow from one side either. Lenny also said about Nicole, “She will always be someone in my life.”

Why did the relationship fall through in the first place? Your guess is as good as ours. In a 2007 Vanity Fair interview, Nicole Kidman spoke of a mysterious fiance, saying that “it wasn’t right” to get married to them because the pair “weren’t ready.”

The fact that two people in a relationship can realize as a couple that they’re not meant for each other but still continue to have a beautiful friendship with one another proves that breakups don’t have to be messy. Sometimes all it takes is a tough but rewarding conversation that resets the boundaries in the relationship. You might take your relationship to the next level, or you might figure out that you’re better off as friends.

Lenny’s relationship with ex Lisa Bonet is unlike anything Hollywood’s ever seen. His friendship with Nicole may be pleasant and sweet but his everlasting bond with Lisa can only be described as exceptional. The two got hitched at a young age and had their daughter Zoe shortly after. They divorced in 1993 and Lisa went on to marry and have two children with actor Jason Momoa.

What could’ve been a messy family situation has turned into a force of nature. Speaking on the relationship, Lenny said that though certain moments have been difficult, he’s been able to patch things up with Lisa and has been able to form a true friendship with her.

You go through a marriage with somebody, you break up and it’s very difficult. But [Lisa and I] put the work in and we took the time so that we could become best friends again. Our families are blended.


Lenny Kravitz On The Times

Lisa Bonet on her part echoed the same thought when talking about her divorce. Their daughter was only about five when they split, so the pair had to be extra careful about parenting their daughter. That’s why Lisa chose to be amicable with Lenny — their daughter came first and they had to learn to rebuild their friendship for her sake.


I didn’t want to pass on those heirlooms and this fresh wound of a divorce. … I think there are probably times when these thresholds can either sink you, or you can see who you are and rise and dust yourself off.

Indeed, the entire Kravitz-Bonet-Momoa clan is so well-adjusted that Lenny has even been able to build an awesome, loving relationship with Jason. The pair have become friends or “brothers”, as they put it, so much so that they’re constantly posting birthday tributes to one another and have even professed that they “love” each other.

Relationships can end but love doesn’t have to

Here’s what your ex, and you, can learn from Lenny Kravitz: it can be worth it to maintain good relations with former partners. Of course, in certain situations, especially where abuse or disloyalty or other horrific situations are concerned, it may be best to forget your exes and leave them in the rearview mirror. But if it’s at all possible to do so, then it can be a good thing to have something of a bond with the ex. Not only do you gain a friend for life, someone who knows you to a tee, but you also get to add more love to your life.

Relationships come and go, as they always do. Such is the rule of life but the idea of having animosity or even ‘awkwardness’ with your exes for no reason has to go. Just because the relationship didn’t work out doesn’t mean you should leave someone in the dust. The same romantic love can transform into a platonic one, and both your lives could be better as a result of that. The same attributes needed to hold a relationship together — empathy, understanding, and love — can be deployed to keep a friendship alive through thick and thin. If Lenny Kravitz can do it with ease, no one is stopping you or your ex.