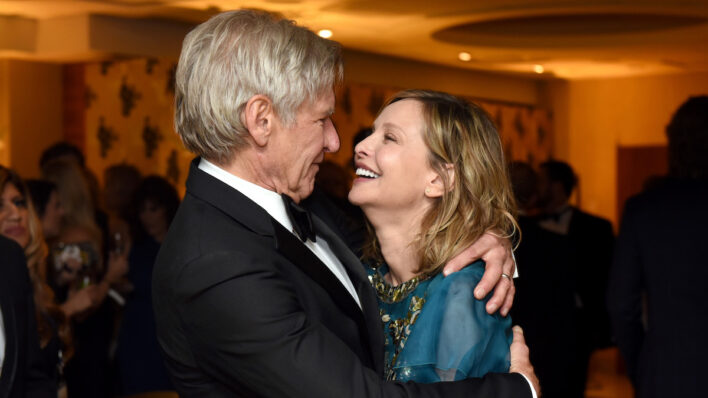 Calista Flockhart refused to judge Harrison Ford’s romantic past and affect her relationship, which made their marriage stand the test of time.
By Barbara Pavone    December 19, 2019

Calista Flockhart refused to judge Harrison Ford’s romantic past and affect her relationship, which made their marriage stand the test of time.

When Harrison Ford and Calista Flockhart first began dating, their budding romance was met with a large dose of skepticism. First, there was the fact that the Star Wars actor is 22 years her senior. Then there was his not-so-perfect relationship past.

Luckily, Flockhart ignored the critics (and the two-decade age gap) and the pair has since gone on to become one of Hollywood’s longest-lasting couples.

Here’s what we can learn from Harrison and Calista’s romance:

Harrison Ford has had no shortage of success — and controversy — in the love department. The Indiana Jones star was first married to illustrator and chef Mary Marquardt from 1964 to 1979 and the couple had two sons together, Ben and Willard.

However, their relationship was anything but perfect. When Carrie Fisher’s memoir was published in 2017, it was revealed that she and Ford had had an affair on the set of 1977’s Star Wars: Episode IV – A New Hope. The infidelity likely played a major role in the end of their marriage, but it didn’t spell out the end of Ford’s quest for love.

Fast forward to 1983 and Ford was saying “I do” to screenwriter Melissa Mathison. They had two kids, Malcolm and Georgia, and appeared to be absolutely smitten with each other, but unfortunately, it wasn’t meant to be.

The pair began living separately in 2000 and, despite reconciling and putting in the work to try to rescue their union, Mathison filed for divorce in 2001.

However, some relationships in life simply don’t last forever and it is important to recognize that. Trying to place blame doesn’t yield positive results and that time is better spent looking forward while learning from the past.

Calista made the first move

Ford and Flockhart first met at the 2002 Golden Globes after the Ally McBeal actress hatched quite the sneaky plan. Deciding to take fate into her own hands — literally — she reportedly “spilled her drink on him intentionally in order to meet him.”

The bold move paid off. Plans were made for a follow-up encounter and her next step was to enlist then-costar James Marsden to take on wingman duties.

Recalling the incident in a 2013 interview, Marsden revealed, “She said, ‘Come to dinner with me and Harrison.’ I’m like, ‘Me, you, and him?’ It turned out to be a small group of us, thankfully, but I ended up as her wingman.”

The group had dinner, then headed back to Ford’s home for drinks and music. “He was giggly and goofy around her but pretty aloof with the rest of us,” Marsden recalled.

It was then that Ford made his intentions known, as Marsden noted, “We had more drinks, he played more music and then at some point he gave me a look that said, ‘OK, you’ve got to get the f*** out of here.'”

She looked past the numbers

Not only did Ford’s romantic past not interest Flockhart, but she was totally indifferent about his age. As she once told Hello! Magazine, “It doesn’t faze me. Sometimes I even say, ‘Wow, I keep forgetting that he’s 22 years older than me’. It doesn’t factor into our relationship at all,” she confessed.

“I like the way he looks first thing in the morning. It’s not handsome, it’s more cute. He looks like a little boy,” she added.

Age was also never a factor for Ford. By 2003, he was absolutely head over heels for the actress, telling Hello! Magazine:

I’m in love. Romantic love is one of the most exciting and fulfilling kinds of love and I think there is a potential for it at any stage of your life.

He became a father to Flockhart’s son

Ford also showed no qualms about becoming a father for the fifth time. In 2001, a year before meeting her future husband, Flockhart had adopted a son. While Ford didn’t expect to become a dad again, he didn’t miss a beat. He happily “inherited” Liam Flockhart because when you love someone, you embrace all aspects of their life.

Speaking with PARADE in 2010, he admitted, “I wasn’t expecting it at all. The unexpected part was certainly true, and the joy part is also true. I think Liam was about 6 or 8 months old when I met him and Calista. We have been together ever since.”

According to the interviewer, “Ford’s eyes light up when he talks about Liam” and his devotion came through in his answers as well. Fords also added that, because of his age, he’s “much better at [parenting] now.”

“On the weekends, I do whatever Calista and Liam want to do. We’ll take a couple of hours on Sunday morning to go motorcycle riding or go for a hike. I just made a birdhouse with my son.”

Their relationship keeps getting stronger

Ford eventually popped the question in February 2009 and the couple said “I do” that June. A decade later and they’re still going strong, enjoying married life and spending plenty of time with their now teenage son. And their bond just keeps getting stronger.

When Ford was in a near-fatal plane crash in 2015 after a plane he was piloting suffered an engine malfunction, his wife rushed to be by his side.

After the crash, Ford said, “My wife, who is a wonderful lady, understands my passion for aviation, she understands what it means to me and flies with me to this day.”

It’s that understanding and support, paired with Flockhart’s ability to shut out critics and not judge Ford based on his past, that are at the very core of their relationship.

By focusing on their love, rather than outside voices, they were able to put all of their energy into building a strong foundation and nurturing a relationship that has managed to stand the test of time. Their love story is a lesson in never judging a book by its cover and listening to your heart. Aligning our actions with our instincts can strengthen the foundation of the relationships we form in our lives.

If you’re feeling like a hopeless romantic after reading this article, check out our long list of love quotes!