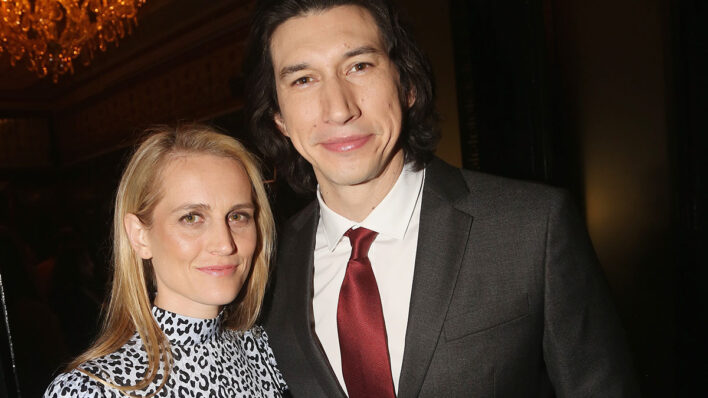 Adam Driver’s low-key marriage to wife Joanne Tucker led to them giving back to the armed forces in a most surprising way.
By Barbara Pavone    December 6, 2019

Adam Driver’s low-key marriage to wife Joanne Tucker led to them giving back to the armed forces in a most surprising way.

Since landing his breakout role on HBO’s Girls back in 2012, Adam Driver has seen his acting career take off. In the years that followed his successful run on the show, he has played Kylo Ren in Star Wars, snagged an Oscar nomination for BlacKkKlansman, and made a splash on Broadway, scoring a Tony nom for Burn This.

All throughout this exciting journey, he’s had a special someone by his side: his wife, fellow actress Joanne Tucker. You might recognize her from Girls or Showtime’s Billions, but you likely haven’t seen much of her actually with Driver.

That’s because, as a couple, the two have managed to stay far, far away from the public eye. So far, in fact, that they actually hid the birth of their son for two whole years! But it’s not just their excellent secret keeping that makes Driver and Tucker a dream team.

Here’s what we can learn from Adam and Joanne’s love story:

Unforeseen circumstances can be a blessing

Long before Adam Driver became a star of both the small and big screen, he was an aspiring actor. Even before that, he was a proud member of the military.

That’s right: Driver joined the Marine Corps following 9/11. He was just 18 at the time and, as he told US Veterans magazine in 2017, “September 11 happened and all my friends were like, ‘Let’s join the military’, and I was the only one who actually did.”

He enlisted and that’s when an unexpected turn of events led him to acting… and to his future wife.

Before deploying, Driver injured his sternum in a mountain biking accident and, after two years of service without time in the field, he was discharged. While he was disappointed, he had no reservations about his next steps.

As he told Rolling Stone, he knew exactly what he wanted to do. “I was like, ‘I’m going to smoke cigarettes and be an actor when I get out,’” he recalled. “Those were my two thoughts.”

Humor (and cheese) can be an incredible bond

Once Driver was discharged, he applied to one school and one school only: the prestigious Juilliard performing arts conservatory in New York City. He was accepted and while there, met fellow acting student Joanne Tucker. Their bond began to blossom and it grew stronger thanks to a large dose of humor. And cheese.

As Driver told Broadway.com in 2009, “She taught me what Gouda cheese is. And that you shouldn’t talk with your mouth full and spit on the sidewalk.” He also made sure to share his passions with her. He added, “I told her about Rolling Stone and how it could be interesting and entertaining.”

Plenty of celebrities try (and fail) to keep their private lives private, but Driver and Tucker are absolute pros. In 2013, they tied the knot in a secret destination wedding. Then they accomplished the unthinkable when they managed to have a child without the public knowing.

As Page Six reported in 2018, the couple welcomed a son some two years prior. According to insiders, the pair shared their pregnancy journey on private Instagram accounts with one secret photo showing Tucker and her sister pregnant with the caption, “Sisters. Nearly matching everything. #babyshowerx2.”

The outlet also noted how, in a 2017 interview, Driver actually let the news slip, then quickly tried to cover his tracks.

These days, Driver may be devoted to acting, but he’ll never forget his military roots. It’s a deep-set passion that his wife happily shares in. So much so that, while they were still students, they founded a non-profit called Arts in the Armed Forces in 2006.

Joanne Tucker doesn’t just merely support her beau’s biggest passion, she’s also a key player in his mission to give back. While Driver is listed as the organization’s founder, Tucker is its artistic director and they both devote a considerable amount of time to the cause. Over the years, they’ve raised money and organized top theater productions for active service members, veterans and their families.

As Driver told the Guardian, it’s more than just a passion project, it’s a life-changer. The couple’s goal is “to bring thought-provoking theater-based troop entertainment to an audience that wouldn’t normally be associated with theater.”

Because, as he told the military audience at the charity’s 2019 A Raisin in the Sun production:

I know it’s a common adage in acting to say ‘we’re not saving lives,’ but I think art does save lives. It just brings people out of the dark.

It also brings people together. Not just the soldiers and veterans the non-profit aims to help, but Driver and Tucker themselves. Since meeting, they’ve shared humor, a love of family, a passion for the arts, and a devotion to giving back.

Helping others has helped their relationship as well, proving that while it’s important to have your own projects and interests, it’s even more imperative to support (and share in) each other’s biggest passions. When you choose to be a team, you should be a team in all aspects of life.