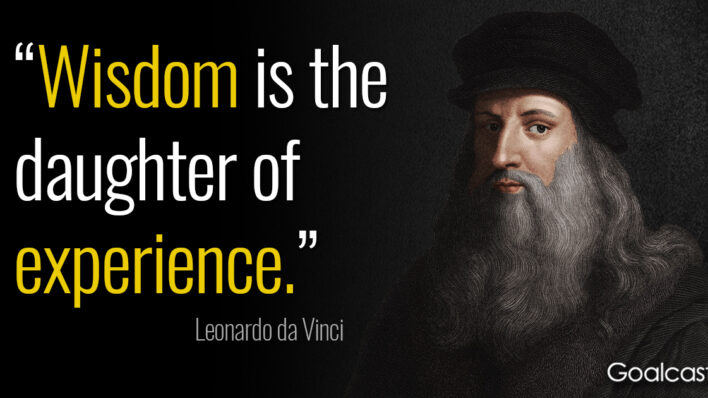 Leonardo da Vinci, the “universal genius,” was a painter, architect, sculptor, military engineer – a famous artist and curious mind with an insatiable desire for knowledge who became a symbol of the Renaissance.]

Born in Florence as an illegitimate child, Leonardo received his early education in a painter’s workshop; Andrea del Verrocchio was the one to introduce young da Vinci to the art world. But art alone couldn’t cover Leo’s unlimited curiosity of his surroundings, so he also studied the laws of science and nature.

A lot of Leonardo’s ideas and inventions are captured in notebooks that prove his thinking and inventiveness were way ahead of the times he lived. His ideas influenced countless other brilliant minds.

Leonardo da Vinci’s fame was indisputable during his lifetime and his legacy will remain powerful. Here are 20 Leonardo da Vinci quotes that will increase your thirst for knowledge. One has no right to love or hate anything if one has not acquired a thorough knowledge of its nature.

Study without desire spoils the memory, and it retains nothing that it takes in.

I love those who can smile in trouble, who can gather strength from distress, and grow brave by reflection.

Why does the eye see a thing more clearly in dreams than with the imagination being awake?

Though I may not, like them, be able to quote other authors, I shall rely on that which is much greater and more worthy — on experience.

One can have no smaller or greater mastery than mastery of oneself.

The noblest pleasure is the joy of understanding.

The greatest deception men suffer is from their own opinions.

Learning is the only thing the mind never exhausts, never fears, and never regrets.

The deeper the feeling, the greater the pain.

He who wishes to be rich in a day will be hanged in a year.

In rivers, the water that you touch is the last of what has passed and the first of that which comes; so with present time.

Time abides long enough for those who make use of it.

Learn how to see. Realize that everything connects to everything else.

He who does not oppose evil, commands it to be done.

Anyone who conducts an argument by appealing to authority is not using his intelligence; he is just using his memory.

Wisdom is the daughter of experience.