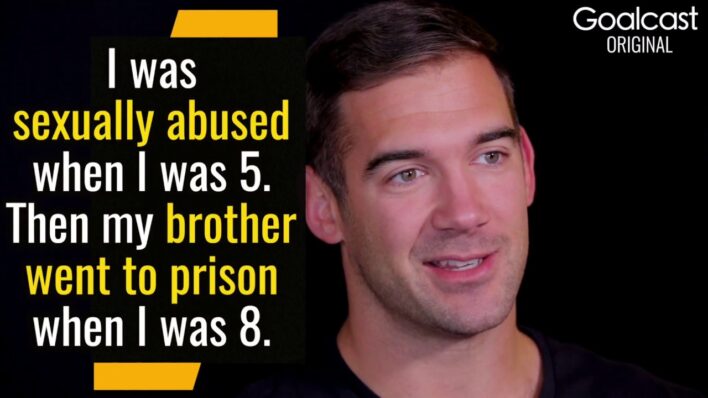 Lewis Howes | How I Turned Abuse Into Triumph

Lewis Howes – Lean into the Dream In this emotional interview, Lewis Howes speaks candidly about how he was sexually
By Goalcast    September 15, 2017

Lewis Howes – Lean into the Dream In this emotional interview, Lewis Howes speaks candidly about how he was sexually

Lewis Howes – Lean into the Dream

In this emotional interview, Lewis Howes speaks candidly about how he was sexually abused as a child and how, instead of victimizing himself, he decided to take control of his life, turn his experiences into triumph, and accomplish all his goals.

I was sexually abused when I was five. Then my brother went to prison when I was eight, so for me this was hard to grow up in a small town without many friends, feeling abused already from the sexual abuse that I faced, and just feeling disconnected in general from my family, and from my friends, and the world. It made me very defensive. It made me want to get as big, and as strong, and as fast as possible, and successful as possible, because the more I achieved, the more I felt like a worthy man. The bigger I got, the stronger I got, the more I felt like no one could ever hurt me again, and this darkness that I was feeling from all the pain and disconnection as a child, I put it into sports, and said, “I’m going to master this, and I’m going to be the best that I can be.” Don’t

Now, it drove me to be great at my sports. I was a two-sport All-American. I was All State in multiple sports. I played professional football, but it left me with this deep sense of unfulfillment and darkness inside, because I was doing it all for the wrong reasons, and this is where more pain and disconnection was created. I would achieve at the highest levels feeling smaller and smaller inside, and I started to get really nasty and aggressive in a lot of instances. I would take this aggression out on the basketball courts, so every few days I would go play pickup basketball until one day I was in a basketball game. It was a heated game. I was guarding a guy who was much bigger than me and older than me. We were both aggressive, fouling each other, blocking each other, holding each other, talking trash, and then it got down to the final point. It was game point for both teams. He had the ball down and he was about to score a layup, so I grab his arm and foul him so he doesn’t score, a hard foul.

But going back and forth, everyone was doing this. All the sudden, he turns around and headbutts me. He gets in my face. He headbutts me, and I see stars, and it must’ve been just like the weeks and weeks of buildup from these arguments and the frustration I was feeling in my relationships and personal life that I couldn’t hold back anymore. I literally pummeled this person to the ground. I had him in a headlock. I was punching him in his face, until someone got us up and got me off of him. I saw this huge gash of blood coming out of his face, and I remember just shaking and trembling in that moment, thinking to myself, “What have I done?” I allowed my ego to get so hurt and bent out of shape to continue to fight, to continue to talk back, to continue to be aggressive, and to want to physically punch someone.

I was terrified. I ran back to my place, was just looking in the mirror shaking thinking like, “Who are you? Why are you doing this? Why are you so upset? Why are you getting so mad to want to actually physically hit someone?” I remember just feeling so ashamed, and so upset with myself, and so mad that I allowed my anger to get the best of me. For 25 years I never told anyone what happened to me, and in return what happened was me getting angry in situations, me getting defensive, me getting in fights, me being aggressive, me shutting down. 25 years after I was sexually abused I finally opened up about it to someone, and it was terrifying. I was trembling. I was crying. I was shaking. I didn’t want to do it, and it was one of the scariest things to reveal to someone else.

The more I started to share my most vulnerable moments as a man, the more connected I became to every person I told it to, the more bonded we became, the more they revealed about themselves that they have never shared with anyone else. It was like this deeper sense of understanding between myself and them when I started to open up in a vulnerable way and share about sexual abuse. The scariest thing in the world was actually sharing, but it’s the thing that set me free. You know, there’s this challenge because as boys growing up we in general face a lot of peer pressure from other boys telling us to not be a wussy, don’t cry, don’t act scared, man up, all these things. Then if you play sports, you have coaches, some coaches that say, “Don’t show pain. Don’t show emotion. Get back up quickly. Don’t act like you’re hurt. You got to go harder. You got to go stronger,” so it’s just conditioning. In the locker room it’s the same things.

In high school, you’ve got to protect yourself from bullies, so we’re constantly conditioned from media, coaches, friends, peers, parents who tell us to not show emotion, so when we’re conditioned over, and over, and over again to man up, to step up, to not cry, we start to harden. We start to put on masks, and these masks are a fake image of who we truly are. I’m not saying we need to be crying every single day and weeping constantly, but to truly be vulnerable loving man is to reveal yourself, so the moment I started to share and let it go was the moment I took my life back and had power over that experience, as opposed to that experience having power over me. I think you can’t overcome sexual abuse, or rape, or any type of experience like that until you start to share.