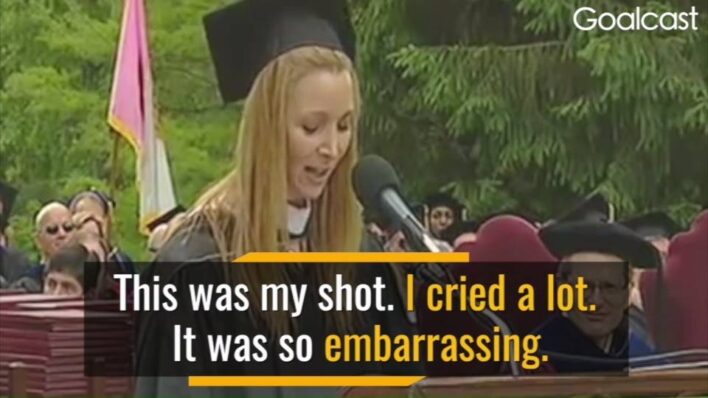 Lisa Kudrow: I Got Fired From Frasier

Lisa Kudrow – Find Your Reason Lisa Kudrow delivers a commencement speech about overcoming adversity and believing in yourself regardless
By Goalcast    September 26, 2017

Lisa Kudrow delivers a commencement speech about overcoming adversity and believing in yourself regardless of the circumstances because it all happens for a reason.

After two days of rehearsal, I got fired. I got fired from Frasier. The one everyone knew was going to be a hit, and it was. This time, it was really hard not to think that it wasn’t meant to be, my career as an actress. It was so embarrassing. Jim Burrows and those producers had to fire me. They were nice, but, “Well, it’s just not working and we need to replace you.” “Okay. Sure. No, don’t feel bad.” This was my shot. I cried a lot.

A couple of months later, I was almost completely out of money. Then I got a call from a friend, the actor, Richard Kind, who I’d met when I had guest starred on an episode of Mad About You, starring Paul Reiser and Helen Hunt, who said, and this is exactly he sounds, “I heard what happened. I don’t know how you get up in the morning. How do you even get out of bed, get dressed, walk out the door, and show your face?” Yeah, I was getting up in the morning and leaving my apartment, so maybe I was coping better than I was expected to. That’s a good sign. I understand that because the 20s, they are a bad time in your life when you’re really getting acquainted to self-doubt when there’s so much seemingly at stake. So, let me reassure you. It’s not supposed to be easy. You’re supposed to have moments of uncertainty about which path to take, because the 20s are full of crossroads.

Back to me. When one door closes, another door always opens. It really does. That’s what I would tell myself to keep those moments of doubts, only moments. It worked. I kept going. Then it all changed. After many auditions, I was the second person cast in the pilot called Friends Like Us, which would later be changed to Friends. Jim Burrows also directed this pilot and the first 10 episodes of friends.

One day, the six of us were talking with Jimmy, exchanging the time I got fired stories, and Jimmy told them mine. “Well, she’s got the worst one of all. She got fired from Frasier. Well, it’s a good thing you got fired or you wouldn’t have been on this show.” He was right. And it was a good thing I didn’t get Saturday Night Live. And that Romy and Michele, that that pilot didn’t work out. And every other disappointment that happened. They were actually more like guideposts that kept me on my path.

Oh, and after I got fired from Frasier, I went to a birthday party and, feeling like I had nothing at all to lose, I flirted with a guy who was way out of my league. We dated and on Thursday, Michel and I will have been married for 15 years and we’ll celebrate with our remarkable 12 year old son. So, thank God I got fired. Maybe there is a reason for everything. I think there is.