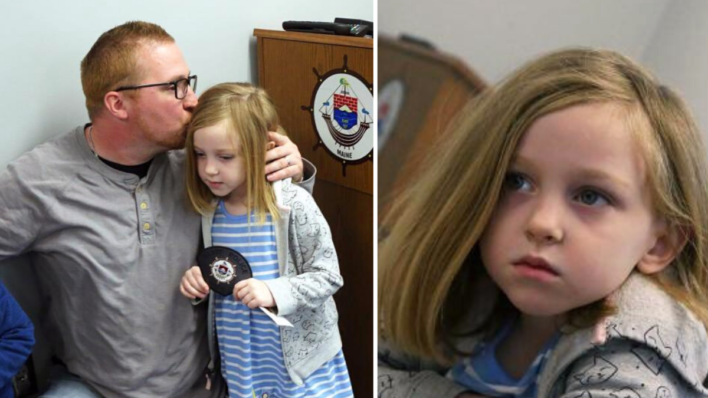 When her father was going in and out of consciousness one little girl took control and saved his life.
By Sophie Tolias    June 19, 2022

When her father was going in and out of consciousness one little girl took control and saved his life.

April 12th was not Kyle Semrau’s day to die. The day started like every other day, except Kyle’s 6-year-old daughter Macie refused to go to school.

This was unusual for the kindergartner, but she was missing her dad and it was the one-year anniversary of her grandmother’s death, so her parents agreed.

Kyle had come home from his night job, and he wasn’t feeling very well due to an ongoing issue with his sinuses and lungs, so the plan was to spend a quiet day at home with Macie and his 4-year-old son, Caleb, while his wife went to work.

But later that morning, he took a turn for the worse and was struggling to breathe and losing consciousness repeatedly. When he briefly came to, he yelled incoherently for help.

Thankfully, help was near. During on of Kyle’s conscious moments, Macie asked him to tell her his cell phone’s password so she could unlock the device. She then opened Google and typed: “Eliot poliz.”

I pressed this button and typed Eliot Police, and I hit call. I don’t want to say this, but I thought he was going to die.

Judy Smith, who picked up the phone at the Eliot Police Department, says Macie “knew everything,” including her home address, her dad’s name and age, and how police could best get to him inside the basement room where he had been resting.

“Macie called the police and I was crying a lot, and then she (Judy) heard me crying on the phone and then she said it was OK,” Caleb told Seacoastonline.

While they waited for help to arrive, Macie figured out how to unlock the basement door and told her little brother to close an upstairs door to keep the family dogs away. Police arrived two minutes later and rushed Kyle to Wentworth-Douglass Hospital.

After three days recovering in the hospital Kyle is now resting at home and has had lots of time to reflect on the coincidences that lead to his survival.

“Just incredible all around. I’m very lucky, obviously because of my daughter and son and the (police) response. It was quick,” Kyle Semrau told Seacoastonline.

How Teaching Kids to Be Aware Can Save a Life

Kyle can’t recall most of the emergency except for an officer applying pressure on his back to help keep him conscious and Macie asking for his password. It was after being treated in the hospital that he opened his phone and saw his browser history contained a misspelling of the phrase “Eliot police” that he realized the extent of his daughter and son’s assistance.

“It was incredible. I was in tears myself,” he said.

RELATED: Rail Worker Notices Distressed Young Woman And Acts Just In Time To Save Her Life

Kyle hopes that sharing this story will encourage parents to teach their children important information about where they live and who they live with.

If I can say anything about this whole experience, it’s for everyone to teach kids about awareness. If I hadn’t taught my daughter certain things she wouldn’t learn in school, this outcome could have been completely different. She is, and will always be my hero.

The family also can’t help but pause and think about the fact that the incident occurred on the one-year anniversary of the death of Kyle’s wife’s grandmother. Did divine intervention play a hand in the day’s events? “She just happened to be home. The whole thing, the whole incident, is just incredible,” Kyle said.

Kids can be heroes too
“Real heroes are all around us. They face challenges with fear and grace.” — Robert Carey
Tags
Share
← Prev Post Next Post →