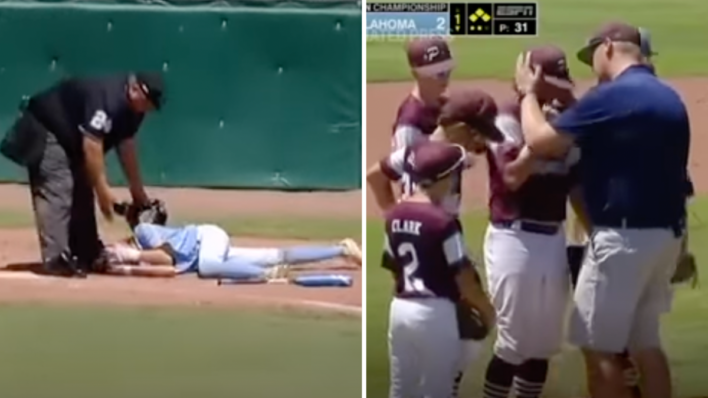 During a Little League game, one player threw a pitch that seriously hurt the batter; his response isn’t what anyone expected.
By Sophie Babinski    September 20, 2022

During a Little League game, one player threw a pitch that seriously hurt the batter; his response isn’t what anyone expected.

Sportsmanship is about more than just winning and losing. It is about the fair and generous treatment of others. When circumstances make it hard to see beyond anger and competitiveness, it takes a kind-hearted athlete to stick to the values of sportsmanship.

How a Little League Player Proved the Importance of Sportsmanship

The Little League World Series is watched by households across the world. There is a lot of pressure on the young players participating to perform well, which can be hard to handle at such a young age.

In one game, Texas was playing against Oklahoma, when something scary happened. Texas pitcher Kaiden Shelton threw a pitch that landed hard on Oklahoma batter Isaiah Jarvis’ helmet. The hit was captured on film, and it looked intense. Jarvis immediately buckled under the pain, spun around, and collapsed onto the ground, clutching his head. The impact was so hard that it actually knocked off Jarvis’ helmet — and onlookers were shocked.

Miraculously, Jarvis didn’t have a concussion and was able to continue playing the game. However, pitcher Shelton was very shaken. His throw had caused a fellow player an enormous amount of pain, and he couldn’t shake the feelings of sadness and guilt. In fact, Shelton was so visibly upset that Jarvis decided to leave his base to go and comfort the boy.

He approached Shelton, threw his arms around him in a hug, and told him he was doing a great job. Jarvis even gave Shelton a tip on how he could improve his game under pressure, telling him, “just throw strikes and take deep breaths.”

It takes some people their whole lives to develop the compassion these two young players showed each other during this Little League game. Any adult could look at the way these two athletes carried themselves in a tense moment and try to replicate that in their own lives.

Caring about your fellow man and encouraging them to do the right thing is always the best way to handle things — in Little League and in the big leagues.