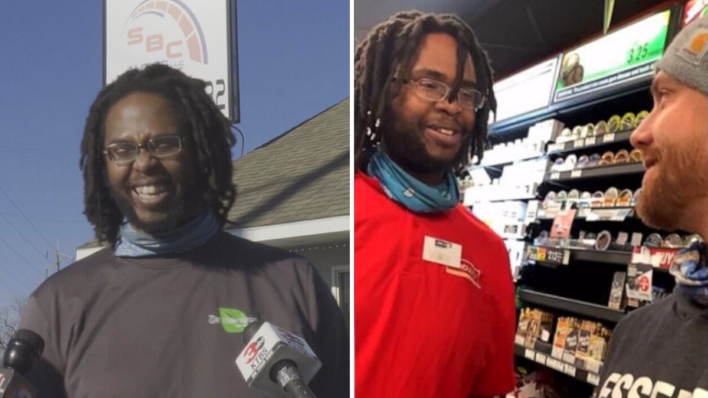 One Lyft driver helped change a cashier’s life after learning that he walks 11 miles roundtrip for work.
By Sophie Tolias    March 24, 2022

One Lyft driver helped change a cashier’s life after learning that he walks 11 miles roundtrip for work.

It all started when Ed Hays requested a Lyft from his home in Shreveport, Louisiana, to get to the gas station where he works in Bossier City for the night shift.

“It was about 6 o’clock at night and it was pouring rain,” Daniels told Good Morning America. “On rainy days, people are normally in a foul mood. [Hays] came in [my car] . . . he was so excited. I asked, ‘How’s your night going?’ He said, ‘It couldn’t be better. I just found out I got promoted at my job to lead cashier.'”

How a Lyft Driver Helped Change a Passenger’s Life

As they chatted, Hays, a 28-year-old father of a little boy, told Daniels that he typically walks to work and back — approximately 11 miles, roundtrip.

Daniels, who also works in sales but was laid off amid the COVID-19 pandemic, was encouraged by Hays’ positive attitude and strong work ethic. So, he posted a TikTok video sharing the story of how they met.

We got to get on this man’s level.

David Daniels in his TikTok video

Within hours, the footage had been viewed over 100,000 times.

After arranging with his friends Beau Witkowski and Derrick Thomas at SBC Autos in Bossier City to get a car for Hays for $5,500, Daniels launched a GoFundMe. On top of the money raised for the car, another $3,200 was raised which Daniels also gave to Hays.

Daniels surprised his new friend with the car, a 2001 Mercury Grand Marquis.

Hays, who also works at a restaurant prepping meals, said he was looking forward to giving his son a ride in their new car.

@_daviddanielsmusic One of my most inspiring moments as a Lyft driver. #lyft #uberdriver #fyp #inspiring ♬ original sound – David

How One Ride Inspired Two Men in an Incredible Way

Hays said his message to those reading his story is to “never give up.”

Don’t let anything deter you from your goals. You can always push through.

Hays called Daniels a saint for everything that came into his life after that ride. But Hays isn’t the only one that received something he needed that evening. Inspired by Hays’ positivity and work ethic, in his TikTok video Daniels says, “I wish I knew a hundred people like this guy.”