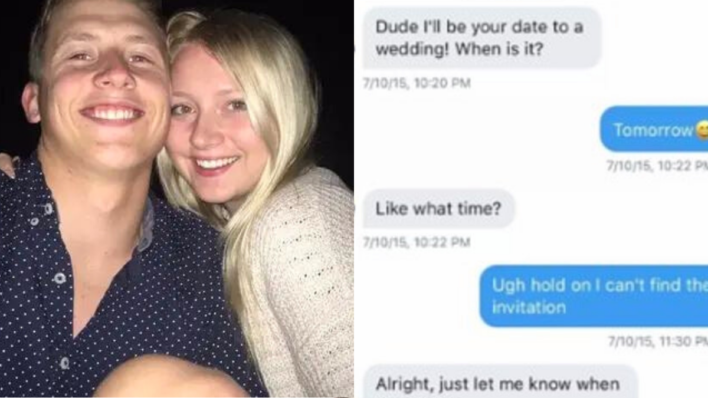 Woman Asks Twitter To Find Her A Date For A Wedding – 2 Years Later, The Man Who Replied Does This

A few direct messages and two years later, one woman got engaged to the man who replied to her tweet.
By Lindsey Staub    February 17, 2022

A few direct messages and two years later, one woman got engaged to the man who replied to her tweet.

After a breakup left Madison O’Neill without a date to a wedding, she took to Twitter to try to find a replacement. Little did she know that two years later, she would be engaged to the man who volunteered to be her plus one.

“Once we broke up, I realized I was dateless and I didn’t really want to go alone,” Madison said.

She went on Twitter and asked if anyone wanted to be her date to a wedding the next day, without the expectation that someone would actually reply.

I figured if anyone responded it would be a close friend that would come with me just for fun.

Charlie Dohrmann, who went to high school with Madison, saw this as an opportunity.

“He thought I was cute in high school but never had the courage to talk to me, but he saw that tweet as an opportunity and thought, ‘Hey why not,’” she said.

Charlie direct messaged Madison offering to be her plus one, and though she was hesitant to actually take him, she decided to give him a shot.

“I ended up saying yes because I figured that having one awkward date wouldn’t be the end of the world, and I might as well go for it,” she said.

From followers to lovers

The date wasn’t awkward at all; they both had an amazing time. Soon after the wedding, the two began to date seriously.

I definitely wouldn’t have guessed that we’d end up where we are now.

Two and a half years later, Charlie proposed to Madison in San Diego, where he lived while serving in the Navy.

“I thought he was kidding at first and when I realized he wasn’t, I freaked out,” she said. “I didn’t see it coming at all.”

Madison decided to share her story where Charlie and her first connected: Twitter. Her tweet explaining how she and Charlie met went viral as users gushed over Charlie’s boldness and the couple’s meet-cute.

“It’s amazing to see so many people wishing us luck and telling us how cute our story is,” Madison said. “It’s definitely making this whole engagement that much more exciting.”

What started as a desperate call for a date ended in marriage, all because of Charlie’s willingness to put himself on the line and respond to Madison’s tweet.

His courage allowed him to go after what he wanted, and now not only does Madison have a ring on her finger and a viral social media post, but she also has a date to every wedding in the future.

go after what you want
One moment of courage can change your life forever in unexpected ways.