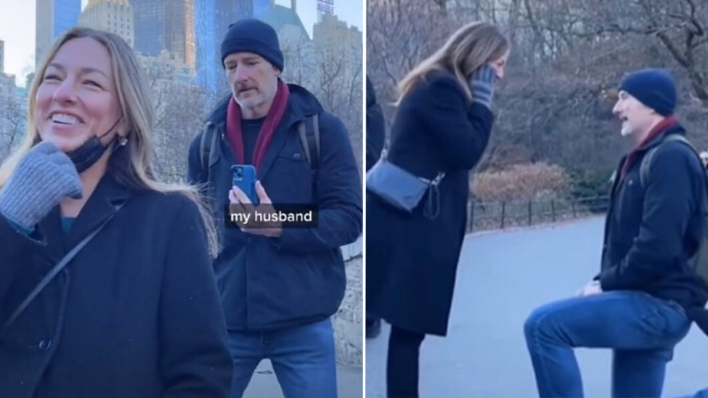 One husband traveled across the globe in an unforgettable gesture that reminds us that love truly has no boundaries.
By Bryan Liquor    February 14, 2022

One husband traveled across the globe in an unforgettable gesture that reminds us that love truly has no boundaries.

Mother of four, Katie Prentiss of Portland, Oregon, was looking forward to escaping the Beaver State and spending some good old mom-daughter time with her oldest girl Abi in New York.

According to the Daily Mail, during a stroll through Central Park, Prentiss stopped on a footbridge so her 17-year-old could snap a picture of her. However, a man suddenly emerged in the shot behind her and changed the meaning of the entire trip.

When Abi had her turn around, she saw that It was none other than her husband of 25 years, Brian. Prentiss was floored.

“What are you doing? Why are you here? I’m so confused,” the video captured her asking.

That would be nothing compared to what happened next.

Dropping down to one knee, Brian said to her, “You didn’t get a romantic proposal the first time around. So I thought I’d try again by flying somewhere far and surprising you.”

“You are one of the most amazing, fearless, beautiful, wonderful people I have ever met,” he continues.

With that, he placed a ring on her finger as they both shared a warm embrace as onlookers clapped. Everyone was teary-eyed- including Abi, who can be heard sniffling off-camera.

In a video since seen millions of times over on TikTok, a bemused Prentiss captioned that she found out that the sweet moment was months in the making.

My daughter and husband have planned this for months. How is this my life?!

“I thought this was a scene out of a romantic comedy with that transition 😍😍😍,” posted one.

“THIS should be normalized! A second engagement just to reaffirm [you’re] STILL in love with me,” touted another.

One commenter called it setting the ultimate parental example.

I love this. It’s amazing for kids to see the love their parents have for each other (still)❤️❤️❤️😭😭😭.

Love is a renewable resource

When it comes to unconditional love, comfort can be a great thing. Being able to drop the act and be yourself is a feeling like no other.

However, you always want to keep an eye that comfort doesn’t turn into complacency by taking the special union you share for granted.

So, while you don’t have to globetrot or buy a house, the simplest gesture, words of appreciation, or occasional love quotes can keep the romance burning strong.

show people you love them
“One word frees us of all the weight and pain of life: that word is love.” – Sophocles
Tags
Share
← Prev Post Next Post →