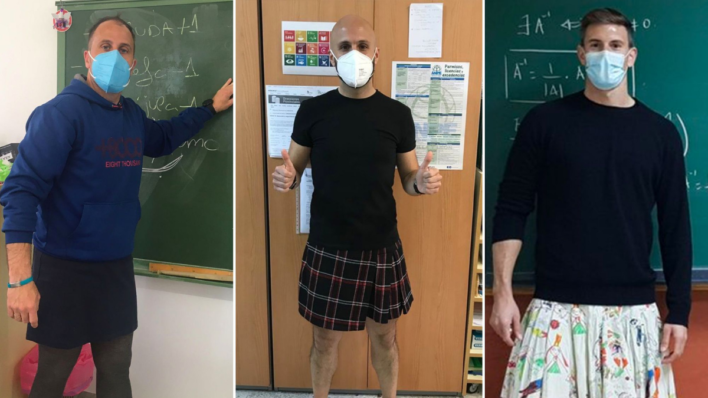 Student Gets Expelled For Outfit, Male Teachers Wear Skirts To Class In Protest

Teachers in Spain are going to class in skirts after a student was sent to a school psychologist for wearing
By Joel Balsam    June 3, 2021

Teachers in Spain are going to class in skirts after a student was sent to a school psychologist for wearing one and another was a victim of homophobic slurs for wearing a sweater.

Student expelled for wearing a skirt

In Fall 2020, Mikel Gómez decided to go to his school in Northern Spain wearing a skirt over black pants. He wanted to wear one to support feminism and trans people.

During math class, Gómez got warm, so he took off the pants underneath the skirt. The student was promptly sent to the school psychologist.

Here’s Gómez explaining the situation on TikTok (in Spanish).

In solidarity, students across Spain wore skirts in protest of the student’s expulsion.

Teachers got in on the action, too, with one posting a photo of himself teaching in a skirt with the hashtag #LaRopaNoTieneGenero, which means clothes don’t have a gender.

Clothes don’t have a gender

Fast forward to May 2021 and a student was bullied and a victim of homophobic slurs at Virgen de Sacedon primary school in Valladolid for wearing a sweatshirt with anime characters on it. The student took the sweater off, but two teachers — Manuel Ortega and Borja Velázquez — wouldn’t let the situation go.

They picked up where #LaRopaNoTieneGenero left off and started wearing skirts to school again in support of their student.

Velázquez told El País that their decision to wear skirts was to continue the ongoing debate about tolerance and diversity. He also said the teachers at his school were making sure to tell their students that it’s just fine for boys to enjoy cooking in the kitchen and have long hair, and the same goes for women who like soccer and have short hair.

A global issue that needs to be stopped

There’s no question that the issues of discrimination based on clothing extends well beyond Spain. Need examples? How about the student sent home from school for wearing a turtleneck. Or what about the girl sent home for being curvy?

Perhaps it’s too late in the school year for teachers to follow their Spanish colleagues in North America, but I wouldn’t be surprised if this becomes a more global trend next year.