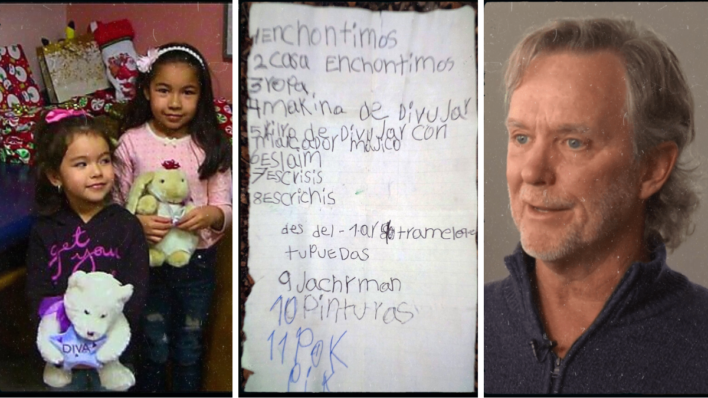 One man did the unexpected after he found a little girl’s Christmas letter to Santa inside a wayward balloon.
By Amber Dowling    December 21, 2021

One man did the unexpected after he found a little girl’s Christmas letter to Santa inside a wayward balloon.

How many children with parents who can’t afford to give them the Christmas of their dreams write letters to Santa Claus? And of those, how many children actually experience a Christmas miracle, brought on by a stranger?

That’s exactly what happened back in 2018 when Randy Heiss was walking his dog, Feliz, behind his ranch in Patagonia, Ariz. Heiss was hiking along when he noticed pieces of a red balloon caught in some sacaton grass. He approached with the intention of cleaning it up when he noticed a piece of paper attached to the balloon string.

“My Spanish isn’t very good, but I could see it was a Christmas list,” Heiss recalled to the Washington Post, noting the name “Dayami” was on the outside. He had no idea who had written the list, but it sparked his inner child: he too had written letters to Santa and sent them via balloons as a kid.

Heiss was so intrigued that he wondered whether he could find out who wrote the letter, and if so, whether he could help make their holidays a little brighter. “It really touched my heart to find it and I said, ‘Well, how in the heck am I going to be able to figure out how to make contact with this little girl and make her wishes come true?’” Heiss revealed to NBC News.

Tracking down the family

Heiss put his sleuthing skills to good use. He knew his property was close to the border, where the city of Nogales, Mexico sat on the other side. Based on the wind pattern he was sure that’s where the balloon had come from, but he brought the note home to his wife, who spoke Spanish, for more clues.

They figured the note was from a girl named Dayami, who was hoping for some Enchantimals and a dollhouse, along with some art supplies, slime, and clothes. Heiss posted a copy of the note on Facebook in hopes that someone might be able to help him track down the family.

When no one came forward, the man took his search to the next level and contacted a local radio station in Nogales. They responded right away and shared the story of the found balloon. The very next day the station informed Heiss that they had located Dayami- an eight-year-old girl- and her family.

It just changed my entire day. Instead of going back to my office in Bisbee, I went with my wife to Walmart.

At Walmart, Heiss loaded up the cart with almost everything on the list (the dollhouse was sold out), as well as some extra toys for Dayami’s four-year-old sister Ximena. Then the man and his wife drove across the border with their haul and headed straight for the radio station.

The gift of giving

At the station, Heiss and his wife learned that Dayami had been writing balloon letters to Santa for years. The pair didn’t want to spoil the magic, so they revealed themselves as “ayudantes de Santa,” a.k.a. Santa’s helpers. “It was a beautiful, beautiful experience,” Heiss added. “Quite healing for us,” he added.

Being around children at Christmastime has been absent in our lives. It’s been kind of a gaping hole in our Christmas experience

The 60-year-old and his wife lost their only son nine years prior, and they had no grandchildren or the hopes of ever-extending their kin. To them, this was a chance to rekindle their own kind of Christmas magic.

“We now have friends for life,” he continued. “And, for a day, that border fence with its concertina wire melted away.”

Sometimes it can be hard to believe that something right in front of you isn’t just a coincidence and that maybe it was meant to be. Heiss felt the connection to Dayami because of his own childhood, but it was in following that connection, embracing the gift of giving, and trying to track down the family that his own story came full circle.

So the next time that inner voice is telling you to dig deeper, do something kind, or learn more about the story at hand, maybe try to follow it instead of quashing it. You never know- that coincidence could open a door to the very connection you yourself have been missing.