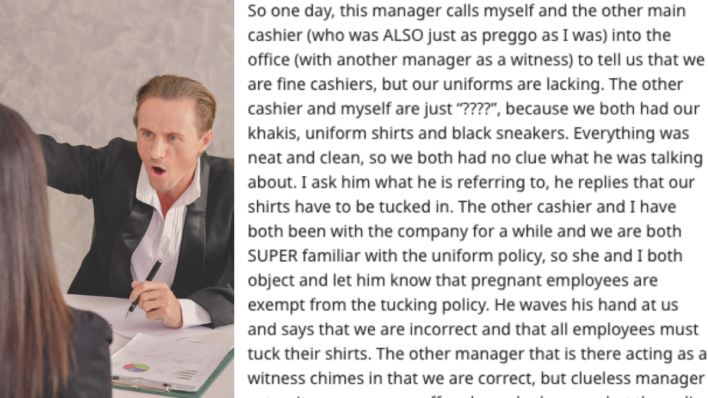 A couple of employees were told by a manager that no exceptions would be made to the uniform policy, despite
By Joel Balsam    June 16, 2021

A couple of employees were told by a manager that no exceptions would be made to the uniform policy, despite the fact that they were eight months pregnant. So the employees complied, only for the manager to be yelled at by his boss and fired shortly thereafter.

The manager was ‘clueless’

In a Reddit post, user u/zzz0mbiez describes an incident at work in 2011 that is as outrageous as it is comically ridiculous. In the post, she says she was working at a “big pet store” when a manager took her and a fellow employee aside to speak to them about their uniforms.

“The other cashier and myself are just ‘????,’ because we both had our khakis, uniform shirts and black sneakers,” she wrote. “Everything was neat and clean, so we both had no clue what he was talking about. I ask him what he is referring to, he replies that our shirts have to be tucked in.”

The thing was, the “painfully clueless and stupid” manager was wrong — pregnant employees were exempt from tucking in their shirts in the policy, and the staff told him that but he didn’t listen.

“The other manager that is there acting as a witness chimes in that we are correct, but clueless manager cuts witness manager off and says he knows what the policy is and that previous management was just being lax (they weren’t, pregnant employees were actually exempt),” she added.

Compliance, but with malicious intent

So the employees obliged, doing their very best to keep their pants up despite their huge bellies. The writer had her pants hiked up to just below her breasts, and the other cashier had hers tucked into her pants that were held together with a hairband, exposing her leopard print underwear.

“For those unfamiliar, by eight months pregnant you are basically Violet from Willy Wonka with an internal Oompa Loompa kicking you in the bladder every 20 mins,” she wrote

When regular customers saw their outfits, they were shocked.

“For two full days (and part of that first shift after clueless manager left for the day), customer complaints to corporate about our treatment rolled in and coworkers called the employee hotline to report clueless manager,” she wrote.

On the third day, the manager returned to work and asked why they were dressed like that.

“¯\(ツ)/¯ ‘You told us to tuck our shirts in,'” the writer recalls saying. “He gets red in the face and beelines to the office. He calls us into the office IMMEDIATELY and starts going off on us for not taking the uniform policy seriously.”

Mid-tirade, the district manager arrives and laces into the lower ranking manager for ignoring the uniform exemption for pregnant women.

“Turns out clueless manager ruined district manager’s day off because of all the complaints that came in about the two pregnant employees forced by a male manager to show their underwear/pregnancy attire in public due to an absurd uniform policy,” she wrote. “…the sheer number of complaints in such a short time meant that the regional manager was breathing down the district manager’s neck to resolve the issue.”

The writer added that the manager didn’t allow them to use stools while working the cash, saying “if you can lean, you can clean.”

The manager was forced to apologize and buy the employees lunch. He was also sent to HR training, but it doesn’t look like it helped — the manager was fired soon after for not allowing an employee with a pacemaker to use a pin-backed nametag.

“This guy was actually insinuating that this employee was just looking to make trouble and get special treatment over a name tag.”

Pregnancy is hard enough, nobody needs a pesky manager telling them what they can wear, especially when they’re already being compliant with the policy. Thankfully, customers stood up for these employees and justice was served. This is definitely a good reminder that if you see someone treated unfairly, speaking up can really make a difference.